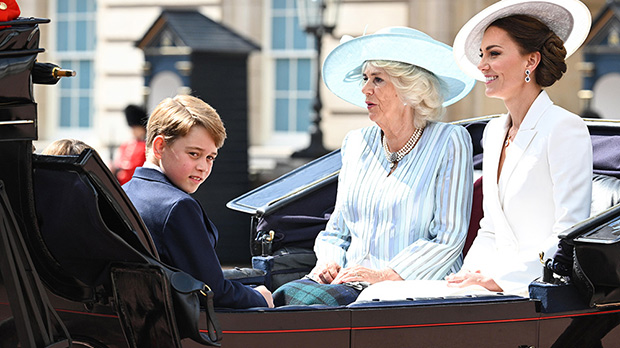 
Kate Middleton was an absolute vision as she honored Queen Elizabeth II’s 96th birthday at the Trooping the Colour parade on June 2. Kate rode in a carriage alongside her mother in law, Camilla, Duchess of Cornwall. The Duchess of Cambridge was all smiles in a white blazer and matching fascinator hat. She had her hair pulled back into a sleek bun for the procession. Kate’s three children, Prince George, Prince Louis and Princess Charlotte, were seated across from her for the carriage ride.

Trooping the Colour is an annual event that marks the official birthday of the British Sovereign. Queen Elizabeth turned 96 back on April 21. However, this year, the occasion was even more special, as it kicked off a weekend full of events for the Queen’s Platinum Jubilee. Earlier this year, she officially reached 70 years of service, making her the first British monarch to celebrate a Platinum Jubilee.

At the Trooping the Colour, Queen Elizabeth is guided down the Horse Guard’s Parade in a carriage. After being greeted by a royal salute, she inspects the troops, and a flag is processed down the ranks of soldiers. The soldiers then march past the Queen and she heads back to Buckingham Palace to watch a fly-past of the Royal Air Force. She is expected to be joined by other members of the Royal Family on the balcony for the end of the event.

Kate, her husband, Prince William, and the kids are all expected to be at various events to honor the Queen’s Platinum Jubilee this weekend. Prince Harry, Meghan Markle and their two children, Archie and Lilibet, have also traveled back to the U.K. from California to take part in the celebrations. However, since they are no longer officially Royal Family members, it is unclear how involved they will be in the public events of the four-day festival.