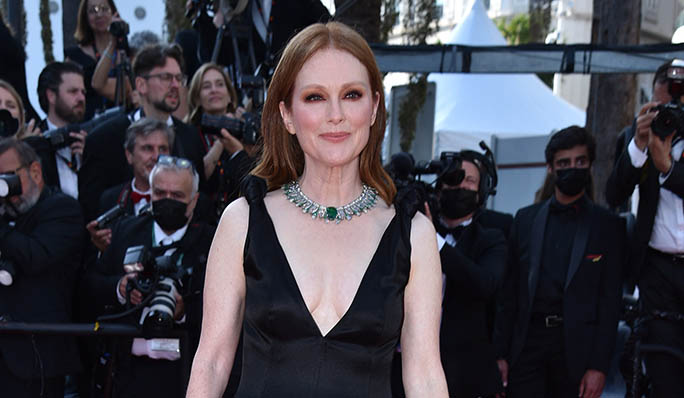 Julianne Moore made an elegant arrival on the red carpet at the 2022 Opening Ceremony and “Final Cut” screening during the 75th annual Cannes Film Festival in France on Tuesday.

The “Lisey’s Story” star donned a stunning black dress by Bottega Veneta. The chic number hav a plunging V-neckline, wide straps and a stylish drop waist that was streamlined with subtle pleats. The gown also had a major standout feature — side slant pockets as well as sweeping, slightly ruffled hemline.

To place emphasis on her ensemble, Moore swept her straight tresses back behind her ears and accessorized with a green statement choker necklace. The length of her dress didn’t allow for a peak at her footwear choice, but it would be no surprise if she grounded things with towering stilettos or strappy sandals.

The Academy Award-winning actress might be known for her casual off-duty looks, however she has easily become a red carpet fixture over the years. Moore usually steps onto the scene in glam gowns from designers like Chanel and Balenciaga.

The Cannes Film Festival celebrates and previews upcoming international films. Held annually on the French Riviera, this year’s festival, which runs May 17-28, will see a return to its standard live format for the first time since 2019 — though Russians with government ties have been banned from attending in solidarity with Ukraine during the ongoing war. On the starry front, the 2022 Festival will host more Hollywood-focused films than it has since 2019, where highly anticipated movies “Top Gun: Maverick,” “Elvis” and “Armageddon Time” will be shown. Additionally, the prestigious Palm d’Or award, the Festival’s highest prize, will be judged by a jury led by actor Vincent Lindon.

See how high heels have evolved through the years.