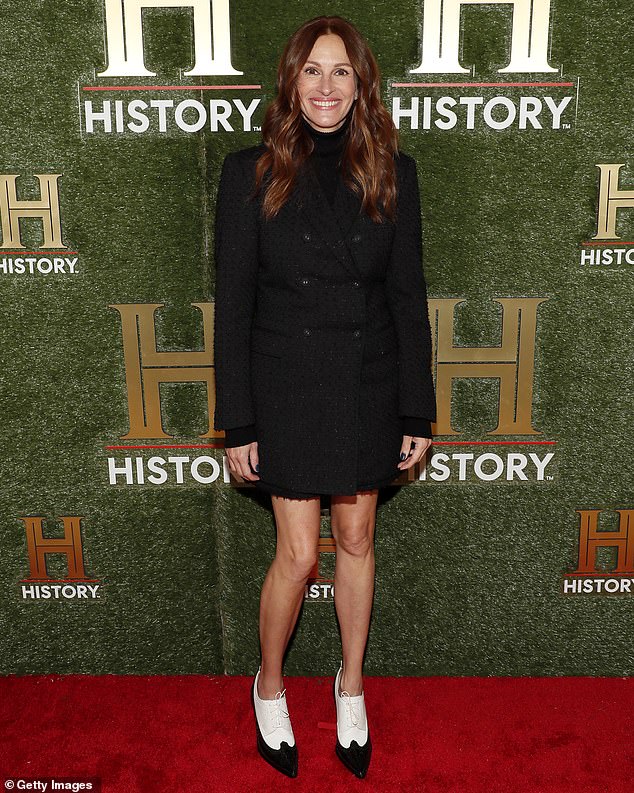 The 54-year-old actress opted for a tweed ensemble as she prepared to be one of the talented speakers at the star-studded event.

George Clooney, 61, donned a classic gray suit while his wife, Amal, 44, wore an eye-catching red pantsuit as they also stepped onto the red carpet.

Beautiful: Julia Roberts, 54, turned heads in a classic tweed ensemble as she arrived at History Talks 2022 in Washington D.C. on Saturday

The Pretty Woman star, who had been asked to be a speaker at the event, looked classy in a black tweed blazer which she paired with a matching mini skirt.

To stay warm in the cool, early fall temperatures, Julia added a black, long-sleeved turtleneck sweater underneath the blazer.

She slipped into a pair of stylish, black and white heels that were secured with thin white laces.

The actress was all smiles as she posed for a photo session when she arrived at the red carper before entering the venue.

Her brunette hair was parted in the middle, and flowed past her shoulders in elegant waves.

Special guest: The Notting Hill actress was one of the speakers at the event on Saturday 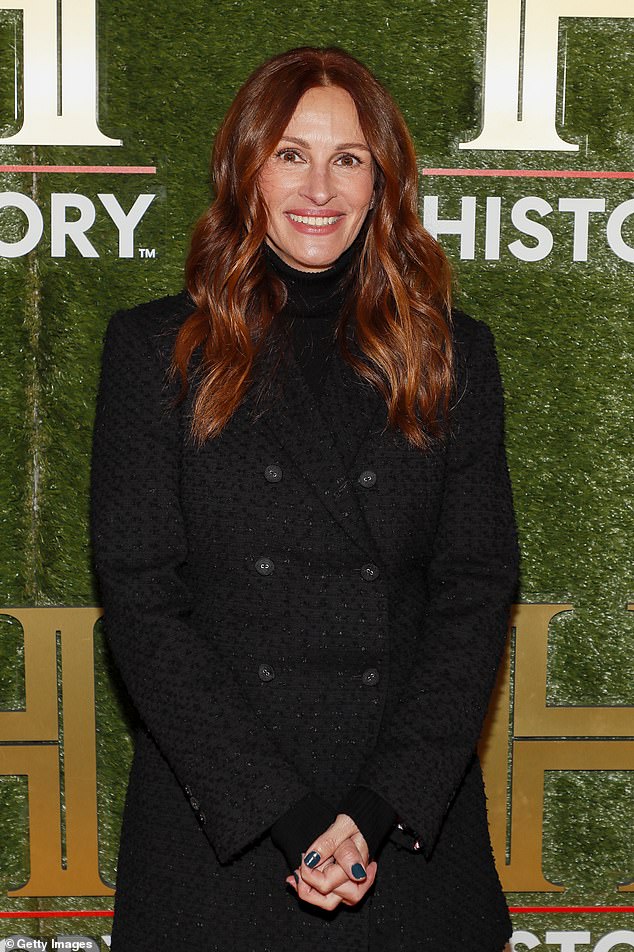 Elegant: The beauty opted for a black tweed blazer, long-sleeved sweater, and tweed mini skirt to attend the event 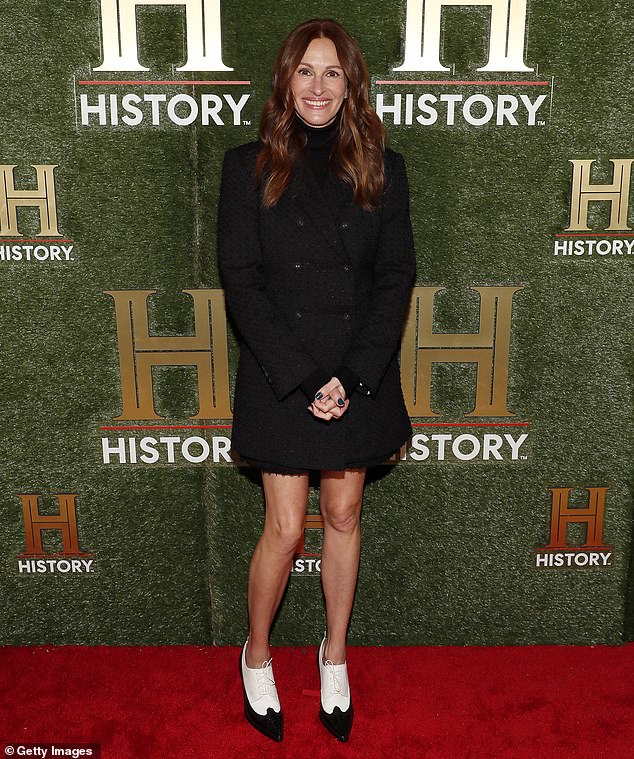 Excited: Julia was all smiles when she arrived at History Talks 2022 and posed for photos on the red carpet

George and Amal Clooney were other speakers at History Talks. The couple are both known for their involvement as human rights activists.

The professional and successful lawyer turned heads in a vibrant red jumpsuit that fell down past her ankles.

The form-fitting, sleeveless ensemble was comprised of a red lace material, and molded to her slim physique. She added a pair of gold, pointed heels to complete her look.

Her makeup was classically done, and a touch of red lipstick was worn to coincide with the color scheme of her outfit.

The Ocean’s Eleven star also dressed to impress in a gray suit, which he wore with a black dress shirt. The couple lovingly posed for pictures together, and took time to take a few quick snaps with other guests on the glamorous red carpet. 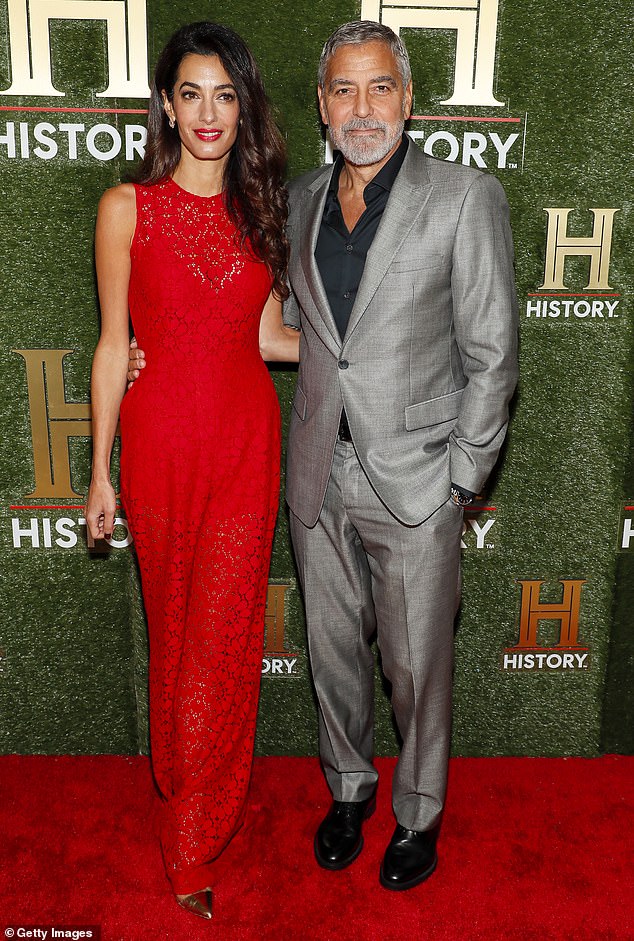 Stylish couple: George and Amal Clooney were a fashionable duo as they arrived at History Talks 2022 together on Saturday

Big night: The couple were also asked to be speakers at the event in Washington D.C. 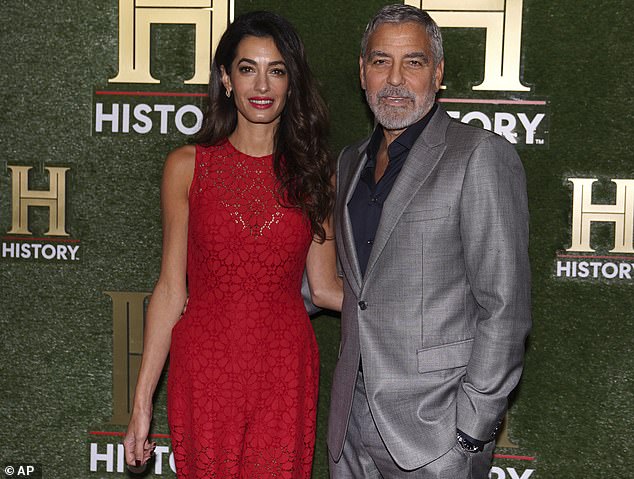 Working hard: Both the Hollywood actor and the professional lawyer are human rights activists

George and Amal were seen with presidential historian and Pulitzer Prize winner, Doris Kearns Goodwin, who will also speak during the night.

History Talks is a live event that allows audiences and viewers to listen to a variety of speakers such as global leaders, authors, filmmakers, and trailblazers in the world, according to the official website.

The special limited series also, ‘explores our nation’s past to understand our present and illuminate our future.’

Other stars that attended the event include A Star Is Born actor Bradley Cooper, who opted for an all-black, satin ensemble. 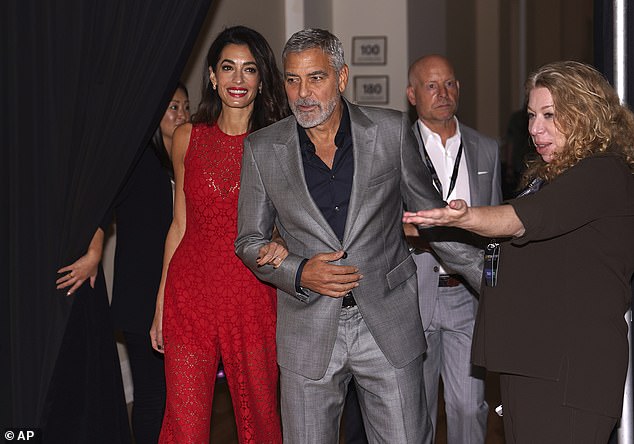 Arriving: George and Amal were pictured arriving at the venue arm in arm in Washington D.C. 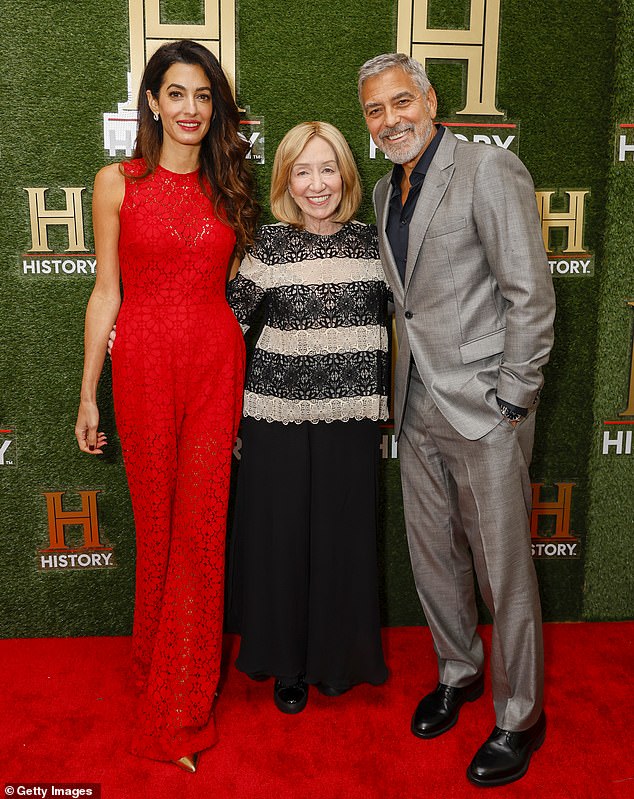 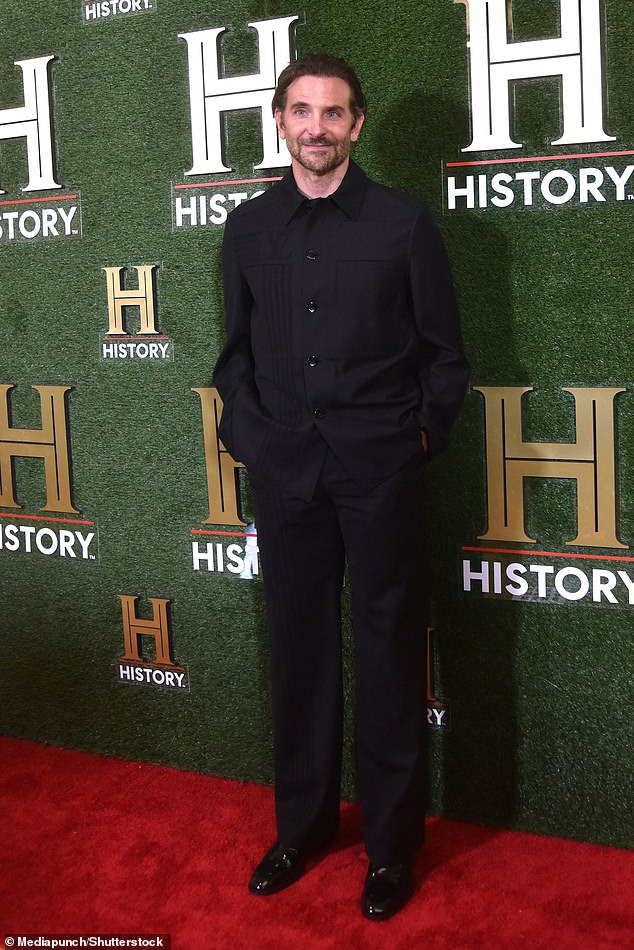 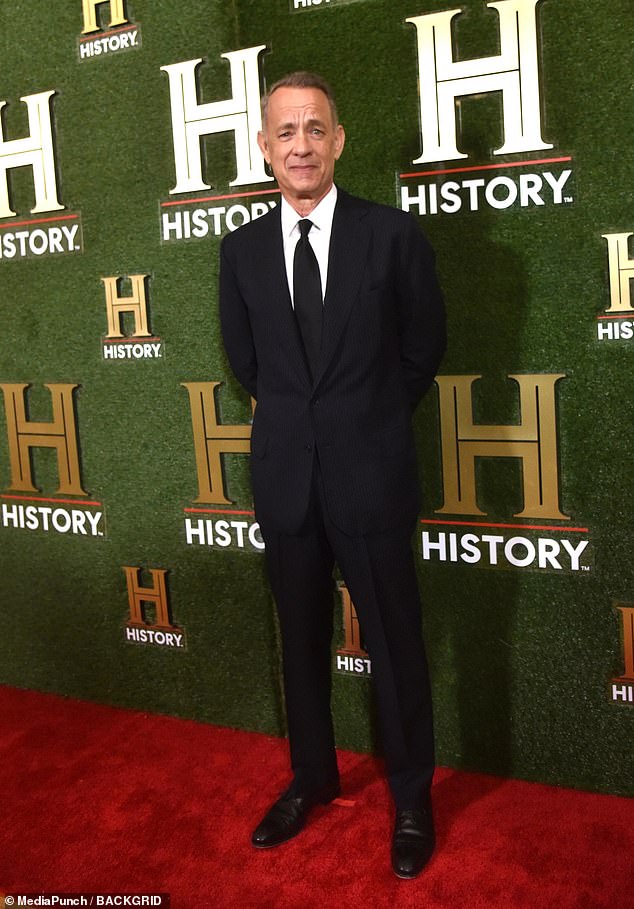 Professional tennis players and siblings, Serena and Venus Williams, were pictured arriving at the special occasion.

Venus donned a black jumpsuit along with a black and white-striped blazer with pointed shoulder pads.

Her sister, Serena, chose an outfit with a touch of color, and wore a moss green, short-sleeved dress that fell down towards her ankles. The duo also were seen posing with Bradley Cooper.

Twilight alum, Anna Kendrick, looked stunning in a dress with various hues of blue, green and orange. Real Housewives Of Beverly Hills star, Garcelle Beauvais, also opted for a pop of color in a matching trouser and blazer set. 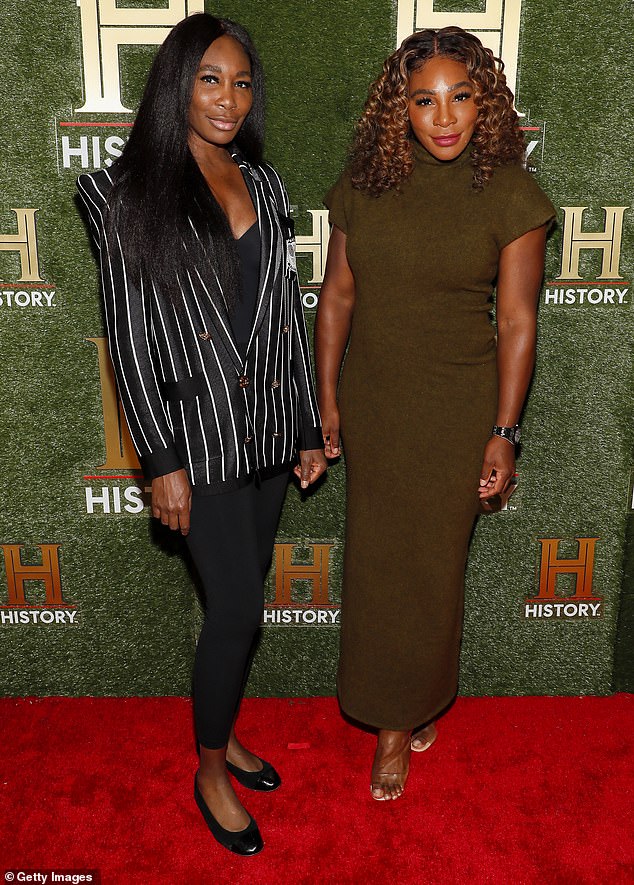 Colorful ensembles: Anna Kendrick and Garcelle Beauvais turned heads in outfits that had a pop of color

Elton John’s husband and filmmaker, David Furnish, donned a black suit and kept the look casual by adding a white T-shirt underneath.

Bradley was later pictured with his five-year-old daughter, Lea, whom he shares with supermodel and ex, Irina Shayk. 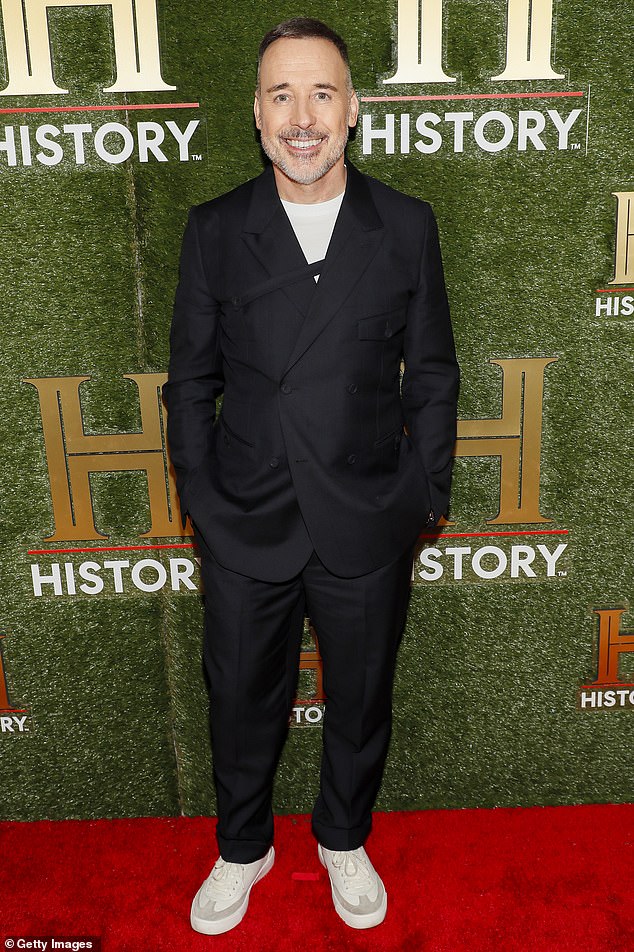