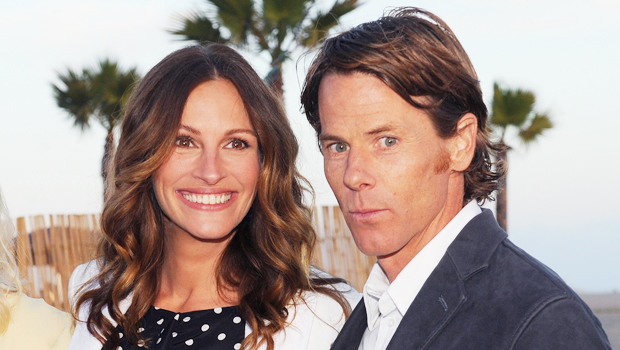 
Julia Roberts has an Oscar, three children, and an adoring husband, but none of it has come easily, and now she’s revealing how they’ve made it last for over 20 years. Julia married Daniel Moder on July 4, 2002, and she says they’ll celebrate their twentieth anniversary with “more kissing” according to an interview with SiriusXM’s Jess Cagle. It turns out that Julia and Danny’s secret to relationship success is simple but important. “Two bathroom sinks and a lot of kissing,” she said.

Julia’s interview comes just ahead of the April 22 release of her new Starz series Gaslit, a star-studded ensemble period piece surrounding the Watergate scandal. “Well, you know, I love a good juicy ensemble, and I felt like there’s so many great stories inside this particular show,” she told Cagle about her choice to take the on the role of Martha Mitchell, wife of United States Attorney General John N. Mitchell. Julia also praised an unrecognizable Sean Penn, who plays her husband in the series, saying that “to be with Sean was incredible.”

As for her real-life husband and married life, Julie and Danny seem to be just getting started! They first met on the set of her movie The Mexican in 2000, where Julia was starring and Danny was working as a cameraman. Julia and Danny were both previously married — Julia to singer Lyle Lovett from 1993-1995, and Danny to Hollywood makeup artist Vera Steimberg until 2002. The couple are known for keeping their family life private, but they do step out in public for the occasional date night.

Julia’s rapidly-growing set of teenagers are also a source of great pride and joy for the actress, and she said in an April 13 interview with Extra that she’s looking forward to it. “I mean, it makes me a little lightheaded,” she said. “You say that, I mean, I’m completely excited for them. It’s really thrilling and I wasn’t lucky enough to have a college experience. And so to see how it’s happening for them is really fascinating. And yeah, I’m just, I’m excited for them,” she said.

Patrick Stewart’s Wife: Everything To Know About Sunny Ozell, Plus His 2 Previous Marriages