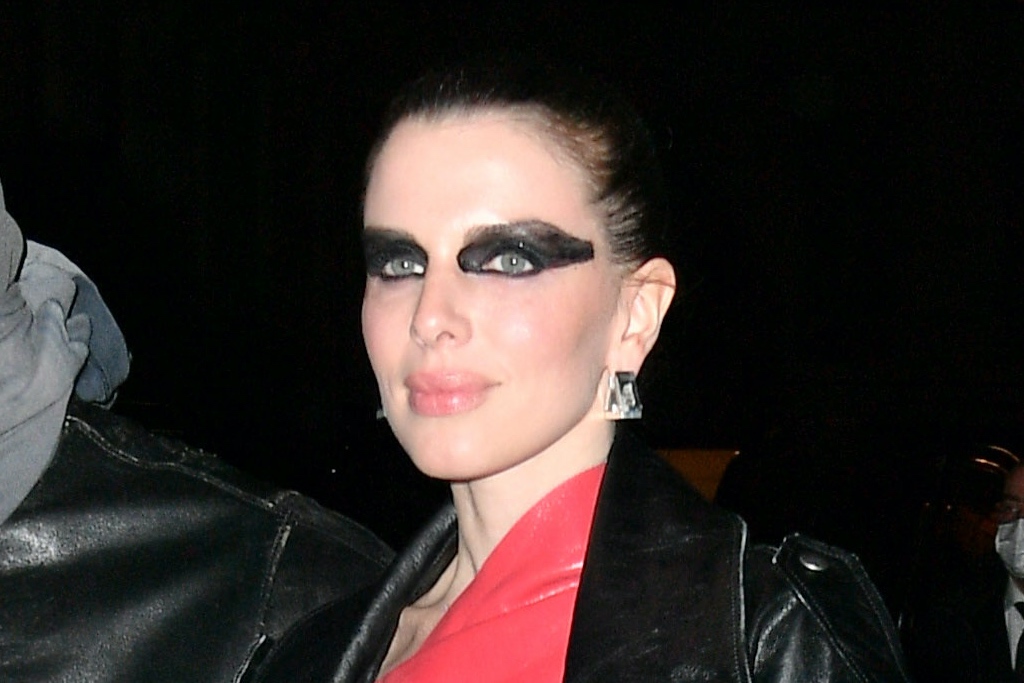 
Julia Fox and Kanye West have continued their matching couples’ style from day into night. After a memorable public outing at Kenzo’s Fall 2022 show, where they twinned in denim outfits, the duo took Paris by storm again—this time, in all leather.

Following Rick Owens’ “glamsleazy” Fall 2022 menswear show last week, Fox stepped out for dinner with West in a red leather dress by the American designer. The one-shoulder number featured a gray lining and asymmetric hem, which stretched to her thighs. Fox’s look centered on the dress, framed by a long black leather trench coat and silver pyramid-shaped earrings.

Similarly to their outfits this morning, West continued the narrative with a coordinating outfit: a black leather jacket and pants over a black hoodie and wrapped cloth face covering. His go-to shoes of late, vintage knee-high Red Wing boots, were also part of this look.

One noticeable detail, however, was Fox’s choice in footwear— they appeared to be the same Balenciaga style worn years ago by West’s ex-wife, Kim Kardashian. Stretching past her thighs to extend into the dress, the “Uncut Gems” actress wore a pair of mirrored thigh-high boots.

The 2016 Balenciaga style, which features pointed toes and stiletto heels, was also worn by the daughter of West and Kardashian, North West, upon release. The then-$1,550 boots also feature a silver metallic reflective texture, guaranteed to make a statement with any ensemble. The new pair streamlined Fox’s dress while maintaining a leather-on-leather texture storyline.

After Fox underwent a widely publicized makeover engineered by West this month, it’s almost fateful that the pair reappeared on his new girlfriend — especially as sourcing archival pieces is a popular styling move for celebrities in recent months.

Thigh-high boots, similarly to the recent “pantaboots” trend, are a popular way to streamline an outfit and maintain full coverage during colder months. The style has remained a constant for brands like Vetements, Saint Laurent and Proenza Schouler.

“Pantaboots,” the pair’s edgier cousin, have emerged in recent weeks by combining pants and boots at houses like Richard Quinn, Balenciaga and Emilio Pucci. Interestingly enough, it currently appears that Fox and Kardashian are simultaneously making the styles their go-to pairs for everyday wear.

Fox has worn a variety of sleek dresses and catsuits on past red carpets, hailing from Dior, Alexander Wang and Jean Paul Gaultier. The “No Sudden Moves” actress’ formal footwear has also included pointed-toe pumps by Christian Louboutin, Giuseppe Zanotti and Manolo Blahnik. After undergoing a recent makeover by West, the star has primarily been seen in pointed-toe Diesel and Balenciaga boots, paired with edgy ensemble by both brands—as well as independent labels like Miaou.

Click through the gallery to see more of Fox’s best style moments.