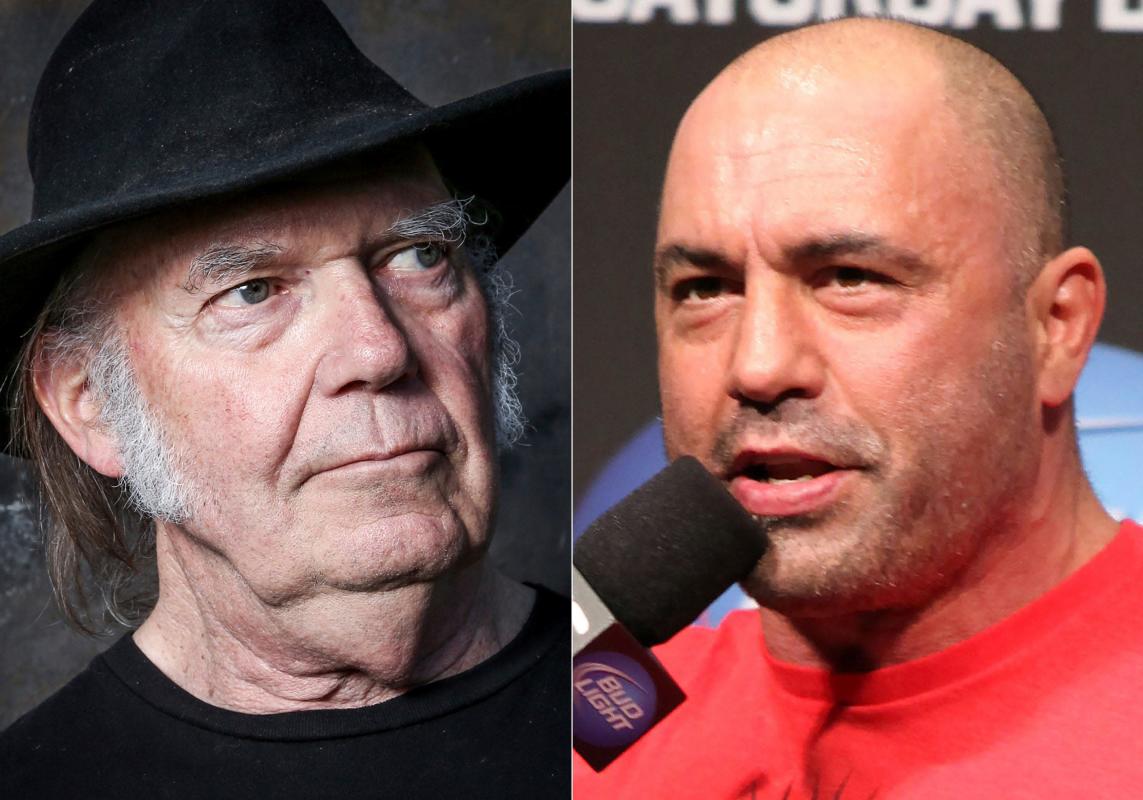 
Jon Stewart is among the celebrities, musicians and writers weighing in over stars’ decisions to leave Spotify in reaction to vaccine misinformation on Joe Rogan’s podcast.

Rock singer Neil Young started the movement Jan. 24 when in an open letter to his management and record company, he said wanted his classic collection of songs to be pulled from the music streamer due to the spread of COVID-19 vaccine misinformation on the platform, and specifically called out Rogan, Spotify’s popular podcast host.

Two days after Young’s letter was published, Spotify agreed to remove the Grammy-winning singer’s catalog from its content library. Joni Mitchell and David Crosby were among musicians that soon followed suit.

Rogan responded to the growing list of artists speaking out against his podcast in a video on Instagram Jan. 30 saying he was “very sorry they feel that way.”

“These podcasts are strange because they are just conversations,” he said. “I want to thank Spotify for being so supportive during this time and I’m very sorry that this is happening to them and they’re taking so much heat from it.”

Many famous faces have shown solidarity with Young, asking Spotify to remove their content. Others are offering their thoughts on the debate. Here are some of their responses.

Political commentator and comedian Stewart called the controversy between Rogan and the music artists an “overreaction” in a Feb. 4 episode of his podcast “The Problem with Jon Stewart.”

Stewart added that there should be more of an emphasis on having a discussion with others, rather than withdrawing from the conversation altogether.

Stewart also placed blame on social media algorithms, which he says leads people to misinformation. “Misinformation will always be out there, but if the algorithm drives people further and further down the rabbit hole, the … algorithm is the amplifier and the catalyst of extremism,” he said.

Young’s open letter, originally published Jan. 24, has since been taken down, but kicked off the Spotify exodus and gave the streaming service an ultimatum: “They can have (Joe) Rogan or Young. Not both.”

“I am doing this because Spotify is spreading fake information about vaccines – potentially causing death to those who believe the disinformation being spread by them,” he wrote.

“We regret Neil’s decision to remove his music from Spotify, but hope to welcome him back soon,” a Spotify spokesperson said in a statement to USA TODAY.

Neil Young and Spotify: Singer wants Spotify to pull his music because of Joe Rogan’s vaccine misinformation on platform

The acclaimed singer-songwriter said on her website that she will be removing her entire catalog of music from the streaming platform.

“Irresponsible people are spreading lies that are costing people their lives,” Mitchell wrote. “I stand in solidarity with Neil Young and the global scientific and medical communities on this issue.”

More: Is Eminem a shoo-in for the Rock & Roll Hall of Fame this year? History suggests yes

Nils Lofgren, who played on Young’s latest release “Barn” as a member of Crazy Horse and is also a member of Bruce Springsteen’s E Street Band, posted a note on Neil Young Archives website announcing that “we’ve now gotten the last 27 years of my music off Spotify.”

“We are reaching out to the labels that own my earlier music to have it removed as well,” his message said. “We sincerely hope they honor our wishes, as Neil’s labels have done, his. We will do everything possible towards that end and keep you posted.”

After speaking out individually, musicians David Crosby, Stephen Stills and Graham Nash have come together to join in on the Spotify exodus. Young’s former band members, who played with him in the folk rock outfit Crosby, Stills, Nash & Young, asked for their music to be removed from the platform.

“We support Neil and we agree with him that there is dangerous disinformation being aired on Spotify’s Joe Rogan podcast,” they said in a statement to USA TODAY. “While we always value alternate points of view, knowingly spreading disinformation during this global pandemic has deadly consequences. Until real action is taken to show that a concern for humanity must be balanced with commerce, we don’t want our music – or the music we made together – to be on the same platform.”

R&B singer India Arie was also inspired by Young’s bold stand. In an Instagram post, India Arie said she is removing her music and podcast from Spotify because of her dissatisfaction with Rogan.

Clips of Rogan using racial slurs on his show began to circulate on social media amid the Spotify controversy.

“Neil Young opened a door that I MUST walk through,” she wrote. “I believe in freedom of speech. However, I find Joe Rogan problematic for reasons OTHER than his Covid interviews,” she wrote. “For me it’s also his language around race. What I am talking about is respect — who gets it and who doesn’t.”

Rogan released a video sending his “deepest apologies” Saturday, calling his use of the racist slur “regretful” and “shameful.”

“I know that to most people there’s no context where a white person is ever allowed to say that word, never mind publicly on a podcast and I agree with that now. I haven’t said it in years,” Rogan said in the Instagram video. “It’s not my word to use, I’m well aware of that now.”

He added: “There’s nothing I could do to take that back. I wish I could. Obviously, that’s not possible.”

In addition to the racist language Rogan used on previous podcasts, Arie mentioned a pay disparity between musicians and podcasters like Rogan as another reason she is removing her music.

“Artist give their LIVES making music that streams for a 28th of a penny. Yes 28th of a penny. And Joe Rogan is paid millions? THIS IS AN ABUSE. thank you @neilyoung for your activist spirit,” she wrote.

Getting straight to the point, New York Times best-selling author Roxane Gay said in a tweet that she has taken down her podcast from Spotify.

“It won’t move any sort of needle but I removed my podcast from Spotify,” Gay wrote. “That’s all there really is to say about that. Onward.”

She later expanded on her reasoning in an op-ed published in The New York Times on Feb. 3 adding that it was a “difficult decision” because of the large audience Spotify presents.

“The platforms allowing this misinformation to flourish and intensify consistently abdicate their responsibility to curate effectively,” Gay wrote. “I am not trying to impede anyone’s freedom to speak. Joe Rogan and others like him can continue to proudly encourage misinformation and bigotry to vast audiences. They will be well rewarded for their efforts. The platforms sharing these rewards can continue to look the other way … But today at least, I won’t.”

Author Brené Brown announced she would not release any further podcasts on Spotify until she learned more about the organization’s misinformation policy. Following a few meetings with the streaming platform, Brown said she is in the “process of learning how the policy will be applied” and hopes to resume her podcasts soon.

“As a creator on Spotify, my ask has been very straightforward since the beginning: I’d like Spotify to have a transparent misinformation policy (made available to the public) that balances addressing the complex misinformation issues we face today while respecting free speech,” Brown wrote on her official website. “And to be meaningful, this policy must be applied across the platform without exception.”

She added: “Personally, I would never want to silence debate about vaccine safety and efficacy because the lack of critical discussion actually increases vaccine hesitancy. However, rigorous debate that benefits the public does not include the dissemination of misinformation.”

Music news: Bastille singer says Riz Ahmed’s cameo on album ‘feels like you were both in bed and in orbit’

Even members of the royal family are getting in on the debate. Prince Harry and wife Meghan Markle, whose audio company Archewell Audio has partnered with Spotify to “produce programming that uplifts and entertains audiences around the world,” are voicing their concerns about the continued spread of misinformation on Spotify.

“Hundreds of millions of people are affected by the serious harms of rampant mis- and disinformation every day,” a spokesperson for the Archewell Foundation told The Guardian. “Last April, our co-founders (the Duke and Duchess of Sussex) began expressing concerns to our partners at Spotify about the all-too-real consequences of Covid-19 misinformation on its platform. We have continued to express our concerns to Spotify to ensure changes to its platform are made to help address this public health crisis.

“We look to Spotify to meet this moment and are committed to continuing our work together as it does.”