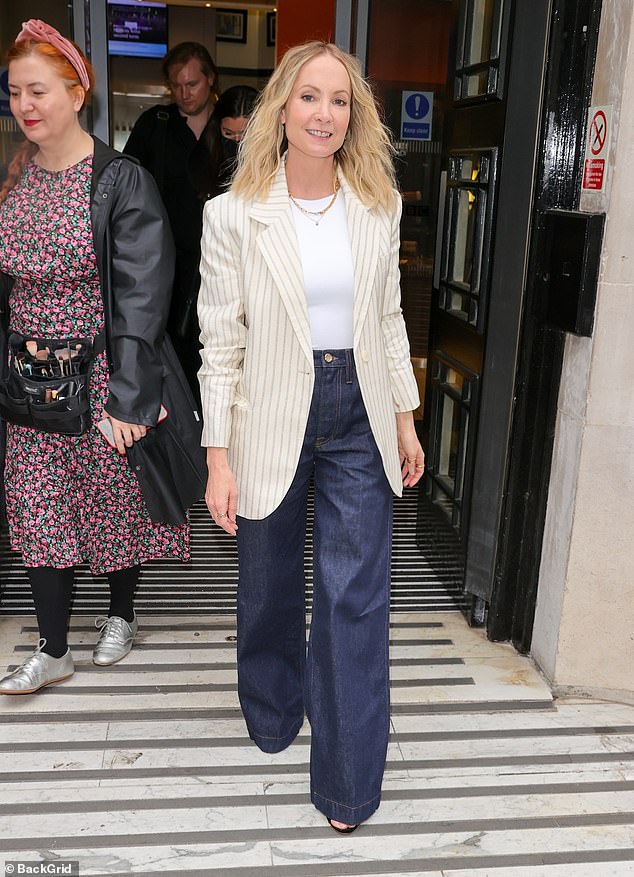 
Joanne Froggatt nailed casual chic on Monday, when she arrived at The Zoe Ball Breakfast Show, ahead of the premiere of Downton Abbey: A New Era.

The actress, 41, who plays Anna Bates in the drama series, looked effortlessly stylish in a cream pinstripe blazer layered over a white T-shirt and wide leg jeans.

She accessorised with several gold necklaces and styled her blonde tresses in loose waves.

She was joined by her Downton Abbey co-star Jim Carter – who plays Mr Carson -looking dapper in a navy blue blazer.

Downton Abbey: A New Era, sees the beloved Crawley family head to the French Riviera to uncover a mystery at a villa bestowed to the Dowager Countess of Grantham.

Meanwhile back in England an ambitious director also ruffles feathers as he plans to make a film at Downton.

The principal cast of the first film, including Hugh Bonneville, Michelle Dockery and Maggie Smith are to return, as well as new characters played by Hugh Dancy, Laura Haddock, Nathalie Baye, Dominic West and Jonathan Zaccaï.

On trend: The actress, 41, looked effortlessly stylish in a cream pinstripe blazer layered over a white T-shirt and wide leg jeans

Speaking to Zoe about her character’s role in the film, Joanne said: ‘Anna stays at the house and is in her absolute element.

‘Her and Daisy especially are so excited about the film crew coming to Downton and they love the actors. They’re just sort of overwhelmed with excitement.

‘So it’s really nice to see that side of Anna after all that she’s been through over the years.’

On her return to Downton, she shared: ‘It is so lovely to be back, I mean we’ve worked together on an off for the last 12 years, so we’ve shared so much of each other’s lives and this amazing experience of being in Downton together. 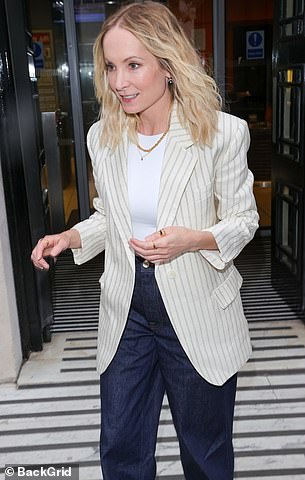 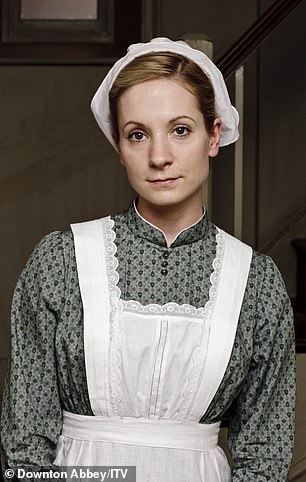 Excited: Speaking to Zoe about her character Anna Bates’ role in the film, Joanne said: ‘Anna stays at the house and is in her absolute element’

‘So it’s wonderful to be able to pop back and do a movie and catch up with each other and hang out with your friends again.’

‘It’s very rare in TV and films that you get to come back together like this, it happens in theatre, you form companies and those bonds are never broken. I feel as though the same has happened here. You know I’m going round doing garden work in various of the younger actors’ gardens.’

The duo also revealed that their elaborate period costumes can be very uncomfortable, but that neither of them care very much. 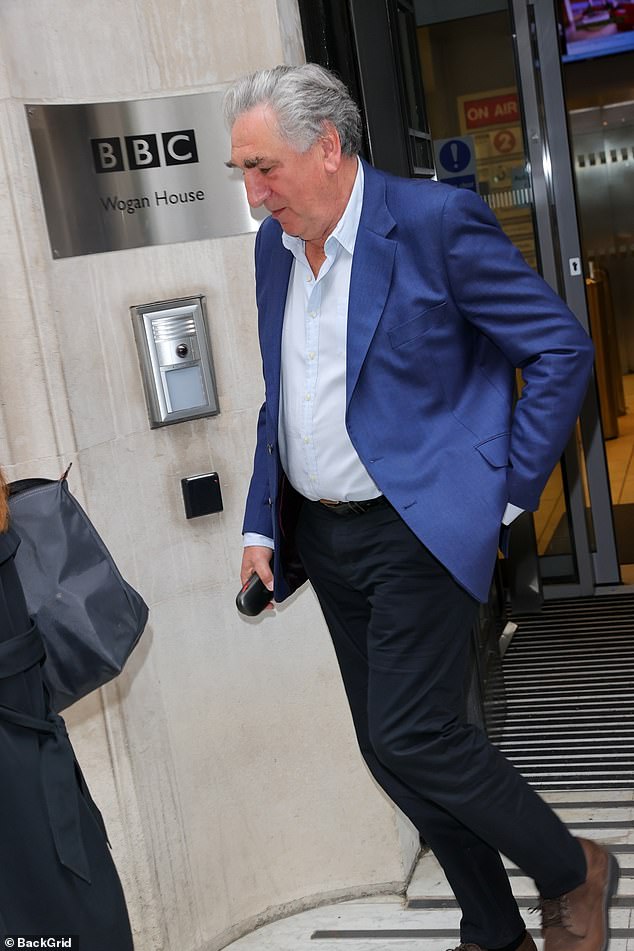 Co-star: She was joined by her Downton Abbey co-star Jim Carter, who looked dapper in a navy blue blazer, ahead of the premiere of Downton Abbey: A New Era on Monday night 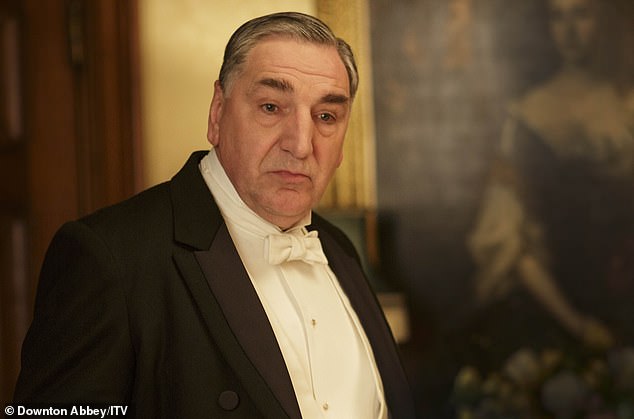 Joanne explained: ‘You don’t mind because it totally changes your posture and looks right and it makes you feel completely different as well, so its much easier to get into character.’

Jim revealed that they have a historical advisor that instructs the actors on how to sit and stand accurately.

He recalled: ‘One time they had to reshoot a bit that Hugh Bonneville as Robert Crawley because he had his hand in his pocket.

‘So for the second season Hugh has his pockets sewn up so he couldn’t possibly be tempted to do something historically incorrect.’

Joanne also divulged that the actors were not allowed to tan while filming the series.

Meanwhile Jim admitted that his famously bushy eyebrows have made it very easy for him to be recognised in public.

He said: ‘I thought with a mask I’d be safe, but the eyebrows just give me away everywhere I go.

‘The first time I knew that Downton was a hit we were doing the publicity bit in New York and someone said “I know those eyebrows!”

He joking added: ‘I’m going to shave them off.’

Downton Abbey: A New Era will be released in the UK on Friday, April 29, and in the US on Friday, May 20. 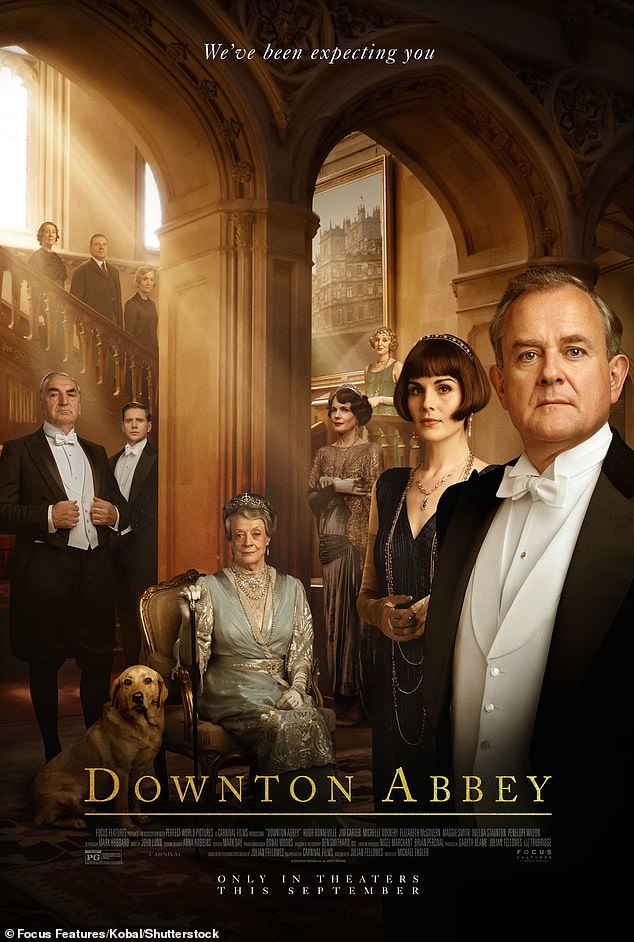 Coming soon: Downton Abbey: A New Era will be released in the UK on Friday, April 29, and in the US on Friday, May 20