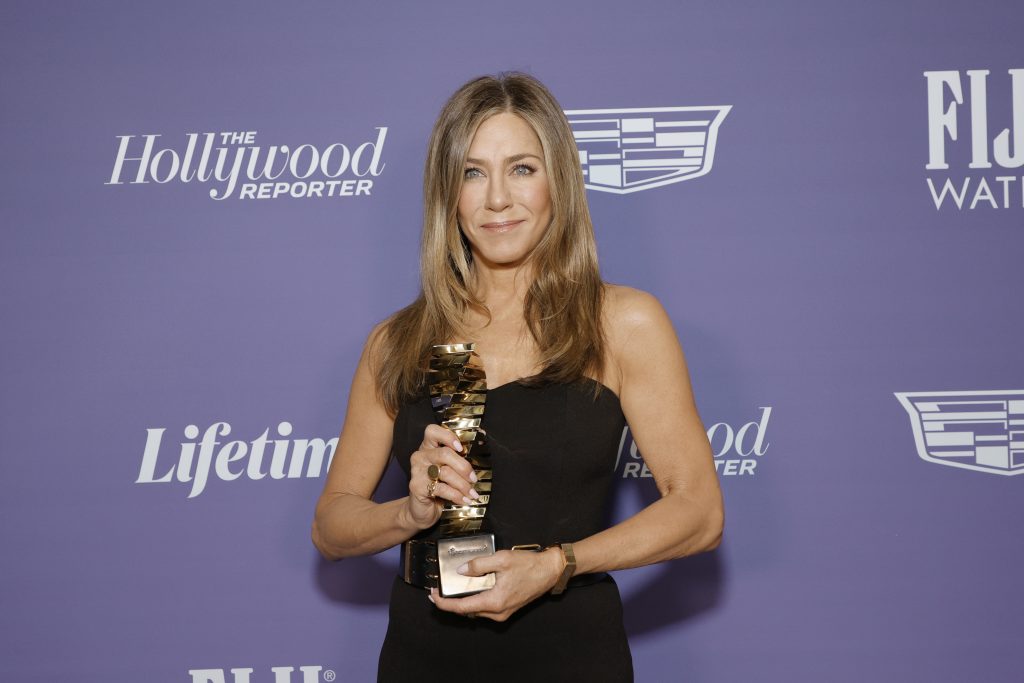 The “Friends” star hit the red carpet in a strapless black jumpsuit. The one-piece garment featured a curved neckline and wide-leg silhouette, creating a streamlined effect. The outfit was given a contemporary twist with a black leather belt that featured gold details. Aniston also kept her accessories similarly classic, pairing the jumpsuit with a gold bracelet and rings.

Though Aniston’s shoes weren’t visible, it’s likely the “Cake” actress wore a pair of strappy heeled sandals in a neutral hue. The styles have been a staple of the actress’ versatile wardrobe for years, hailing from brands like Jimmy Choo, Christian Louboutin and Saint Laurent. Aniston is renowned for her “everywoman” style that includes neutral separates, classic denim and sleek dressed from brands like Proenza Schouler, Vince and Prada. Her shoes are similarly re-wearable, including ankle boots, wedges and oxfords from brands like Clergerie, Chloe and Armani.

At the Lifetime-hosted event, Aniston was presented with her award by her “Morning Show” co-star Steve Carrell. The “We’re The Millers” actress was given her trophy from her contributions to entertainment and philanthropy with organizations like St. Jude’s, Stand Up to Cancer and Feeding America.

“I got into this business mostly because I wanted to make people laugh…but somewhere along the way, my motivation for being an actor, performer, producer and storyteller deepened because I deepened as a person, and the idea of making some kind of contribution got sparked in me,” Aniston said in her acceptance speech. “I’ve realized that what we get to do as storytellers can be emotionally healing for people. I think stories also help us shine a light on cultural illnesses, like sexual harassment and racial discrimination and gender bias in the workplace. Stories can also give us a much-needed laugh after we do all that heavy lifting, so I’m glad I could be a vitamin of sorts for people out there from time to time.”

The Hollywood Reporter’s Women In Entertainment gala honors women who have impacted the entertainment industry and their accomplishments. The occasion also coincides with the publication of the magazine’s Power 100 Women in Entertainment list, as seen in its most recent December issue—which Aniston also covered. Selma Blair was also awarded the Equity in Entertainment Award at this year’s event.

See more of Jennifer Aniston’s style through the years.