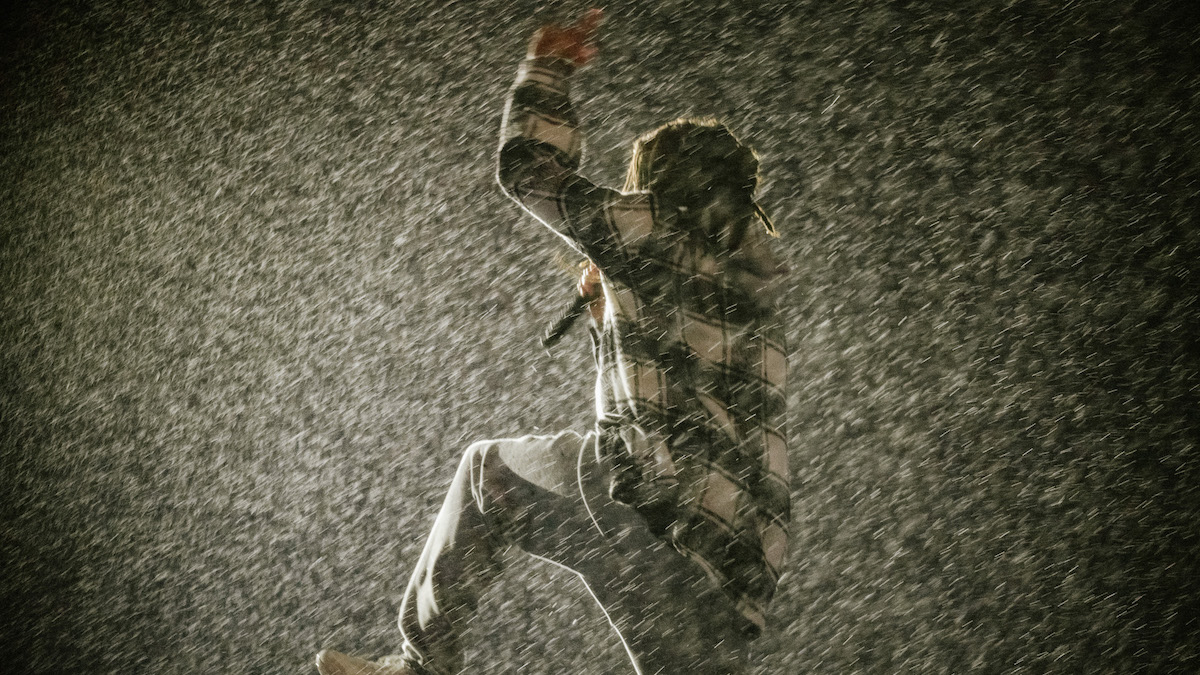 If the Day 1 theme of Rolling Loud New York 2021 was hometown rappers reigning supreme, the driving force on Friday (October 29th) was Mother Nature. Beginning as a crisp, overcast autumn day with winds strong enough to tip over garbage cans, it started drizzling around 7:30 p.m. before giving way to a full-blown rainstorm shortly after J. Cole took the main stage at 8:45.

The Dreamville founder was unfazed by the weather, giving an all-time performance that those in attendance will never forget. Meanwhile, City Girls and Ski Mask the Slump God carried stage presences that demanded reciprocal energy from the crowd, Wale showed the breadth of his catalog after an unplanned set time switch, and Bas gave a sneak peek of his boss’ headlining set while playing his most popular cuts to a loyal crowd.

Check out some of the most memorable moments from Day 2 below.

Kaash Paige Was Grateful to Be Here

Kaash Paige kicked off an early set on the main stage by performing hazy R&B tracks like “Love Songs” and “London.” Emanating a chill demeanor in her cozy winter jacket, the Dallas native gave off positive energy and reassured fans there would always be good things coming in the future. So when Paige switched gears and jumped into the crowd for the guitar-tinged “Lost Ones,” it caught the audience off guard. They were quick to follow directions, however, and opened up the pit to unexpectedly “rage.”

Bas Brought Out An Unexpected Guest

For Dreamville signee Bas, Rolling Loud was especially close to home. “I grew up eight minutes from this bitch,” said the Queens native about Citi Field before launching into favorites like “Night Job” and “Boca Raton.” The packed set was full of highlights, whether it was performing crowd-pleasing Revenge of the Dreamers III cuts like “Costa Rica” and “Down Bad” or previewing his future appearance during J. Cole’s headlining set with “The Jackie.” Unquestionably, the most memorable moment was when an audience member deftly filled in for J. Cole’s part on “Lit” completely off the top of his head. Bas was thoroughly impressed by the performance, praising his surprise collaborator for not freezing up like a “deer in fucking headlights.”

Before the worldwide pandemic, Ski Mask the Slump God was still mourning the death of his friends and close collaborators XXXTentacion and Juice WRLD. As a result, his performance felt like a cathartic release for the reemerging rapper. There were moshpits throughout the crowd, and the Florida rapper pulled off one of his signature front flips into the audience, joking he would Cash App them $100 for catching him. After performing his Juice WRLD collab “Nuketown” midway through the set, it turned into an extended tribute to X, during which fans remembered the charismatic rapper with songs like “Look at Me!” and “Sad?” Fully appreciating the significance of their shared mourning, Ski Mask thanked his followers for being the reason why he’s still here.

Wale Made the Wait Well Worth It

Fans who packed the second stage to see Wale at 5:30 p.m. were left confused when Rick Ross showed up instead. Apparently, Wale was late and his label boss swapped set times with him to avoid either one of them getting cut off. The wait was worth it, as the DC rapper showed off his range by running through songs for the ladies (“On Chill” and “My PYT”) before going “Down South” with his tribute to the Houston classic “Still Tippin’” and rooting for Black excellence with “Sue Me.” Wale closed it out in celebratory fashion by bringing out Queens hero Q-Tip to transition from “Poke It Out” into “Vivrant Thing,” and got the crowd hype by performing his “No Hands” verse.

After a few years keeping City Girls alive with JT in jail, a visible weight has been lifted from Yung Miami with her musical partner back by her side. Braving 50 degree temperatures with matching mid-riff baring tops and booty shorts, the duo didn’t wear much to keep warm save for tiny down jackets. Thanks to their steamy dancing with plenty of twerking and fiery raps, it’s likely the two barely felt the cold. Despite a fully invested audience shouting back every line, the group called out the crowd for not matching the intensity of their hometown fans at Rolling Loud Miami. As unfair as that might’ve been, the criticism wasn’t taken lightly. Although City Girls’ attempt to bring fans on stage for “Twerkulator” was thwarted by security, there was no shortage of volunteers.

Mother Nature Was No Match for J. Cole

A light drizzle began just an hour before J. Cole’s headlining set, but the Fayetteville rapper remained unphased, starting off without a hitch. With a lit-up gigantic basketball hoop in the background, Cole burst onto the stage while performing “95. south,” the emphatic opening track from his latest album, The Off-Season. What followed was a legendary set during which he refused to let the rain hold him back. Exuding boundless energy while high-stepping across the stage for each song, Cole brought out Dreamville signees Lute, J.I.D., and Bas to have their moments in the spotlight.

Once the skies fully opened up, Cole played favorites from his discography like “No Role Modelz” and pulled out recent hit collaborations like “The London” and “a lot,” holding the rapt attention of loyalists who braved the downpour. “We’re going to remember this shit forever,” Cole declared, before admitting that he was worried about fans leaving before his set had even begun. “I appreciate y’all for that.”