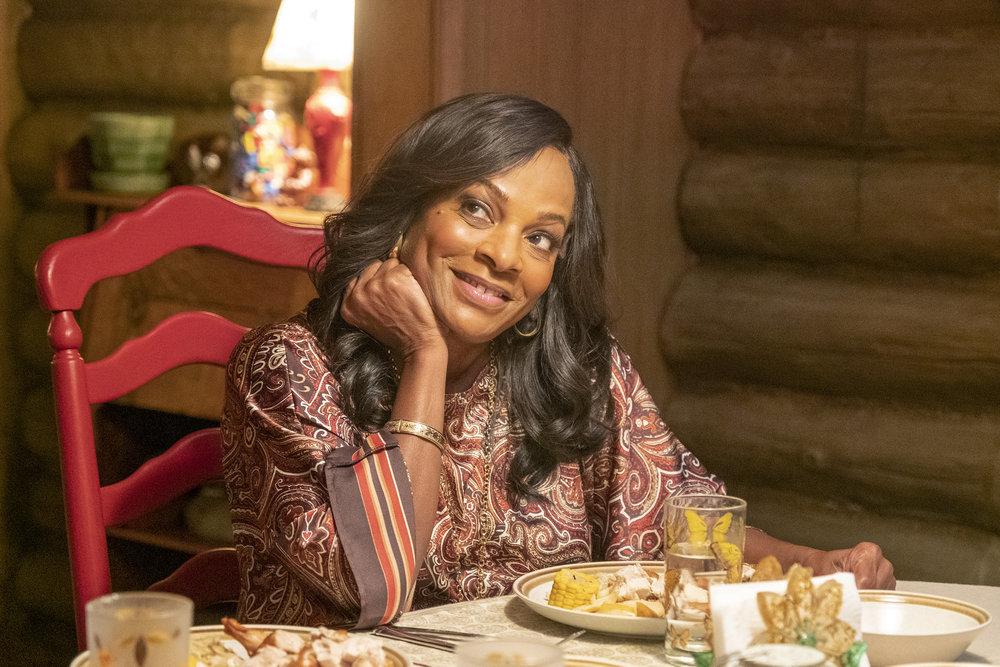 
SPOILER ALERT: The story includes details about the Feb. 1 episode of NBC’s This Is Us, titled “Heart and Soul”.

Love was in the air during the last This is Us episode before Valentine’s Day as the NBC family drama goes on hiatus for the Winter Olympics.

Nicky, who is overseeing the construction of the new house Kevin is building by the Pearson family cabin, is excited — and nervous — as he hosts his new love Edie for her first overnight stay.

Kevin invites Cassidy to the cabin, and the two share a few sweet moments while washing dishes after Randall proclaims her as the come-from-behind winner in the Kevin Pearson sweepstakes “by a hundredth of a second.”  Madison and Eli from book club are practically inseparable, and he spends so much time at her house that he gives Kevin his number in case of emergency.

We witness the start of Rebecca’s romance with Miguel. Several years after Jack’s death, he convinces her to join him for a speed dating session. The two have a great sit-down in-between meetups with strangers and even plot to leave together when Matt Dixon sits across from Rebecca. He was such a minor character that the show included a refresher at the top of tonight’s episode. As is the case with most things This Is Us, it turned out that the single PTA dad from two seasons ago who asked Rebecca out a couple of months after Jack’s passing was not a random, two-line character.

Matt and Rebecca have a nice chat catching up and go to grab a coffee after for Rebecca’s first date post-Jack. Miguel’s feelings for Rebecca are pretty evident as he glances longingly at her and Matt.

Malik and Deja make a big decision, telling Randall and Beth that they are moving in together, with Deja joining Malik in Boston where she plans to get her GED. The news does not go well, with Randall vetoing the move and storming out. Beth is more receptive, telling Randall at the end of the episode that they too wouldn’t have listened if someone tried to keep them apart when they were dating in college.

Pearsons’ dinner with Malik was one of several very emotional scenes in tonight’s episode, along with the gut-wrenching fight between Rebecca and twentysomething Kate that ended in Rebecca slapping her daughter after she had called her a slut for going out on a date with Matt. The two also have an altercation in present time, with Rebecca getting deeply hurt when Kate tells her that she no longer can be alone with the kids because of her progressing Alzheimer’s. They ultimately reconcile in both time periods.

Back in Pensilvania, Cassidy tells Kevin that “there is no reality to a relationship working with us” and asks him to leave her in peace.

In a Q&A with Deadline, the “Heart and Soul” writer Julia Brownell, co-executive producer of This Is Us, discussed all the relationship milestones in tonight’s episode. She addressed whether this is still hope romantically for Kevin and Cassidy, will Matt stick around this time, how will Edie and Nicky and Miguel and Rebecca’s romances progress as well as how will Beth & Randall and Malik & Deja come out of the dramatic dinner face-off. She also spoke about the episode’s emotional scenes and what her favorite moment was. (It will likely surprise you.)

DEADLINE: Rebecca and Miguel. We saw first signs of their budding romance. Will Kate’s strong reaction delay it and how long will it be before Rebecca realizes that Miguel has feelings for her?

JULIA BROWNELL: Yes! We’ve been waiting to tell this story a long time and I was very excited to kick it off in this episode. Interestingly, Kate and Rebecca come to an understanding here and Kate’s reaction doesn’t deter Rebecca from dating… it’s actually another one of our Big Three who will have a stronger reaction to the Rebecca/Miguel pairing. I find it interesting that you asked “Rebecca realizes that Miguel has feelings for her” – because part of the journey may also be Rebecca realizing her own feelings. That’s all coming up very soon, in the next few episodes.

DEADLINE: Matt appeared fleetingly before when Rebecca was still in mourning. He got his date with her in tonight’s episode. Will his appearance on the show will be longer this time? Will Rebecca have a relationship with him (or anyone else) before she gets together with Miguel?

BROWNELL: Yes! Matt will stick around, and we’ll see Rebecca’s first real experience dating post-Jack’s death – and how Kate, Kevin, and Randall react to this. (Not to mention Miguel.) As Rebecca says in this episode, she deserves a chance to be happy. However, we’ll discover that seeing Rebecca with someone else may force Miguel to finally reckon with his feelings for her.

DEADLINE: Kevin and Cassidy. Kevin’s call to Cassidy earlier this season brought her back into the picture as fans continue to root for them. Tonight’s episode was setting up a fairytale ending for the couple until Cassidy gave her heartbreaking speech at the end about the darkness both of them harbor. Is it over for the idea of Kevin and Cassidy as a couple or is there a chance for them to overcome the darkness and find happiness together?

BROWNELL: A lot of people out there are closet Kevin-dy heads! (I made that up. Cassid-in heads? This is a tough one. Still workshopping.) I will say this is not the last you see of Cassidy. She’ll take Kevin up on his offer to help out with the cabin, and continues to be a part of Kevin and Nicky’s lives in a surprising way. But we also wanted to be truthful to the experience of a young war veteran, and that perhaps “easy fairy tale romance with handsome movie star heals everything” might be an oversimplification of this character of Cassidy, who we have all taken great care to create and love so much.

DEADLINE: Deja and Malik. Their announcement split Randall and Beth. Will the decision on how to react create a rift between the Big 3’s most formidable couple?

BROWNELL: I’m happy to say no. Randall and Beth are able to weather this one as a united front, even if Beth doesn’t necessarily completely agree with Randall’s take. That’s what you’re supposed to do in a marriage. (I think. I’ve been told this. By my husband.) However, will it create a rift between Deja and Randall? Absolutely, and that’s coming down the pipeline!

DEADLINE: What can you tease about Deja and Malik’s future? Romeo and Juliet were brought up multiple times, and their love story did not have a happy ending. Will Deja and Malik’s have one?

BROWNELL: I will say that they are very young, and we talk all the time in writers’ rooms about childhood love— the impact that it has, but also how feasible it is as it transitions into adulthood. Why certain relationships last, and others don’t. It’s not going to be a smooth ride for them. They’re not Randall and Beth. They live very different lives and we are going to try to navigate that in a real way.

DEADLINE: Nicky and Edie. Their quick-moving relationship hit a milestone with Edie’s first overnight stay. When will she meet the rest of the Pearsons?

BROWNELL: Aren’t they so charming!? Vanessa Bell Calloway is such a fantastic addition to the Pearson crew. I love how Edie brings out yet another side of Uncle Nicky. Edie will stay in the picture, and she’ll definitely meet the rest of the Pearsons in the next handful of episodes.

DEADLINE: The episode featured a number of emotional scenes, several featuring Rebecca and Kate, both in the present and the past. Which one was the hardest to write, and what was your favorite moment in tonight’s episode?

BROWNELL: The slap was so tricky! We wanted to make sure you didn’t HATE Rebecca for doing it, but also that you understood Kate’s pain and point of view as well. We definitely debated what kind of language Kate should use to get Rebecca to that moment. They’re both hurting. And hopefully we win you back with their present story, where they’re able to have conflict and express it and move on with love.

My favorite moment in the episode is one you might not expect. I loved the dinner scenes, and it was so awesome to see our all-star cast crushing them. But my favorite moment is the moment when Matt kisses Rebecca on the cheek in the car, and she thanks him, and she gets out as he drives away, and Mandy smiles. It’s so full of hope and pathos – I think Mandy’s acting is extraordinary, and my heart breaks for her in the moment, because she is clawing her way to these tiny moments of happiness, and I’m rooting for her so hard.