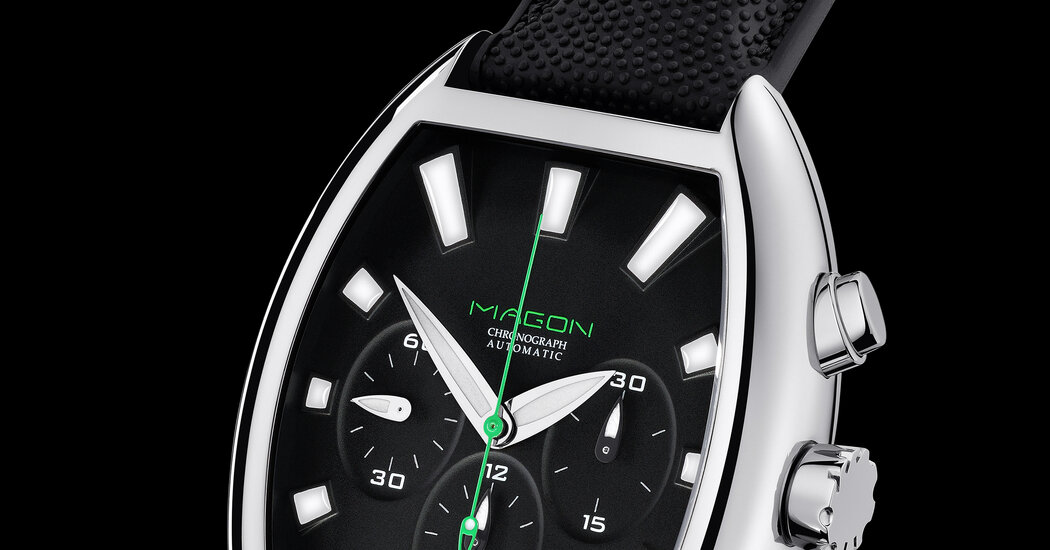 
DUBLIN — Stephen McGonigle likes to give his watches Gaelic names. He had intended to call his new, rugby-inspired timepieces Láidreacht, or strength. “Then I realized no one could pronounce it,” he said with a laugh, “so I went for Fórsa, or force.”

Mr. McGonigle, 47, has had a lifelong passion for rugby. He played the game as a youth, but confesses he was not professional material. Instead, he trained at the Irish-Swiss Institute of Horology in Dublin, then went on to work for major watch houses in Switzerland. He now runs McGonigle Watches, an Irish company he and his brother John founded in 2006 that specializes in high-end, handmade mechanical watches.

Last month Stephen McGonigle introduced Magon Watches, his first independent venture, which uses his childhood nickname. It features two handmade mechanical chronograph models: the Fórsa Titanium (9,800 euros, or $11,215), which has a polished case that looks like white gold, and the Fórsa Dubh (€11,800). The case for the Dubh, which means black, is sandblasted and plated in a black diamond-like carbon coating, giving it what Mr. McGonigle called a “mean” look and making it “very strong and scratch resistant.”

The Fórsa watches were in development for three years. The cases are tonneau, or barrel, shape to mimic the curves of a rugby ball, Mr. McGonigle said, and measure 40 millimeters by 33.5 millimeters.

“Ninety-five percent of watches are round,” he continued. “They start life as a tube of metal in a sausage shape that’s chopped into shape. The tonneau takes much longer, there are many more materials needed and it’s harder to waterproof.” The Fórsa watches are waterproof to 100 meters, or 330 feet.

The Swiss-made straps — in green or black rubber — are hand-stitched. One resembles traditional alligator skin, another is dimpled to match the texture of a rugby ball. Though the watches are aimed at “anyone,” Mr. McGonigle said, he hopes they will appeal to rugby players and fans: “These are big watches that would suit a lot of those lads.”

Robbie Henshaw, an Ireland Rugby International center and Magon Watches brand ambassador, has been wearing a prototype Fórsa Titanium for the last year. He said he wears his watch everywhere, including on tour earlier this year with the British and Irish Lions rugby team in South Africa, where it attracted attention from other players.

“It’s a beautiful timepiece,” Mr. Henshaw said, “very comfortable to wear and it really resonates with me because of the rugby theme.”

Mr. McGonigle also collaborated with the Irish jeweler Nigel O’Reilly to produce a one-off gem-set model called the Fórsa Solas, or light. The dial is studded with 718 green diamonds, which took 120 hours to set. “I’m surprised Nigel agreed to do it,” Mr. McGonigle said, “because titanium is a murderous metal to work with.”

Mr. O’Reilly said he spent three weeks setting the gems, twice as long as it would have taken with gold. “In hindsight, it was fun,” he said, “but it was stressful at the time.” The jeweler explained that engraving titanium takes three times as much force as engraving gold — and “increased force means there’s more chance it can go wrong.”

It didn’t, though, and Mr. O’Reilly said he was pleased with the result. “Stephen and I got on well; we’re not gaudy. On paper, 718 green diamonds — ah, that’s too much,” he said. “But these stones are dark, they have a nice edge and they curve beautifully around the dial.”