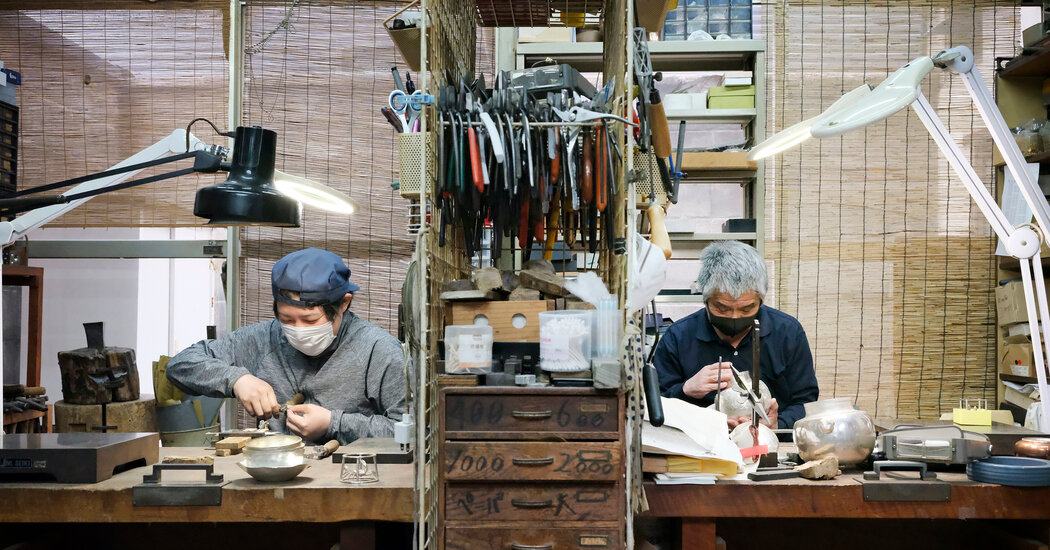 
KYOTO, Japan — Yoshinaga Nakamura’s family has specialized in kazari-sho, or metal art, for seven generations. But the items have changed with the times over the last 200 years, and now, as Japan looks forward to welcoming tourists again, he is preparing for the future.

“We used to make decorative parts — metal carvings of various designs and patterns, such as floral and geometric — on the hilt and the sword case for katana,” said Mr. Nakamura, 64, referring to the long, single-edged swords that samurai carried on their hips. “The decorations were a way to express yourself, like fashion.”

But when katana were banned during the 1870s as part of the government’s crackdown on the samurai class, “we shifted the direction of the business,” he said. “We kept making those same decorative ornaments, but for other purposes,” adding them to items like vases, kiseru tobacco pipes, utensils for tea and incense ceremonies, and obi-dome, the decorative jewels worn on kimono sashes.

Today, Mr. Nakamura creates art pieces like teapots, such as a silver one that conveys a bird’s-eye view of snow-capped Mount Fuji and took around two months to complete, presenting them in solo exhibitions under his artist name, Eishin Chikueido IV. And with the assistance of a handful of artisans, he also creates small silver jewelry pieces — including traditional Japanese hair ornaments, called kanzashi, and charms in animal shapes like bunnies and mice, similar to the miniature sculptures called netsuke — which are sold online and in his boutique.

But Mr. Nakamura noted that his father, Eishin Chikueido III (who died in 2007 at 84), was the first member of the family to make the decorative hairpins. “The generations before us didn’t make hair ornaments,” Mr. Nakamura said. “Back then, craftsmen had high pride and didn’t want to make something for women. But my father and I were not like that.”

This type of long hairpin was traditionally worn with a kimono, while modern versions, like those sold at the shop, might be used to accessorize a bun. The kanzashi, along with the delicate silver earrings, brooches and rings sold in the shop, were particularly popular with the millions of tourists who came to Kyoto from around the world to see attractions like Kinkakuji, a Zen temple covered in gold leaf.

The country’s tourism plummeted during the pandemic. According to Yoshihisa Inada, a research director at the Asia Pacific Institute of Research in Osaka, just 245,862 visitors entered the country in 2021, a decline of more than 99 percent since 2019, when it welcomed almost 32 million.

“Kyoto has been affected tremendously, and the biggest impact is on tourism,” said Shoei Murayama, a former Kyoto City councilman and visiting professor at Taisho University in Tokyo. “This includes hotels, inns and other accommodation facilities, as well as souvenir shops. Before the inbound boom of tourism, they functioned in an environment that did not rely on foreign tourists, but with the increase in foreign tourists, they found themselves unable to do without them.”

In Kyoto alone, Mr. Inada said, foreign visitors spent 279.4 billion yen in 2019. And its traditional artisans, like Mr. Nakamura, have been facing a difficult time without that income.

“It has a huge impact,” Mr. Nakamura said. “We used to have a lot of foreign customers, especially from China,” a country he loves and used to visit regularly. Although he has been receiving online custom orders throughout the pandemic, he said the shipping issues and costly customs and duties fees sometimes made it impossible to fulfill the orders.

The Kyoto city government does not support its craftspeople directly, but since the pandemic began, it has encouraged local businesses to buy local crafts by covering 90 percent of the costs, Mr. Inada said.

“Some restaurants purchased our products,” Mr. Nakamura said, “and used them so customers can see and touch the craftworks of Kyoto.”

He added: “Luckily, we have a lot of customers in Kyoto, and there is demand for high-end crafts. And thanks to them, we can survive. We can eat and make a living.” But this does not make up for the lack of international visitors, and he is impatient to see them return — “from the bottom of my heart,” he said.

In addition to his work, Mr. Nakamura has been teaching at the Traditional Arts Super College of Kyoto; repairing museum artifacts, shrines and temples, including a recent project to make the ornamental covers for nails used in one of the Daitokuji Temple’s smaller temples; and has introduced a YouTube channel, where he demonstrates his silver work techniques. (Mr. Nakamura has a flair for transmitting his knowledge — he quizzed me about the weight of different metals and fruit shapes hidden in one of his teapots, making metal art sound fun and accessible.)

At Home and Work

We met at a 133-year-old machiya, a traditional wooden townhouse, in the central Nakagyo ward of Kyoto. It is Mr. Nakamura’s shop and metalwork atelier, as well as his home, where he was born and raised.

“Until 2004, we had only commissioned work, so we had a studio area where customers came by to place orders,” he said. But Mr. Nakamura and his father wanted students to have an opportunity to learn how to make crafts by hand. “My father used to teach as well,” he explained, “and the students often said that once they got a job, they were sent to places that mainly used machines to make things. We were concerned about that. So that’s how the shop started.”

The boutique is at the front of the building, with a navy noren, a short curtain inscribed with the name of the shop, Kazariya Ryo, hanging across the entryway. Once inside, visitors are expected to take off their shoes before stepping up to an area with tatami mats where the jewelry is sold. Through another doorway, also hung with a noren, is a long, dark hallway that leads to the back of the house and two spacious metal workshops for Mr. Nakamura and his staff. In total, 10 people are employed at the business, called Chikueido, after the family’s artist name.

Japanese royalty conferred the name on Mr. Nakamura’s great-great-grandfather, Eishin Chikueido I, in the 1800s in recognition of his artistic achievements, and it has been passed down as each Nakamura completed training in metalwork. Mr. Nakamura began using it in 2009.

The house, built in 1889, has retained the charms — and some of the inconveniences — of earlier times. The kitchen, in the long hall, is equipped with a pump to draw water from the house’s well; a kamado, a traditional Japanese cook stove; and a mushikamado to steam rice. (“I don’t use it, I always go out to eat,” Mr. Nakamura said.)

He recently invited me and some other guests to gather at a low table in an adjacent small tatami room, hung with paintings and photographs of his ancestors. It opened to a leafy garden featuring a stone pathway, moss-covered ground and a fountain that survived Kyoto’s destruction by fire during a rebellion in 1864.

Mr. Nakamura described how he started studying with his father at the age of 15. “I learned techniques from my father, but I also educated myself,” he said. They established the Chikueido company in 1990.

Naoko Yokota studied metalwork with Mr. Nakamura’s father and now works at Chikueido, helping to create jewelry. (“I’ve been working with metals for 23 years,” she said.) During our visit, Ms. Yokota demonstrated how she used wire saws of different sizes to cut silver into shapes like lotus roots, round and dotted with holes, for earrings.

Making things by hand is the top priority for Mr. Nakamura. “It’s much easier to create machines or man-made instruments to make things faster and in larger quantities,” he said. “But I want to focus on using hands and create the necessity of using hands to make crafts. I’m not interested in making new machines.”

For his own art pieces, he never uses casting, but he does for some jewelry items to keep prices accessible.

Silver is his preferred metal, even though he also works with others, such as gold and copper. “Silver is the most suitable metal for handmade crafts,” he said, noting that sheets of silver are malleable, but when they are hammered, they harden — “just like sand does when it’s packed together,” he said.

Mr. Nakamura said that in addition to technique, it is important for artisans to learn history and to think about why people need items, rather than why they want them.

“Maybe I overwhelm customers when they walk in the shop,” he said with a smile.” But I keep doing this because it’s meaningful.”