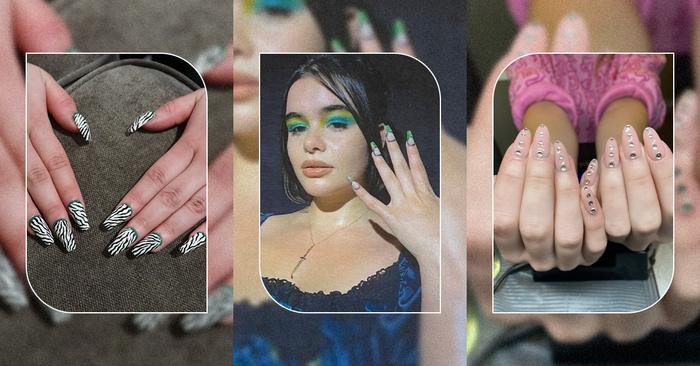 
If you’ve spent most of your time binge-watching season two of Euphoria over the past few weeks (ahem, like me), it’s impossible not to notice the small details that really make the show. I’m talking particularly about the show’s makeup looks, which have boasted both intricate eye-shadow work and simple (yet sharp) winged liner. But I have to draw attention to another subtle gem that’s really been catching my eye this season: each character’s nail designs, of course.

Season two has been especially loaded with stand-out nail art that makes characters like Maddy and Cassie look even more snatched than before (if that’s even possible). And don’t think I forgot about Fez’s insanely badass grandma, who sported the gold nails of my dreams. Anyway, before I go on too long of a tangent about each look, I have to take a second and credit the incredible Natalie Minerva, the show’s nail artist. I couldn’t help but pick her brain about the season’s hottest nails. “I think my favorite nails were Maddy’s caged nails from episode five and Kat’s zebra nails from episode seven,” Minerva shares. “I love how visually stimulating both of them are, and I am obsessed with making patterns. Cassie’s floral ombré nails from episode seven are really fun, too!”

So what does an artist of this caliber always carry in her kit, you ask? “I am typically a gel artist, and I’m absolutely obsessed with Riccagel. It’s a top-tier art gel from Japan. However, when I do use nail polish, I prefer Butter London or Deborah Lippman because they’re both easy to apply and hyperpigmented.” I’m sure you’re also dying to know how you can re-create these iconic looks for yourself, so I took the liberty of asking Minerva to break down the steps for us, too. Keep reading below for her step-by-step guide to fabulous, full-on Euphoria nails.