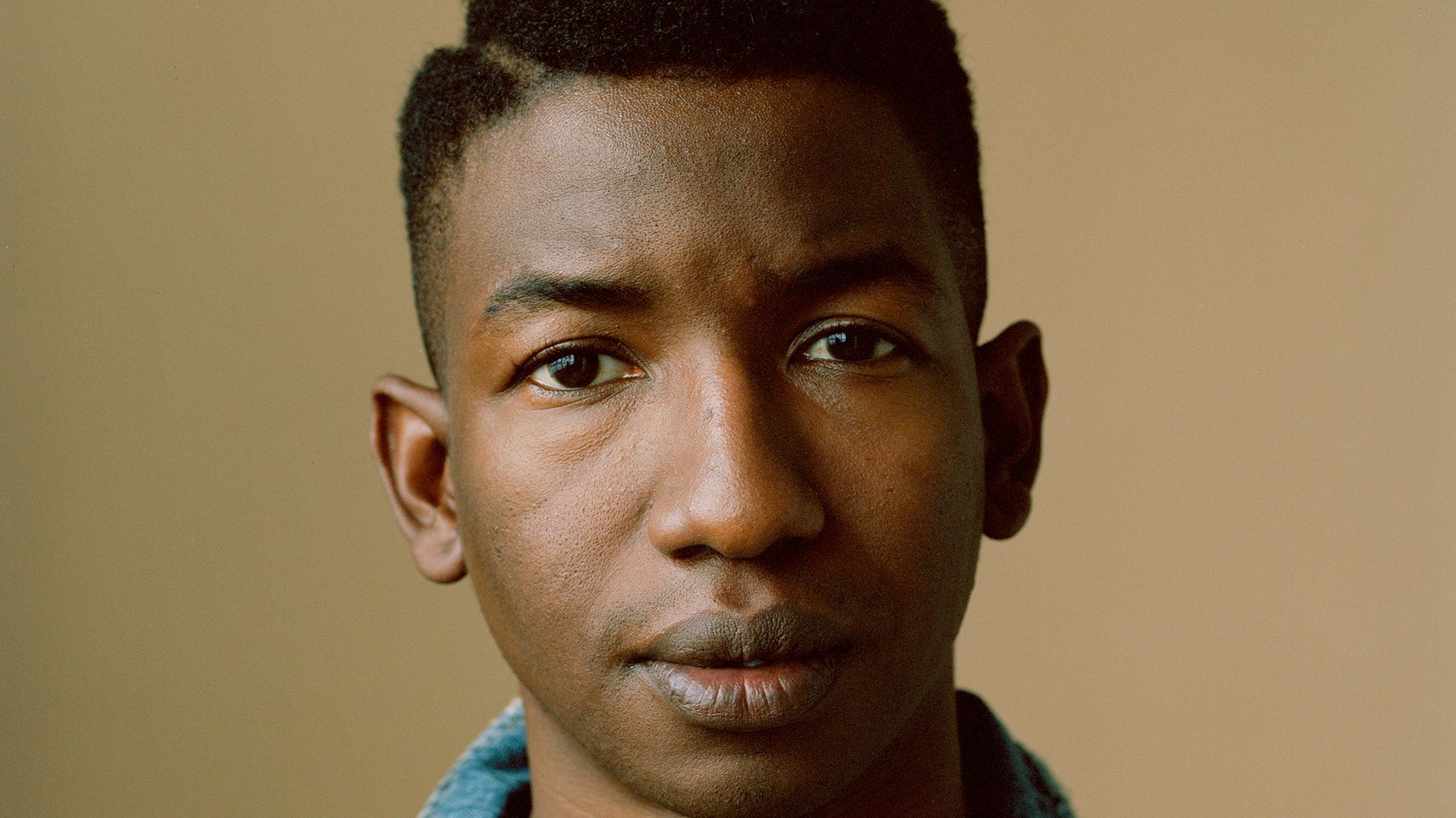 Just hours after waking up to the news of Sidney Poitier’s death, Mamoudou Athie, an actor now strolling down the road that the Black cinema legend once paved, hops on Zoom with a pensive smile. “Hey, how’s it going?” he asks, and actually wants an honest answer.

Now in year three of the pandemic and the world still in distress, there could be myriad things to complain about that are usually all shielded behind the ubiquitous response of “good.” But on this day, Athie, like so many of the characters he’s played — from the memory of a young husband on “Sorry for Your Loss” to an aspiring sommelier in “Uncorked” and his latest, a tormented archivist on Netflix’s thriller series “Archive 81” — has a lot on his mind.

Though the Mauritanian-born, Maryland-raised actor and Yale theater grad is grateful for the many opportunities he’s earned, including a whopping 20 credits in just seven years, today he solemnly contemplates the deceased icon on whose shoulders he stands.

“God rest his soul,” Athie, 33, begins. “Sidney Poitier exemplifies that spirit of dignity and grace.” Athie can’t help but also consider his peers who still struggle to bust doors open. “I think about all the actors who graduated even just a couple years before me who didn’t get even close to some of the opportunities that I’ve had.”

And Poitier had to make a way out of no way. “I was just thinking about what opportunities that have been availed to me that were completely closed doors to people in Sidney’s time,” Athie continues. “And I feel like I owe a great debt to all of them.”

Throughout our conversation, Athie often has moments of deep reflection that also help him delve further into a role or ground himself as a person living in the world today. Some characters, like Matt Greer on “Sorry for Your Loss” who only appears in flashbacks after taking his own life, requires that Athie research topics like mental illness, about which he admits he knew very little.

“Oh, man — I thought a lot about the people in my life who experience depression, and some of the things that I would say to try to help,” he recalls. “It made me a little ashamed that I didn’t do that research prior to, if this person that I was so close with was suffering from this condition.”

But for archivist Dan Turner in “Archive 81,” who spends hours in a dark room alone staring directly into, ultimately, his own past while restoring increasingly ominous footage recorded inside an apartment building in 1994, Athie was immediately able to access the character.

“We were in the middle of this pandemic,” Athie explains, referring to the six-month shoot last year that took place in the middle of lockdown and in the wake of a racial reckoning. “We just had the last couple of years — that summer, the election … I was raw.”

It was the immense solitude, though, in both his and Dan’s lives that made “Archive 81” a more seamless undertaking for the actor. “Just being alone all that time, and being alone on set,” Athie says. “I mean, there’s people around and we have people to talk to. But when it came down to it, it felt very isolated and alone. A lot of [the emotional labor] took care of itself.”

Still, what the audience learns is that Dan’s journey, and subsequently Athie’s performance, goes frighteningly far beyond the resonant experience of seclusion. At the start of the story, it’s established that Dan previously had a breakdown after his family was burned to death in a house fire.

So, while he’s soon convinced that his late father (Charlie Hudson III), a psychologist, appears in the videos that reveal a cult and the grad student (Dina Shihabi) documenting the events, his past mental instability causes even his best friend (Matt McGorry) to question his truth. Even more unsettlingly, Dan starts to doubt it himself.

“He’s like, ‘Well, I have to be reasonable,’” Athie says of his character. “‘What I’m seeing very well might not be the case.’ Then, finally, [he] gets that confirmation. That confirmation is almost a period of joy for him because it’s like, ‘I’m not crazy. And I’m getting this opportunity.’”

As the actor says that last part, his smile widens on camera because he knows that this is critical to getting to the heart of a character in even pitch-dark narratives like “Archive 81” and busting it wide open — the phase of the acting process that most excites him. It’s when Dan realizes that he can restore something that someone has lost and hopefully reclaim a life. “[He’s] like, ‘Here’s a chance to make something right,’” he adds. “It’s the best.”

It’s this display of almost reticent emotion in even his portrayals of the most internally conflicted characters that captivated “Archive 81” showrunner Rebecca Sonnenshine, who was already familiar with his talent after watching him on “Sorry For Your Loss.”

“The character of Dan really needs someone who has a vulnerable side,” she said during a recent phone conversation. “But there’s like an anger coiled inside of them.” For Sonnenshine, Athie has this quality. “He has such an expressive face. There’s a stillness about him, and I just really felt captivated by watching him.”

What it really comes down to is the empathy he has — for the fictional characters he embodies as well as the world around him. Sometimes he’s affected so deeply that he does a self check-in after wrapping a production. After “Archive 81,” Athie took some time to peel away from the role.

“You don’t work for a while,” he says plainly. “You just sit at home. I was like, ‘What’s going to be good for me is chilling out.’ I had never felt it to that degree in my life before. I think the isolation, and COVID, and everything had a lot to do with it, obviously. But I just needed time to get right.”

Then again, he has another moment of clarity during our chat when he realizes that even when he feels overwhelmed by his creative process, he remembers that he’s doing a lot better than many others. “I’m like, man, people were having the worst year of their lives,” he says. “I was doing OK. You know what I mean? I was fine.”

Throwing himself into the process of building his performance is what fuels him, anyway. Athie understood that Matt in “Sorry for Your Loss” was an intense empath who, as the actor puts it, took in everything around him and tried to meet it with kindness, which “can be exhausting.” Still, Athie read the newspaper and absorbed each article as Matt would to the point where he could barely get out of bed.

But Athie prefers the artistic process over watching the final product on-screen, which he rarely does anymore. “I’m not so interested,” he says. “In the beginning [of my career], I was like, ‘I need to do this so I can learn. I need to know if what I think I’m doing is what I was doing.’ And now I’m a lot more secure in myself.”

When it comes to his diligent work ethic, Athie credits his father, who was a diplomat for the Mauritanian government before he got the family asylum in the States amid a dangerous political situation in the African country when the actor was a baby. Well, him and “student loans,” Athie jokingly adds.

“My dad would always tell me — I didn’t listen to him and then it became really apparent to me when I was focusing on becoming an actor and trying to be a good actor — ‘Mamoudou, every job that you do, you have to treat it like it’s the one you love,’” he remembers fondly.

With all this emphasis on fine-tuning a performance, though, you might wonder whether he’s a perfectionist. “I wouldn’t say a perfectionist, but I’ve just learned the difference between cutting corners and having no regrets,” he expounds. “I don’t want to have any more regrets, because I’ve had regrets. Like, ‘If I had just stayed up a little … ’”

Thinking back, this method is also what got him into school and remains his approach as an artist because, as he puts it, “I’d fallen in love with working on it.” It also seems to be what keeps him so humble. “This is all imagination,” he says, adding perspective. “It’s not like I’m digging a ditch. It’s not that kind of hard, laborious work. It’s more like, how far can you go into the psyche of this person and the circumstances of this person? Because that all takes care of itself.”