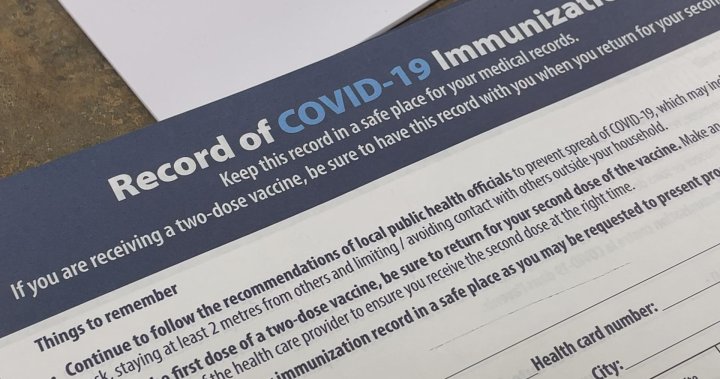 Horizon Health Network says people are approaching employees to falsify COVID-19 vaccination records and now there are calls for the province to move quickly on bringing in a secure records system.

“It is clearly breaking the law if you were to do that and I surmise that nobody at Horizon has falsified any records,” said Peter Ford, who owns Ford’s Apothecary in Moncton.

Horizon Health’s VP community, Jean Daigle, released a statement on Tuesday saying, “Horizon was made aware of a handful of incidents where members of the public were requesting our health care staff to — in essence — commit fraud on their behalf. We need the public to be fully aware this will not be tolerated and any such incidents will be reported.”

According to RCMP, falsifying vaccination records is a criminal offence and anyone who tries to use or traffics in forged documents could face criminal charges.

“Any person creating a false vaccination record or medical exemption is undermining efforts to keep people safe,” said Coreen Enos, a representative for the N.B. Department of Justice and Public Safety.

Falsifying a vaccination record is a “serious issue,” said Enos, and any instances should be reported to the police or [email protected]

“Under the NB Public Health Act it is an offence for a person to make a false statement, either orally or in writing, with respect to proof of vaccination against COVID-19, medical exemption or travel,” said Enos.

Under the mandatory order, a peace officer may issue a fine in the amount of $480 and, should the offence be brought to court, a judge may issue a fine to an amount not exceeding $20,400 plus fees, said Enos.

Moncton pharmacist Monique Duclos said some of her pharmacist colleagues have been asked to commit fraud, but would not reveal where the incidents took place.

“They were having a clinic at their location and these two girls came in and had an appointment and they came in and simply put their papers and asked the nurse to sign their papers but they didn’t want the shots,” said Duclos.

The president of the New Brunswick Medical Society, Dr. Jeff Steeves, said he’s “somewhat shocked that people would go to that length.”

Steeves said he is not aware of any physicians who have been asked to forge documents but said some doctors are getting a few patient requests for vaccination exemptions and when those requests are denied because the patients do not meet the limited criteria for exemption, the reaction is sometimes quite negative.

“They have not had a lot but everyone said we have had a few and that the range of the reaction went from just being angry with the physician to all the way to verbally abusive,” said Steeves.

Ford says the province needs to move quickly on implementing a records system that is more verifiable so that those being tasked to check for proof of vaccination, such as restaurant staff, know how to spot a fake.

He said the current records that are being used are too easy to forge.

“People can steal a page or a blank record and fill it up themselves. It is just totally bizarre,” he said.

A person submitting false vaccination records could face heavy fines or prosecution under the Criminal Code.