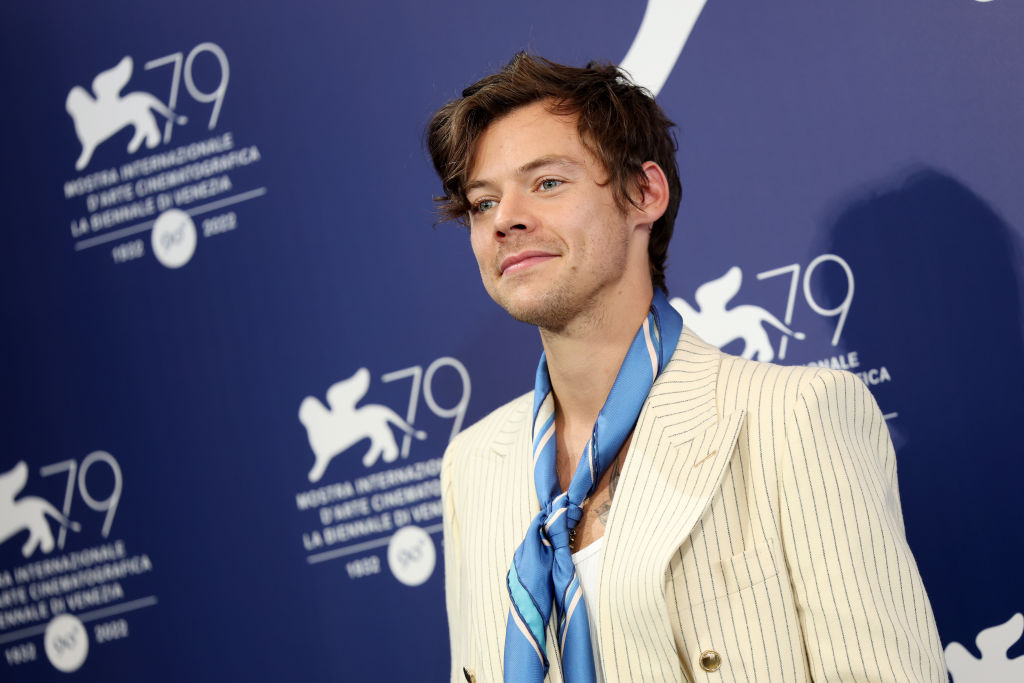 The actor and singer’s look for the film screening was a head-to-toe Gucci ensemble from his Gucci HA HA HA collaboration, which included a washed double-breasted white pin-stripe wool jacket featuring a suit label on the left handle sleeve that said Gucci, dark navy suiting flare pants that had a ‘70s feel, a blue-ivory double face silk ascot, and an ivory rib cotton tank with patch details.

The tank top itself was a bold but subtle choice for contrasting the formality of the jacket with one of the most casual menswear pieces possible.

He paired the outfit with a pair of brown crocodile print moccasins, another popular trend from the ’70s.

When Styles first arrived, he also wore a pair of coordinating brown oversized tortoiseshell sunglasses that helped the brown in the shoes pop. He later removed the sunglasses to take photos for the press.

Harry Lambert, Styles go-to-stylist, styled the film star for the occasion. Lambert has worked with other stars, including Olivia Wilde, Barry Keoghan, and Emma Corrin. He’s been a close collaborator for many of Harry Style’s best-known Gucci looks alongside Gucci creative director Alessandro Michele.

The 79th Venice International Film Festival previews upcoming films, with top Golden Lion awards heralded as predictors for the following Academy Awards. The 2022 ceremony, hosted by Rocio Munoz Morales, will run from August 31—September 10, with top contenders including “Blonde,” “White Noise,” “Bones and All” and “Don’t Worry Darling.” This year’s jury will be chaired by Julianne Moore, who is joined on the panel by Mariano Cohn, Leonardo di Costanzo, Audrey Diwan, Leila Hatami, Kazuo Ishiguro and Rodrigo Sorogoyen.