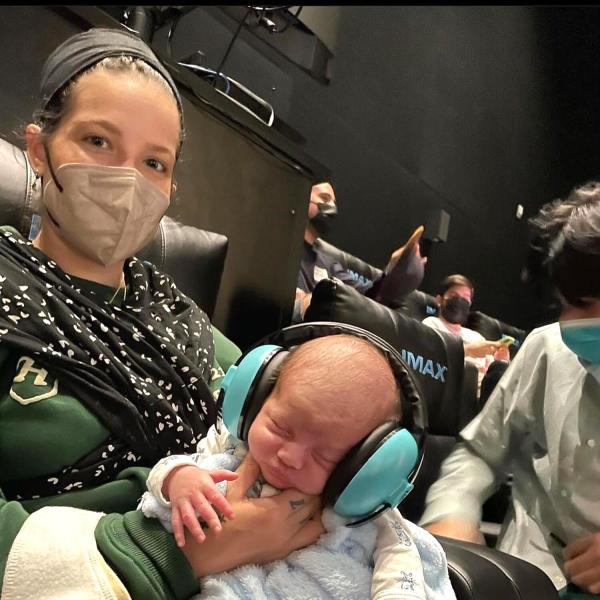 Halsey is looking back at their first year as a mother ahead of 2022.

The singer, 27, posted a series of photos to Instagram Friday from the past year, giving a new glimpse at their pregnancy and their five-month-old baby, Ender, whom they welcomed with boyfriend Alev Aydin in July.

In one photo, Halsey poses in overalls, a red jacket and matching hat and a white face mask while showing off their baby bump. Halsey also included a second photo from their pregnancy in which they recline on a couch outside and raise their hands up while revealing their bare belly.

RELATED: Halsey Had ‘Loads’ of ‘Normal’ Jobs Before Becoming a Singer: ‘I Took License Photos at the DMV’

The handful of sweet photos featured plenty of pictures of Ender. In one snap, Halsey holds their son while he sleeps in their lap wearing protective baby earmuffs.

In another, Ender sleeps with a stuffed rabbit doll. The “Without Me” singer closed out the gallery of photos with an image of Ender being held on a hammock, plus a final photo of the baby being cradled by Aydin.

Halsey also included two solo photos of Aydin in their post. In the first, he sits on the floor beside a box of tools, while in the second, he sleeps in what appears to be a hospital room. Along with the photos of Aydin, Halsey mixed in an image from their friend Maria Margarita Endicott’s wedding.

RELATED: Halsey Says They ‘Don’t Care’ to Receive Grammy Recognition for If I Can’t Have Love, I Want Power

Halsey has been candid about their experience with motherhood since welcoming Ender, their first child, this summer. They opened up about how parenthood has changed them in October, telling a fan on Twitter that welcoming Ender affected them in “so many ways.”

“I feel guilty for working,” Halsey began, adding, “I feel guilty when I’m not working. I’m terrified I’ll always struggle to live up to my own expectations. But I have also experienced love unlike any other and have finally learned how to ask for help and admit when I’m lonely or in need.”

While 2021 marked the year Halsey became a parent, it also brought the release of their latest album, If I Can’t Have Love, I Want Power, which debuted in August. Halsey, who created the album before giving birth to Ender, told Billboard in October that motherhood shifted their perspective on their music career.

“I’m glad we got to make this album when we did because being a mother to my son makes being a musician seem pretty boring,” Halsey said of the album.

They added, “Something really amazing happened when I did have my son, which is the absolute, glorious eradication and death of my ego. Nothing matters when I go home to him. He thinks I’m perfect and great and everything.”