Former The 100 stars Bob Morley and Eliza Taylor are expecting their first child together.

The couple shared the happy news on Instagram as they posted a cute photo of a pair of baby-sized fluffy slippers.

“Our journey to pregnancy was not always smooth sailing but we are elated to announce our little bundle is officially on the way 🥳💕,” wrote 32-year-old Taylor, who is best known for her stint as Janae Timmins in the Aussie soap Neighbours.

Morley, who has appeared on both Neighbours and Home and Away, shared the same sweet photo on his Instagram.

“Gearing up for the greatest roles ever. Big little shoes to fill and we cannot wait!” he wrote.

The happy news comes almost three years after the couple suffered a pregnancy loss in 2019 –the same year they married. The couple had been filming Season 7 of he US TV series The 100 at the time when they lost their baby.

Giving the couple more reason to smile, just last week the co-stars revealed they would reunite on screen in new sci-fi thriller titled I’ll Be Watching.

According to Deadline, Taylor will “play a woman trapped in her isolated new home who becomes caught in a fight for survival,” while Morley will play her tech expert husband. 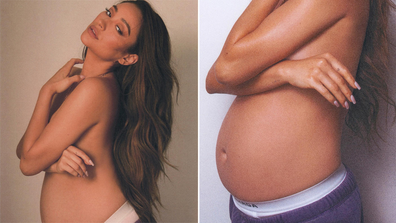