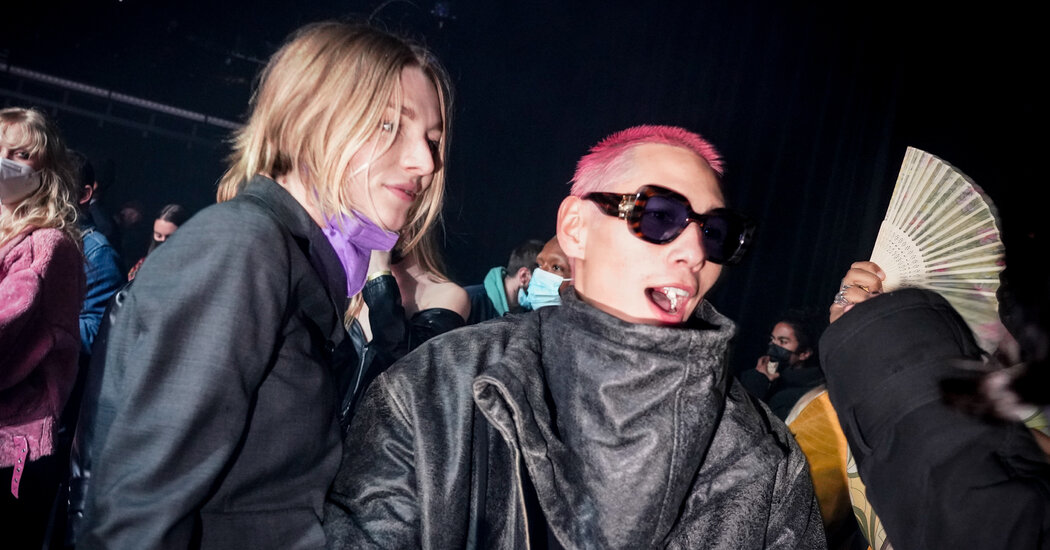 
Is it really New York Fashion Week? Many designers sat this one out and, for a moment, the party calendar looked pretty bleak. Luckily, the invitations began trickling in late last week. Here are some highlights from Friday.

Instead of a fashion show, Rodarte revisited their greatest hits at a weeklong exhibition, “The Art of Rodarte” at Spring Studios. It included illustrations of the crown Natalie Portman wore in the 2010 film, “Black Swan,” and a knit leather dress from their fall 2009 collection, inspired by Boris Karloff’s “Frankenstein.”

Occasion: The Feb. 11 conversation with Kate and Laura Mulleavy, the founders of Rodarte, led by Maude Apatow (star of “Euphoria”; daughter of the Judd Apatow and Leslie Mann); followed by a subdued cocktail party. It was also Kate Mulleavy’s birthday.

The Room: The sixth floor of Spring Studios (site of many fashion shows) was transformed into a “an immersive customer experience” with dresses on mannequins, holograms and video projections. Upstairs, at the cocktails, massive black-and-white balloons read “Happy Birthday Kate.”

Dress: A mix of Zara tops, business suits and a few VIPs in Rodarte. “Sometimes she thinks it’s a permanent loan and it’s not,” said the comedian Jill Kargman, of the Rodarte gown that her 18-year-old daughter, Sadie, on loan from Rodarte. Ms. Kargman added that she owns the black Rodarte top she wore.

The Mood: “I lived in California for a year-and-a-half and the Rodarte Halloween party was one of three fun things that happened,” said Ms. Nef, who wore a black-and-white ruffled Rodarte dress under a vintage fur overcoat (coyote, she thought). How did this party compare? “People are better behaved,” she said.

Is Diesel on the upswing? The Italian brand known for its premium denim opened a flagship store in SoHo in a bid, perhaps, to recapture its 1990s glory days. “Now is the moment,” said Eraldo Poletto, the chief executive of Diesel North America. (Renzo Rosso, who founded Diesel in 1978, did not attend.) “It’s about freedom and the values of America. We want to be back into the future.”

Occasion: The store opening at 122 Spring street, and an after-party to celebrate the latest collection by its creative director, Glenn Martens.

The Room: A minimalist, two-story boutique at the corner of Spring and Greene Streets, lacquered in the brand’s trademark red. The bar in the basement was a mad house.

In Attendance: La La Anthony, the former MTV VJ; the model Alexandra Richards; and various rappers including Flo Milli, Saucy Santana and Maliibu Miitch, who were all outfitted by Diesel. Maliibu Miitch, who wore an open jacket with nothing underneath, liked her leggings. “Because they show my bootee,” she said.

The Mood: “Diesel is definitely back ,” said a man who gave his name as Shiva Wolves. “They’re bringing the excitement back to New York, post pandemic.” Upon further questioning, he revealed that he was visiting from Miami.

Shayne Oliver shook the fashion world when he put his brand, Hood by Air, on hiatus in 2017. Now he’s back. On Feb. 11, the fashion elite made its way to the Shed at the Hudson Yards for a 10:30 p.m. performance that showcased the first looks from his new namesake label.

Occasion: It was the second of a three-night festival at the Shed produced by Mr. Oliver’s Anonymous Club, a studio that spans music, art and fashion.

The Room: The sixth floor theater, which seats 500, was transformed into a black box, with a large scaffolding where models clamored down a metal staircase and Eartheater, an instrumentalist, performed.

In Attendance: Hunter Schafer from “Euphoria,” Evan Mock from “Gossip Girl,” and fans of Mr. Oliver including Bethann Hardison, Antwaun Sargent, Ferdinando Verderi, the artist Rachel Rose and Quil Lemons. There was a good deal of black leather and skin, and everywhere you looked, it seemed like gender and fashion references were being blurred.

The Mood: Disciples of Mr. Oliver’s fashion temple left feeling fulfilled. “It’s a total work of art,” said Mr. Sargent, a director with the Gagosian Gallery. “That’s what is exciting about Shayne coming back. I’m excited for him to take all the space he wants. That’s so radical and that’s what this moment is. It’s kicking down all the doors.”