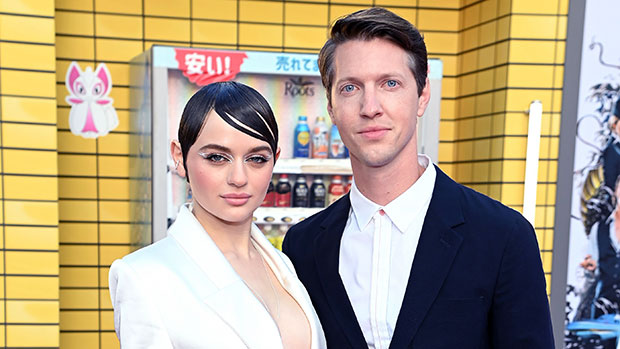 
Joey King has been in front of the camera for years. With her earliest roles in 2006 in The Suite Life of Zack and Cody, Joey’s breakout came in 2010 in one of the title roles for Ramona and Beezus. She achieved a new level of fame, when she starred as Elle Evans in the widely popular Netflix film The Kissing Booth in 2018. She reprised her role in the romcom’s two sequels. Since the streaming film, Joey has moved on to very different roles, including starring in the action flick Bullet Train and the drama series The Act.

While Joey has risen to fame for romcoms, her real love life has gained much public interest. From her romance with her co-star Jacob Elordi to her now-engagement to director Steven Piet, Joey, 23, seems to be thriving in her personal life. Find out everything about the actress’s boyfriends here.

Joey’s first high-profile romance was when she dated her Kissing Booth co-star Jacob Elordi, 25, who starred as Noah Flynn in the show. Joey opened up about her first time rehearsing a kissing scene for the first movie in the series, during a 2018 interview with Seventeen. “I was so nervous. So, Jacob and I were in our director’s office rehearsing the scene,” she said. “I was like, ‘Omg! I just met this guy. I have to make out with this person in an office.’ He was nervous. I was nervous. It all worked out, but it was hilarious.” The pair clearly got over those nerves, and Joey said they started going out after being “best friends.”

While the pair have seemingly scrubbed their Instagrams, the couple did regularly share photos of their romance, per Seventeen. Given how special it is to act alongside your real-life boyfriend, Joey also admitted how glad she was to be able to share the experience with her beau. “It’s exciting for people to know what they saw on screen was real,” she told The New York Times in a 2018 interview.

While the pair were able to bring their relationship to life on the screen, rumors started circulating that the pair had split by the end of 2018. Even though their relationship came to an end, Joey and Jacob still reunited for The Kissing Booth sequels, and Joey opened up about it in a 2020 profile for Cosmopolitan. “No one’s thinking to themselves, That was easy, because it wasn’t,” she said. “Elle Evans needs her Noah Flynn, and whatever that means for my personal life, I’ll do anything to make sure the story of my character who I care about so much is complete.”

George Carlin’s Wives: Everything About His 2 Marriages, Including His 36-Year Marriage To Brenda

After the split from Jacob, there were some rumors that she started dating yet another co-star Taylor Zakhar Perez in August 2020. Taylor shut down the rumors though in an interview with Access Hollywood at the time. “I will say that we are not dating,” he said, and explained that the two were just friends.

Despite the breakup, Joey quickly moved on, when she met director and producer Steven Piet on-set for her 2019 limited series The Act. The pair were first reported to be together in late 2019, by E! News. After some speculation, the couple went public with their romance making it official in 2020. Joey regularly posts photos of the director on her Instagram, and they couldn’t seem more in love!

Joey and Steven decided to take their relationship to the next level in February 2022, when Steven asked the Bullet Train actress to marry him while vacationing in Costa Rica. “The date was 2/2/22 when you asked me to marry you and made me the luckiest lady alive. I love you more than an Instagram caption could ever do justice. Hanging out with you forever sounds like a real dream, so let’s do it,” she wrote in the announcement. While the pair’s wedding plans aren’t known yet, they really seem like a perfect pair!