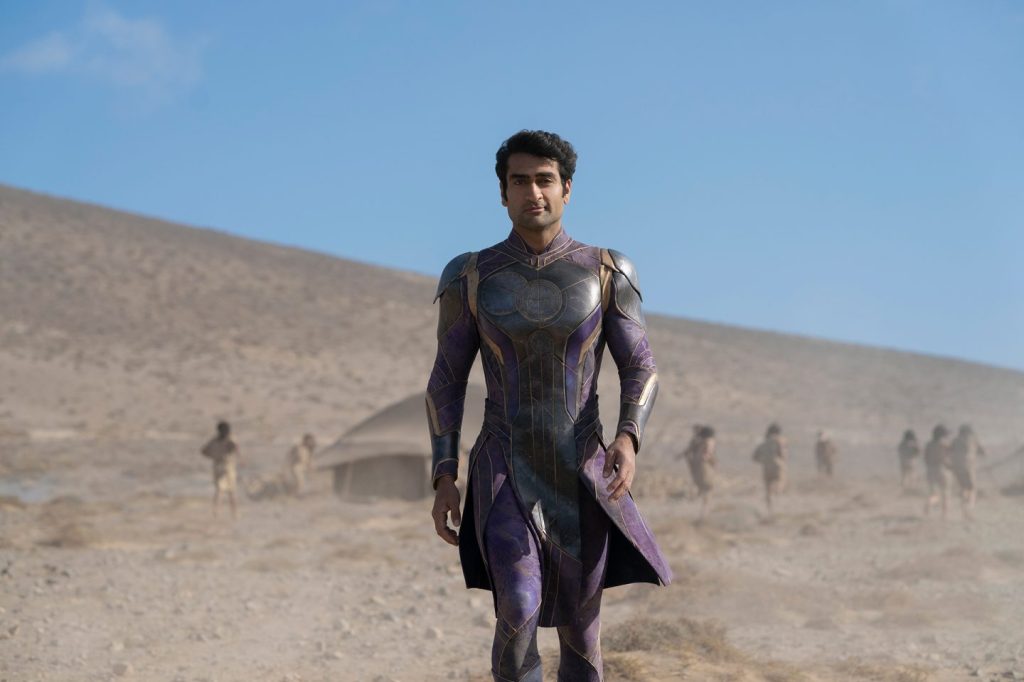 
Refresh for latest… Disney/Marvel’s Eternals has come in ahead of projections with an opening weekend of $90.7M at the international box office, and $161.7M global when paired with domestic. This gives the Chloé Zhao-directed film bragging rights to the second-biggest worldwide opening for a Hollywood title in 2021. The global debut sets Eternals 26% ahead of Shang-Chi And The Legend Of The Ten Rings and 8% ahead of Black Widow in like-for-like markets. Overseas, that translates to 76% above Shang-Chi and 26% above Black Widow.

Whereas China is typically a swing market on a Hollywood movie (and while Eternals is not expected to get a date there), this time around Korea was a key element. The market is just emerging into a “living with Covid” strategy and despite encouraging numbers on Venom: Let There Be Carnage and Dune, had been overall soft of late. Eternals, which had a comparatively low Naver score versus other recent Marvel entries, increased nicely throughout the frame, dropping only 16% from Saturday to Sunday to cume $14.4M.

To be sure, Eternals is a splat score-wise in a lot of areas, and conversation around the film is rough. Still, European markets did not see drop-off throughout the weekend and right now there’s less concern about frontloading than coming into the first days of offshore rollout. This doesn’t mean the tide won’t change.

Meanwhile, it was an interesting weekend in China. MGM/Eon/Universal’s No Time To Die held tight to the No. 1 spot in its sophomore session, now having cumed $49.3M there on its way to a Maoyan-projected $66M. At the same time this session, China head-scratchingly allowed entry for two other Hollywood titles which had been widely available elsewhere. Paramount’s Snake Eyes: GI Joe Origins mustered $1.5M while Sony’s Netflix sell-off Vivo did $547K. China is currently experiencing a Covid resurgence which is affecting 19% of the box office, but Disney’s Jungle Cruise may have a bit more of a berth next weekend, even if it’s releasing in China three and a half months after the rest of the world. At least Dis had enough notice to get stars Dwayne Johnson and Emily Blunt mobilized.

Turning back to James Bond, No Time To Die crossed the $500M mark internationally this weekend with $524.3M from a combined 72 Universal and MGM markets. In the UK, it has now become the No. 5 all-time grosser at $122.1M, overtaking Avengers: Endgame. The full overseas weekend was good for $27.2M and the global total is now at $667.1M; $42.3M is from IMAX to become the second-highest grossing title for the format this year.

Elsewhere, both Sony’s Venom: Let There Be Carnage and Warner Bros/Legendary’s Dune continue to register double digits overseas. Venom 2 came in at $11.4M in 54 offshore markets this weekend. This lifts the international box office to $227.6M and global to $424.6M. Dune added $11.1M from 75 markets to reach $246.5M offshore and $330.4M global.

In other offshore news, it’s nice to see some big numbers out of India (and the diaspora) as both Bollywood’s Akshay Kumar-starrer Sooryavanshi and Tamil movie Annaatthe with septuagenarian Rajinikanth making waves. We are hearing estimates in the $15M-$16M worldwide range for the Diwali holiday titles and will update accordingly.