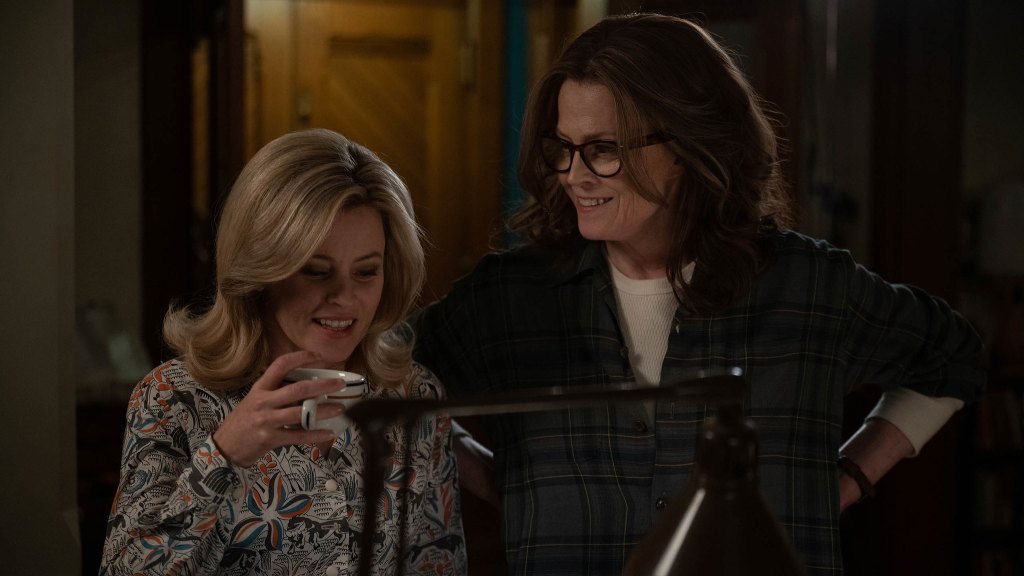 
A suburban housewife falls in with a group of activists in Call Jane, a Sundance Film Festival premiere directed by Phyllis Nagy, the writer of Carol. Elizabeth Banks is a likeable lead in this story inspired by the network of women who arranged safer illegal abortions in 1960s and ’70s Chicago. Written by Hayley Schore and Roshan Sethi, it strikes an upbeat, non-judgmental note while exploring the gender and body politics of the time.

Banks plays Joy, a smart, pregnant mother who helps her lawyer husband Will (Chris Messina) with his work, while assuming the duties of a traditional homemaker. After Joy collapses, the doctor discovers a medical condition that could be life-threatening if her pregnancy continues — but their petition for a “therapeutic termination” is denied by the all-male board. Desperate, Joy sees a flyer saying, “Pregnant? Anxious?… Call Jane.” She’s gradually drawn into the underground “Jane” collective lead by Virginia (Sigourney Weaver), who arranges abortions for those in need. After assisting the doctor, Dean (Cory Michael Smith), Joy gets more involved than she ever imagined, while keeping it a secret from her husband, daughter (Grace Edwards) and best friend (Kate Mara).

There are tense, disturbing moments in Call Jane, such as when Joy enters the medical room for her procedure. She’s terrified, fully conscious and told to keep quiet while Dean wields instruments and explains exactly what he’s going to do with them. But this is not the squirm-inducing trauma of the likes of Mike Leigh’s Vera Drake, or the more graphic awards contender Happening. Once Joy has recovered, we’re shown the procedure several more times, each one accompanied by a more brisk, routine tone that’s either jarring or ground-breaking, depending on your position — possibly both.

Unlike many an abortion drama (which granted, isn’t a huge genre), this doesn’t dwell on either risk or conflicting emotions; it is taken for granted that these women have been helped enormously. The script is careful to point out that they include rape victims, underage girls and poverty-stricken mothers of many, and Gwen (Wunmi Mosaku) petitions for the Black women among them. Those we actually see tend more towards privileged white characters who are easier to play for laughs, such as Sandra (Alison Jaye), an excitable young woman who’s having an affair with a man Virginia labels a “Jackass.”

Rocking a Gloria Steinem look, Weaver is one of the film’s finest assets, thoroughly convincing as world-weary ’60s feminist who can talk women or men into anything (watch out for a strange but ultimately amusing session of strip poker). Meanwhile, the excellent soundtrack has the mood of a hippy love-in, mixing evocative, lesser-known tracks by everyone from Nancy Sinatra to The Velvet Underground, perhaps the most pointed being Malvina Reynolds’ “What’s Goin’ On Down There.”

With abortion rights still under debate in the U.S., and the similarly themed doc The Janes also in Sundance, Call Jane is a relevant as ever, and will doubtless cause controversy in some circles. But it approaches its serious subject with a smile, falling comfortably alongside the likes of On the Basis of Sex and Misbehaviour as a cheerful, accessible feminist drama.