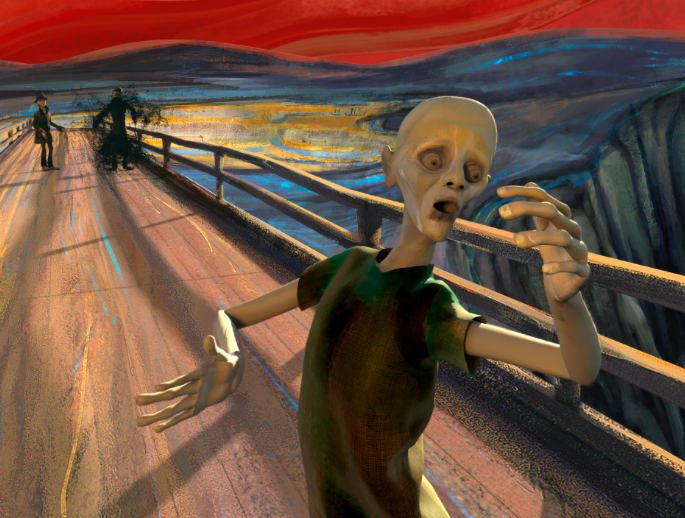 
In this short video, Romanian animator Sebastian Cosor brings together two haunting works from different times and different media: The Scream, by Norwegian Expressionist painter Edvard Munch (1863-1944), and “The Great Gig in the Sky,” by the British rock band Pink Floyd.

Munch painted the first of four versions of The Scream in 1893. He later wrote a poem describing the apocalyptic vision behind it:

I was walking along the road with two Friends
the Sun was setting — the Sky turned a bloody red
And I felt a whiff of Melancholy — I stood
Still, deathly tired — over the blue-black
Fjord and City hung Blood and Tongues of Fire
My Friends walked on — I remained behind
— shivering with anxiety — I felt the Great Scream in Nature

Munch’s horrific Great Scream in Nature is combined in the video with Floyd’s otherworldly “The Great Gig in the Sky,” one of the signature pieces from the band’s 1973 masterpiece, Dark Side of the Moon. The vocals on “The Great Gig” were performed by an unknown young songwriter and session singer named Clare Torry.

Torry had been invited by producer Alan Parsons to come to Abbey Road Studios and improvise over a haunting piano chord progression by Richard Wright, on a track that was tentatively called “The Mortality Sequence.”  The 25-year-old singer was given very little direction from the band. “Clare came into the studio one day,” said bassist Roger Waters in a 2003 Rolling Stone interview, “and we said, ‘There’s no lyrics. It’s about dying — have a bit of a sing on that, girl.’”

Forty-two years later, that “bit of a sing” can still send a shiver down anyone’s spine. For more on the making of “The Great Gig in the Sky,” and Torry’s amazing contribution, see the clip below to hear Torry’s story in her own words.

Would you like to support the mission of Open Culture? Please consider making a donation to our site. It’s hard to rely 100% on ads, and your contributions will help us continue providing the best free cultural and educational materials to learners everywhere.

Also consider following Open Culture on Facebook and Twitter and sharing intelligent media with your friends. Or sign up for our daily email and get a daily dose of Open Culture in your inbox.

30,000 Works of Art by Edvard Munch & Other Artists Put Online by Norway’s National Museum of Art

The Night Frank Zappa Jammed With Pink Floyd … and Captain Beefheart Too (Belgium, 1969)

Three Pink Floyd Songs Played on the Traditional Korean Gayageum: “Comfortably Numb,” “Another Brick in the Wall” & “Great Gig in the Sky”