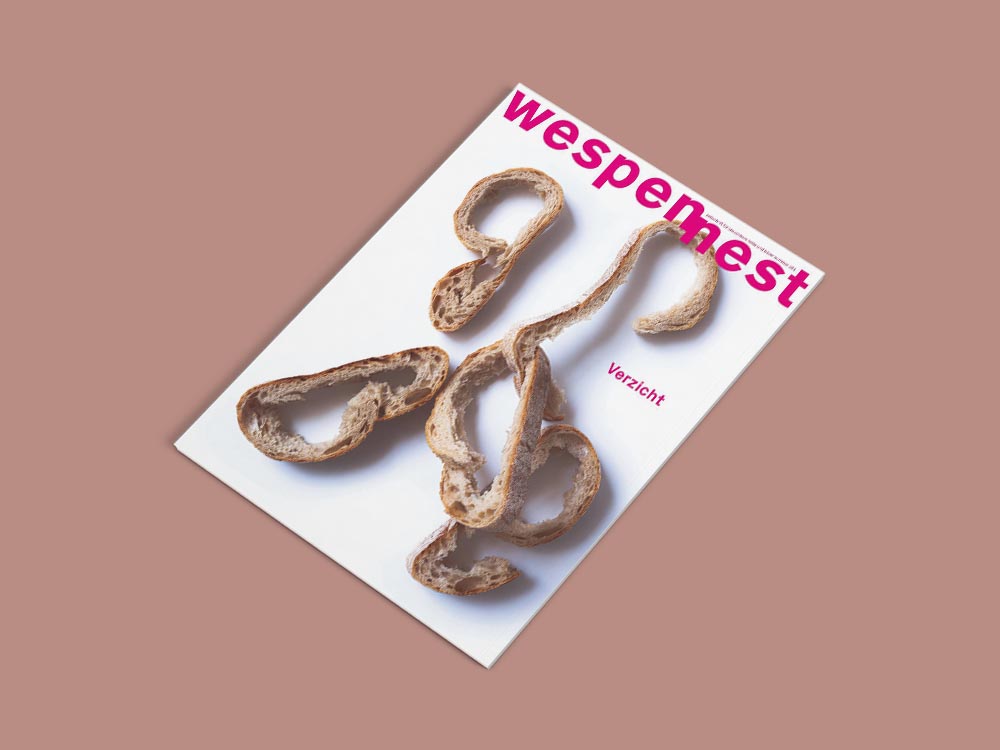 
The German noun ‘Verzicht’ – the title of the latest issue of Austrian journal Wespennest – is untranslatable into English except with a gerund: ‘foregoing’, ‘abstaining’, ‘eschewing’, ‘doing without’. What gets lost is the universal sense of the German: the English ‘foregoing’ is always transitive, and thus relative. ‘Verzicht’, on the other hand, requires no object, and even disdains one: it is a moral act in itself, for the sake of something better, higher.

In any case, ‘doing without’ is what we have all got used to over the past two years and, by all accounts, will have to get used to in the future.

But though the term is ubiquitous, its political use is ambiguous. As Wespennest editor Andrea Zederbauer writes, appeals to ‘forego’ can legitimize inequality. During the pandemic, particularly, ‘doing without’ is relative; eschewing something – ‘materialism’, say, or cultural life – assumes one has a choice. More often, politicians strenuously avoid the term, since demanding abstinence or self-sacrifice is a vote-loser.

The right word for refugees?

Then there is the question of whether foregoing can be prescribed – can there be such thing as an involuntary act of solidarity, for example? Under other circumstances, ‘loss’ would be more appropriate. Refugees experience life away from home more as bereavement than as abstinence, writes Andreas Kossert, author of a prizewinning ‘human history’ of refugees.

‘Many arrive in countries in which they are permanently unwelcome, as second-class citizens and sometimes not even that. Statelessness and camp existence awaiting them, often over generations. I therefore hesitate to refer to their loss as “foregoing”, since that always implies a conscious and voluntary decision. “Foregoing” suggests that there was an alternative, for the sake of something else. This might be true in individual cases, and indeed there are countless refugee success stories. From a long-term historical perspective, however, ‘foregoing’ fails to satisfactorily convey the dimension of loss.’

‘Syrian grapes’, Jabbar Abdullah’s story of escaping Assad, communicates this idea powerfully. The archaeologist and curator recalls the moment he rejected his father’s belief that foregoing freedom was a patriotic duty. To spare his family retributions, he fled Syria, residing in Egypt and Bulgaria before arriving in Germany. There he moved from one accommodation to another, each with the same ‘metal beds’, connected with his fellow refugees through a common story, a common destination and a sense of having ‘lost’ one’s name.

One anecdote, which lends the piece its title, poignantly describes Abdullah’s loss. Before leaving, he tells his mother that he will be back before the grapes on his family’s vineyard have ripened. A year later, when he has still not returned, he asks his mother to make jam with the grapes and bury the jar where hungry people would not find it. Three days later, the vineyard was bombed. The jam jar survived, and his mother fled to Lebanon.

Austerity for the many

Agnes Handwerk’s resumé of the economic debates around austerity ends with a description of the situation for employees of the German department store chain Karstadt. For the past few years, they had been voluntarily renouncing a portion of their wages in order to retain their jobs. Then, last year, Karstadt was bought by Austrian property speculator René Benko, who immediately closed half of the stores, which of course lie in prime inner-city locations.

For the employees of Karstadt, like the rest of those in the bottom third of the income scale barred from property ownership, the austerity-defying zero-interest policies of the ECB have no benefit at all.

This article is part of the 1/2022 Eurozine review. Click here to subscribe to our weekly newsletter to get updates on reviews and our latest publishing.