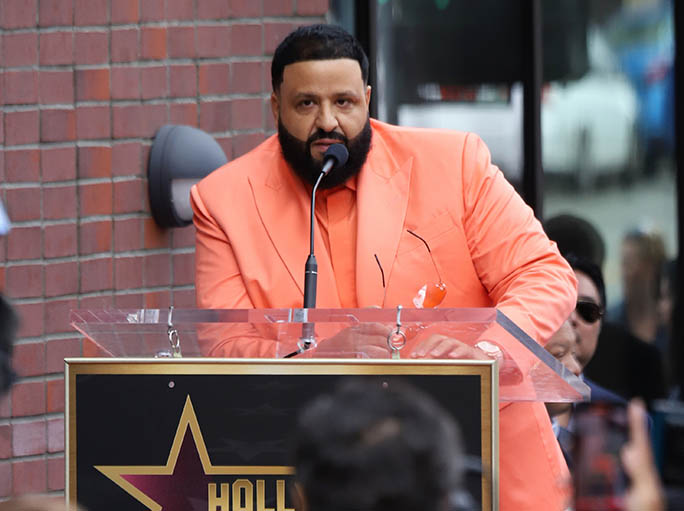 
DJ Khaled was honored with the 2,719th star on the Hollywood Walk of Fame outside of the independent record store Amoeba Music in Los Angeles on Monday. The platinum-selling hip hop music producer was joined by his wife, Nicole Tuck, and their two sons, Asahd and Aalam Khaled.

A few of Khaled’s famous friends and fellow collaborators, including Diddy, Fat Joe, Jay-Z and Teyana Taylor also attended to show their love and support as he received his star on the historic landmark. The “I’m on One” musician has worked with various artists throughout his decade spanning career like Beyoncé, Justin Bieber, H.E.R., T-Pain, Drake, Future, Chris Brown and Nicki Minaj, so it is no surprise that his ceremony would turn into a star-studded event.

For the special occasion, the sneakers collector was sharply suited in a full orange attire. His outfit consisted of a blazer jacket that had sleek lapels, thick cuffs and an outbreast pocket. To continue with a monochromatic aesthetic, Khaled teamed his outwear with an orange collard shirt and matching trousers.

The record executive continued to elevate his ensemble with brown square frames and a silver iced out watch. Other photos show that he completed his look with orange sneakers. The kicks were the perfect complement to his outfit. The shoes had a  round outer sole and padding around the ankle for extra support.