Jane Krakowski is known for playing ball-busting characters on TV, from the eccentric Jenna in 30 Rock to the narcissistic Jacqueline in the Unbreakable Kimmy Schmidt.

But for the last three years, she has starred in the comedy-drama Dickinson, where she plays Mrs Dickinson, the conservative mother of the great American poet Emily Dickinson — a role that undoubtedly made Krakowski’s own mother proud.

“Interestingly enough, my mum was a fan of Emily Dickinson,” the actress tells 9Honey Celebrity via Zoom while promoting the show’s third and final season, which premieres on Apple TV+ on November 5.

READ MORE: Will Smith says he ‘fell in love’ with co-star during first marriage

However, 53-year-old Krakowski quickly discovered this Apple TV+ offering was not your average period piece. Despite taking place in the 19th century, Dickinson is told through a modern lens and focuses on women’s equality and LGBTQ issues.

In fact, Hailee Steinfeld, who plays teenage poet Emily Dickinson, portrays the literary genius as a lesbian in the series.

“That was always the concept of the show, but also having Hailee’s voice added brought so much to the show being contemporary.”

Speaking of, the series also has a killer contemporary soundtrack, which features rappers such as Wiz Khalifa, who was purposely cast as the personification of Death in the series.

“When I first opened the script, it was about Emily Dickinson and it started with one of her poems and broke out into this heavy rap song,” Krakowski recalls. “It’s like, ‘Wait, this isn’t my mum’s Emily Dickinson. This is going to be my Emily Dickinson, so let’s go.”

“I also fell in love with the original script. I just loved what [series creator] Alena Smith was going for and I had never seen it told in this way,” she continues. “I love how anachronistic the show was and I was thrilled to not only play a character that was different to the characters I had most recently played, but also the comedy was a different style of comedy.

“The comedy is rooted in the times, in the character’s development. It’s just wonderful and hilarious and incredibly structured joke after joke after joke. So it was a different form of comedy and I was excited to give it a shot.”

Clever comedy aside, Krakowski was also attracted to the strong female cast and crew on the show. Created by Alena Smith and starring Steinfeld, the witty series also stars Anna Baryshnikov as Emily’s sister Lavinia, Ella Hunt as Emily’s love interest Sue, and Darlene Hunt as the family’s maid Maggie.

“Our creator is female, so many of our producers are female and so many of our directors were female. Obviously having a heavy female cast was wonderful as well,” Krakowski says, proudly.

READ MORE: Grandmother’s ‘menopause’ symptoms were something much more sinister

“It was interesting in Season 3 there was an episode where Mrs Dickinson delivers a child and it was all the women of the family in one room at the one time. It was one of those moments where I looked around on set and said, ‘Oh wow, this feels great because it’s all about these women together.’

“I will always remember those days of filming that episode because you really felt the strength and talent of all the women that were involved.”

Dickinson Seasons 1 and 2 are available now on Apple TV+, with Season 3 premiering this Friday. 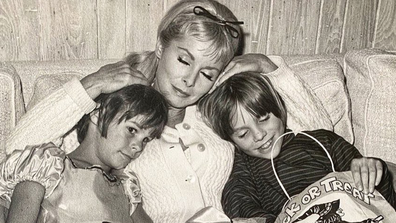