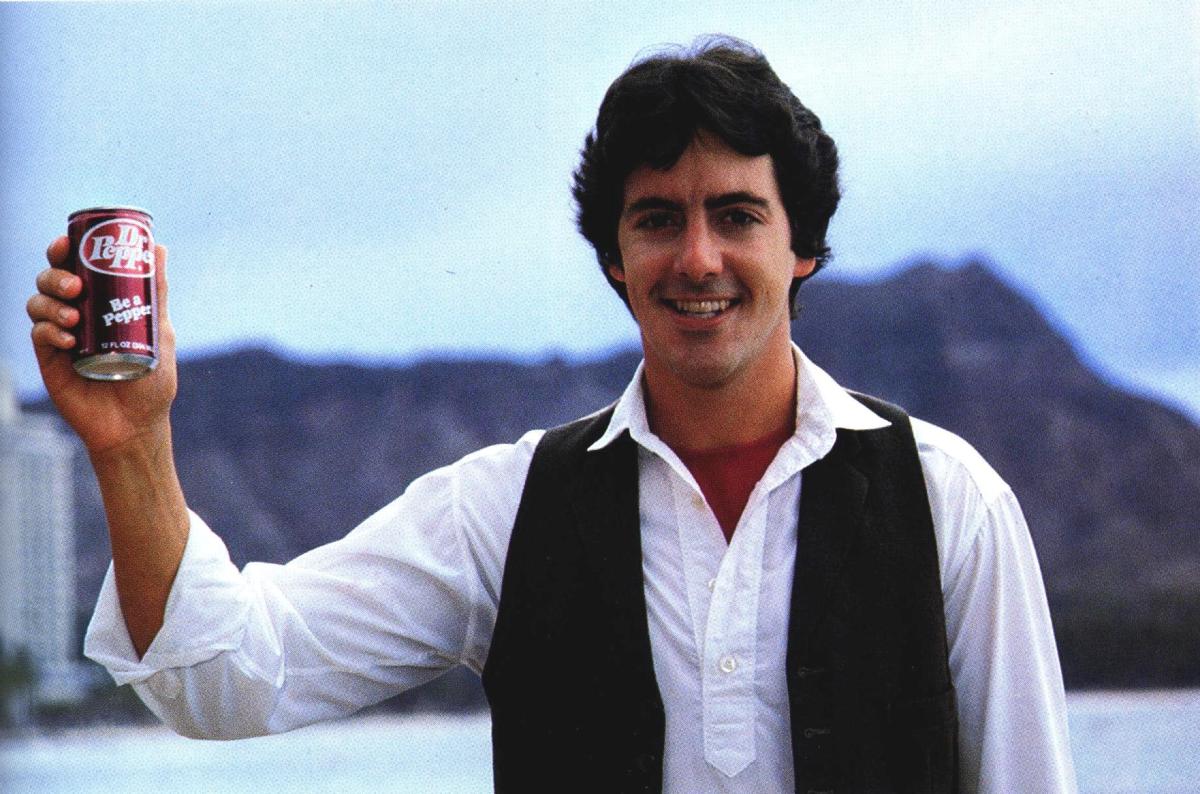 
The Super Bowl may be the NFL’s biggest night, but it’s also a super-sized stage for blockbuster commercials. And this year’s showdown between Cincinnati Bengals and the Los Angeles Rams — which airs Feb. 13 on NBC — is already fully booked up with high-priced, star-powered ads, hawking everything from AT&T to BMW vehicles fit for Greek gods. The success of these spots will be judged in real time by Super Bowl LVI audiences, whose online and IRL reactions will determine if any of the ads get a sequel … let alone sell products.

For a textbook example of an ad campaign that ticked both of those boxes in a big way, look no further than Dr Pepper’s immortal “Be a Pepper” series. Premiering 45 years ago in 1977, the hugely popular spots featured David Naughton extolling the virtues of the sweet-tasting soda in spirited song-and-dance numbers. Over a four-year period, the future star of the horror classic, An American Werewolf in London cranked out multiple “Be a Pepper” commercials, occasionally joined by such famous faces as Charlie Rich, Mickey Rooney and even Popeye the Sailor Man.

“They were kind of a big deal,” the ever-modest Naughton tells Yahoo Entertainment about his career as Dr Pepper’s most popular pitchman. “They made a big splash.”

They were also a crucial financial lifeline for a young performer looking for his big break. In the mid-1970s, the Connecticut-born Naughton had relocated to Manhattan after a two-year stint studying Shakespeare in London. “My first professional job was a production of Hamlet starring Sam Waterston,” he remembers now. “We did that over the winter months in 1976, and then it was like, ‘OK, now you’re going to find out what it’s like to be an out-of-work actor in New York.”

Fortunately, Naughton had a leg up on the competition thanks to the fact that his commercial agent had taken some liberties when it came to his client’s resume. “One day, my agent told me, ‘You have a dance audition [for a commercial],'” he says, adding that he’d never indicated to his rep that he possessed any dancing expertise. “This was New York, where they have the best dancers in the world on Broadway! I had a ‘Not a chance in hell’ look on my face.”

Still, the struggling actor knew better than to turn down an audition, even for a gig he seemed extremely unlikely to book. At that point, he only knew that a New York ad agency was looking for a fresh face to star in a Texas-based soda company’s newest campaign. That soda, of course, was Dr Pepper, which was created in 1885 — one year before Coca-Cola came along. (The two brands have had a somewhat contentious history that included multiple lawsuits, and a failed acquisition attempt. Today, Dr Pepper is owned by Keurig Dr Pepper Inc.)

No one was more surprised than Naughton when his footwork impressed the agency enough to bring him back for multiple callbacks, during which he learned more details about what Dr Pepper had planned. “They told me, ‘It’s a 22-day shoot for three commercials: a 60-second spot and two 30-second spots, and there was travel involved.”

As he closed in on the role, he was also clued into the whole concept behind the “Be a Pepper” campaign. “Their idea was that there’d be a Pied Piper-type character starting in New York and going to San Francisco, collecting people along the way who were going to be Peppers,” Naughton remembers. “I was like, ‘What does this Pepper guy look like?’ I was hoping it wasn’t going to be curly hair, curly shoes and a hat with a feather. I didn’t want to be a Pied Piper comedy act.”

Once Dr Pepper confirmed that it had a more modern-looking Pepper Piper in mind, Naughton signed on the dotted line. And while his initial deal was just for three commercials, the “Be a Pepper” campaign proved such an out-of-the-gate hit that he was quickly re-signed for multiple contracts as the face of the brand. “We would do four ads in the summertime, all across the country,” he says, adding that he’d frequently get recognized on the street even when cameras weren’t around. “There was a lot of momentum year-in and year-out, and it became quite a big campaign for them.”

As Naugton’s profile grew, so did the budgets and scope of his “Be a Pepper” spots, which won multiple Clio Awards — the ad industry’s answer to the Oscars. As the ad campaign continued, it wasn’t uncommon to see his Pied Piper act bringing a variety of athletes and celebrities into the ever-growing Pepper family.

“Jimmie Walker, Jerry Hall, Nancy Allen and Jennifer Grey — they were all Peppers,” he recalls. “Some of them were in different stages of their careers and weren’t necessarily famous at the time that they were doing these spots. It’s fun to go back and watch them now and go: ‘Wait a second, that’s James Widdoes from Animal House, who went on to become a big sitcom director!’ You never know who’s a Pepper out there.”

Compared to the cartoon sailor man’s demands, working with a flesh-and-blood legend like Mickey Rooney was a breeze. “We only had him for a limited period of time, so we rehearsed everything before he walked in,” Naughton says of the 1980 ad that featured the then-60-year-old star of such classic silver screen musicals as Babes in Arms and Strike Up the Band. “He couldn’t have been more fun, and you could tell that he was enjoying it, too. It was a musical, and he was getting to be his classic character.”

In fact, Rooney was having such a good time, he nearly overstayed his welcome. “He kept saying, ‘Let’s try this,'” Naughton says, laughing. “And then he would want to tell stories and talk about all these ideas he had for other projects, some of which became a couple of big TV movies. We had to tactfully ask him to go because we had more to do!”

But just like a chilled bottle of Dr Pepper, the good times couldn’t last forever. By 1981, Naughton was itching to try something new and he got that opportunity when John Landis cast him as the furry title character in An American Werewolf in London. And contrary to popular belief, his foray into body horror didn’t cost him his squeaky-clean Pied Piper gig.

“Somebody somewhere decided, ‘Hey, let’s come up with an explanation,'” he says of how that rumor got started. “I basically had said to the advertising agency, ‘I think I’m ready to move on,’ so it was my decision. I know that I probably could have hung in there a little bit longer because they wanted to be No. 3. You know — it was Coke, Pepsi and Dr Pepper.”

Not for nothing, but Naughton hasn’t sworn off soda forever. The actor slipped on his dancing shoes again for a 1988 Diet Dr Pepper spot that referenced his Pied Piper past.

And to celebrate Dr Pepper’s 125th anniversary in 2010, he led a flash mob onto the bustling floor of the New York Stock Exchange for a toe-tapping “Be a Pepper” breakdown.

In the 45 years since the first “Be a Pepper” spot, the campaign’s lasting influence can be glimpsed in major soda commercials that play during the Super Bowl and star the likes of Britney Spears and Jonah Hill. Naughton also can’t help but draw parallels between his own career and a certain Pepsi-drinking King of Pop.

“I used to joke about Michael Jackson: ‘Why does he want to follow everything I do?'” the actor says, chuckling. “You know, I did a Dr Pepper campaign, and he had a whole Pepsi campaign. I was in An American Werewolf in London, and he was in Thriller. It’s like, ‘Michael, find your own path!'”

You can’t blame him for wanting to be a Pepper, too.