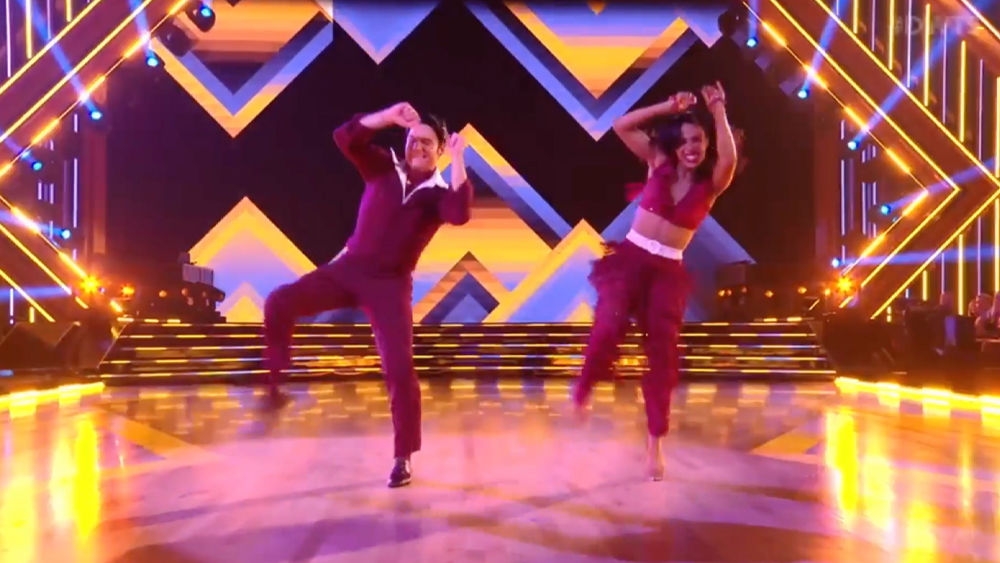 
After reporting multiple cases of Covid in the last week, Dancing with the Stars returned to the Disney+ ballroom Monday to honor Elvis Presley and to showcase how much Tyra Banks towers over her hosting partner Alfonso Ribeiro. Those two need to stand at opposite sides of the stage! The pro lineup was unfortunately one hoofer short: Daniella Karagach tested positive for the virus overnight so her partner Joseph Baena had to mask up and perform with fill-in troupe dancer Alexis Warr.

Let’s roll the tape on week 2!

Cheryl Ladd and Louis Van Amstel. The duo took an adorable spin in a convertible before their performance, but there wasn’t a lot that was cute about their tango to “A Little Less Conversation.” Ladd got lost, missed many, many steps, and was genuinely overwhelmed by what was expected of her. But damn, the ‘ol girl looks great! “That would have been a great routine but we got on the wrong foot a couple of times,” said judge Carrie Ann Inaba. “I appreciate how many times you came back. You kept coming back.” Score: 21 out of 40

Teresa Giudice and Pasha Pashkov. While rehearsing in New Jersey, Giudice reminisced over how she and her dad used to watch DWTS before he died. Pashkov tried to get her to inject that passion into her jive to “All Shook Up,” but the judges weren’t moved. (Pashkov also had to perform with a mask because he’s married to Karagach). “It was bright and it was lively,” said judge Len Goodman. “The problem was there was too many faults in your leg action. Not sharp enough in the kicks, one of two mistakes going on.” Score: 23 out of 40

Joseph Baena and Alexis Warr. Tough break for the body builder; he’s missing his perfect partner and had to perform the Viennese waltz with a stranger — and in a mask that didn’t fit well, to boot! But as judge Derek Hough said, “it could have been a catastrophe and it wasn’t.” “You were genuinely leading,” added Inaba. “Beware of your hands, they go into pancake mode.” Score: 24 out of 40

Jessie James Decker and Alan Bersten. The country pop singer vowed to work on straightening her legs. She must have made some progress during rehearsals: she and her mile-long ponytail opened the show by performing the foxtrot to “Trouble.” “I like the mix of steps, I felt your legs were stronger,” said Goodman. “For me its an improvement over last week.” Score: 25 out of 40

Sam Champion and Cheryl Burke. The ex-weatherman is still getting used to Burke’s tough love coaching style but it’s definitely working: his posture was better than last week and more importantly, he showed a lot more confidence during the Viennese waltz to “Heartbreak Hotel.” “Cheryl can be real bossy and tough teacher but she gets results,” said judge Bruno Tonioli. “You looked like a leading man.” Score: 26 out of 40

Vinny Guadagnino and Koko Iwasaki. The reality star was embarrassed about having the lowest score last week, so he called Mike “The Situation” Sorrentino for a pep talk before tackling the quickstep to “Viva Las Vegas” in his black jumpsuit and shiny Elvis wig. “Just like a Las Vegas gambler, you went all in and it paid off,” said Goodman. Score: 27 out of 40

Jordan Sparks and Brandon Armstrong  The singer won a karaoke contest as a kid by singing “Hound Dog,” so she’s definitely familiar with the song – just not with the concept of quickstepping to the speedy tune. She struggled to keep up with Armstrong, which the judges noticed. “There has to be control,” said Goodman. “Your big problem is your frame. It’s loose, you have to try to strengthen up your frame and then you will go places.” Score: 27 out of 40

Shangela and Gleb Savchenko. Feeling like “Beyonce at the Super Bowl,” the drag diva kept up the same energy from premiere night and injected it into her enthusiastic quickstep to “Shake, Rattle and Roll.” But a snafu kept her from improving over last week’s score. “You are so sharp when you perform, I like when you commit to every single movement,” said Inaba. “Great job.” Score: 28 out of 40

Heidi D’Amelio and Artem Chigvintsev. The social media star’s foxtrot to “Suspicious Minds” was a big improvement over her week one cha cha. “It had elegance, it has sophistication. Beautiful musicality through your arms. It needed a little more freedom on occasion but overall I was really surprised how good that was,” said Goodman. Score: 28 out of 40

Selma Blair and Sasha Farber. The actress had a terrific first week; who wasn’t moved by her performance after learning about her personal battle with MS? Jiving to “Jailhouse Rock” was a whole new challenge, but the orchestra did Blair a favor Monday night by slowing the tempo so she had time to perform a cartwheel and splits. “You made it yours and you made it work,” said Tonioli. Score: 28 out of 40

Daniel Durant and Britt Stewart. The deaf actor got a surprise visit from his moms Lori and Mary during rehearsal before jiving out to “King Creole.” Man, did he show great face! Or as Banks described it, “stank face.” His CODA co-star Marlee Matlin was there to support him, but Hough failed to call out her talented date — the Oscar winning Troy Kotsur. “It was so captivating watching you,” said Hough. “The musicality was incredible.” Score: 29 out of 40

Trevor Donovan and Emma Slater. The actor still moves with trepidation in rehearsal and feels “vulnerable,”  but his rumba to “You’re Always On My Mind” gave him a chance to show off his sex appeal and awesome abs. Tonioli couldn’t stop fanning himself and Banks was so preoccupied with Donovan’s hotness that she forgot to queue up Goodman. “Remember when you were scared of dance? You love dance,” said Hough. Score: 30 out of 40

Gabby Windey and Val Chmerkovskiy.  The Bachelorette showed off her engagement ring and new fiancé Eric Schwer before performing the Viennese waltz — and displaying her tiny tush during all those twirls — to the classic “Fools Rush In.” “I am totally swept away,” said Tonioli. “The partnering with you and Val, two instruments in total harmony.” Score: 32 out of 40

Wayne Brady and Witney Carson. The Let’s Make a Dealer performed last for the night with a terrific jive to “Burning Love.” The man sure knows how to have a good time. “It was a proper great jive. I really enjoyed watching you dance. I want you to realize this competition is a marathon. I want you to protect your knees because I think you are a fabulous dancer.” Score: 32 out of 40

Charli D’Amelio and Mark Ballas. The stamina of the TikTokker was definitely tested as she practiced the quickstep with her coach, but she remembered to keep her elbows and energy up for “Bossa Nova Baby.” Also, Banks is apparently obsessed with D’Amelio’s neck. Keep up that great feedback, girl! “That side by side section over there was so good,” said Hough. “Your personality really shines through.” Score: 32 out of 40

Bottom two couples were Giudice/Pashkov and Ladd/Van Amstel. Hough and Tonioli saved Giudice, while Inaba saved Ladd. Since Goodman has the final say, he chose Ladd over Giudice so the reality star goes home.