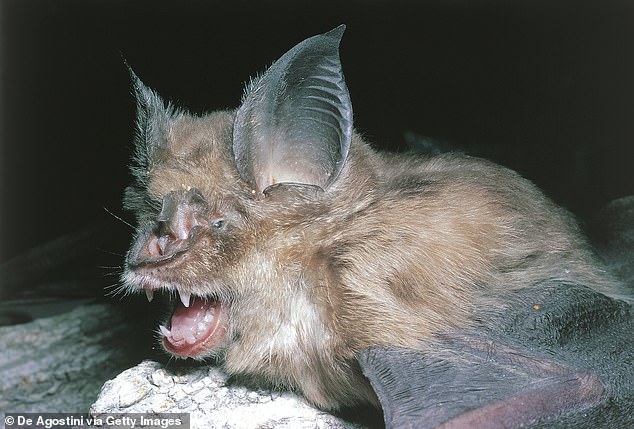 
Covid did not originate in an infamous south Chinese bat cave at the centre of the ‘lab leak’ theory, a French study has claimed.

The Mojiang cave has been touted as the possible birthplace of the virus after it emerged six miners were struck down with a mysterious flu-like illness in 2012.

Scientists from the now-infamous Wuhan Institute of Virology (WIV) were sent in to investigate at the time and sent bat samples back to the lab 1,000 miles away.

One of the viruses they collected is the closest known relative to the one that causes Covid, sharing almost 97 per cent of its genetic make-up.

Proponents of the lab leak theory believe that either the miners were infected with an early version of Covid or that the pandemic-causing pathogen was the result of experiments on viruses sent back to Wuhan.

But French researchers now say neither could be true after a retrospective study into the medical reports of the miners at the time.

They said their symptoms were too different to be Covid and questioned why no hospital staff or close contacts of the miners fell ill.

Writing in the study, they added: ‘One must also wonder why a virus which killed more than 4 million and infected more than 200 million in 18 months did not cause any illness in 7 years from 2012 to 2019.’

They added that RATG13 – the virus which closely resembles Covid and was found in horseshoe bats in Mojiang – was not capable of infecting humans and there was no evidence to suggest tinkering with it in a lab could give it that ability.

However, one of the lead scientists behind the latest study had ties to the lab in Wuhan, raising a possible conflict of interest. 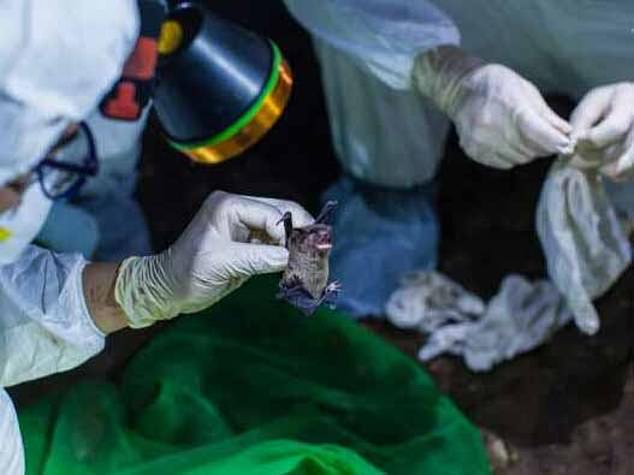 Researchers from the Wuhan Institute of Virology were the first to link SARS and bats for the first time during a study in 2004 after raiding a cave in Yunnan province (pictured at the time). This cave is not the one in question 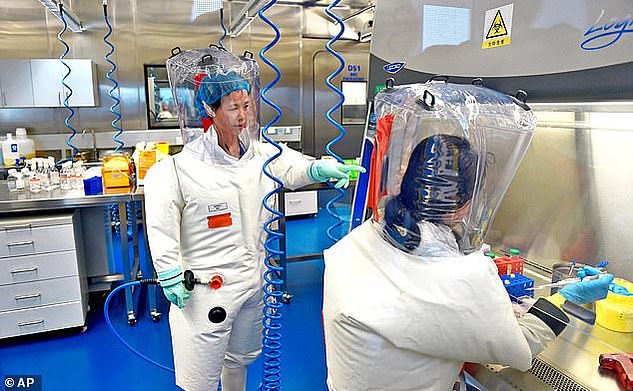 The WIV is the high security lab which specialises in manipulating dangerous coronaviruses at the centre of the alleged cover-up.  Pictured: Researchers in the lab in February 2017

The six miners struck down with the mystery pneumonia had been sent into the cave in Mojiang to clear bat guano in April 2012. They were aged between 30 and 63, and three died as a result of their infection.

The latest study, led by the Roger Frutos, a microbiologist at the French Agricultural Research Centre for International Development, said hospital records highlighted ‘major discrepancies’ between their illnesses and Covid’s typical symptoms.

WHO will start NEW investigation after first probe was whitewashed

The World Health Organisation will start a new investigation into the origins of the Covid outbreak and probe whether the virus came from a Wuhan lab.

A new team of experts will be appointed, including experts on biosecurity, laboratory safety, genetics, and how viruses spread to humans.

They will look into whether coronavirus leaked from a lab in Wuhan, at the end of 2019 – a claim denied by China, which also wants the WHO to examine if the virus originated in another country.

It comes after US President Joe Biden ordered intelligence agencies to investigate the ‘lab leak’ theory.

A WHO spokesman said the new team’s ‘priority needs to be data and access in the country where the first reports were identified’.

The earlier investigation recommended China examine the earliest suspected coronavirus cases, with the team claiming in its final report that the data provided by the country was insufficient.

But out of the more than 400 page report, just three were allocated to the lab leak hypothesis.

The original investigation was mired in controversy because it was spearheaded by Peter Daszak who had undisclosed ties to the Wuhan lab.

They pointed out that one of Covid’s tell-tale symptoms is a dry cough, whereas the miners suffered from a very different kind of cough.

They were found to be coughing up blood or mucus.

CT scans showed they also did not have the same lung scarring seen in many hospitalised coronavirus patients.

All of the miners suffered from swelling of lymph nodes in their chest or ‘water on the lungs’, symptoms only reported in fewer than 0.01 per cent of Covid patients.

‘We thus dismiss the Mojiang mine as the origin of SARS-CoV-2,’ the researchers wrote in the paper published in the journal Environmental Research.

‘Dismissing the Mojiang mine theory leaves the laboratory leak narrative without any scientific support thus making it simply an opinion-based narrative.’

However, the researchers were accused of failing to refute the central assertions of the lab leak theory.

Professor David Livermore, a microbiologist at the University of East Anglia, told MailOnline: ‘The theory argues that this virus [which infected the miners] maybe was the progenitor of SARS-CoV2… not that it was SARS-CoV2 itself.

‘So, some difference in pathology is not unreasonable.’

He said that he was still wasn’t convinced the lab leak theory was the most likely origin of the virus.

But he admitted there were some ‘remarkable coincidences’

He added: ‘The pandemic began in Wuhan, which is far from the bat caves of south China (and) does house the institute of Virology undertaking molecular work, including gain of function, on coronaviruses.’

His comments were echoed by Professor Lawrence Young, a virologist from Warwick University, who said it was ‘entirely possible’ that Covid’s origins could be traced back to the caves in Mojiang.

He told MailOnline ‘While I still think that this is the result of natural spillover from an animal, a lab leak accident still can’t be ruled out.’

Professor Livermore added that the lab leak theory had turned from conspiracy to mainstream thought because extensive searches had failed to find any natural reservoir of SARS-CoV-2.

He said it was also ‘important’ to note that one of the authors of the paper, Christian Devaux, was involved in setting up the Wuhan Institute of Virology (WIV). Dr Devaux’s involvement is listed in the paper’s disclosures.

The WIV specialises in manipulating dangerous coronaviruses, in what’s known as ‘gain of function’ research.

The risky experiments involve engineering viruses to make them more infectious or lethal, in the hope of developing treatments and vaccines to get ahead of outbreaks.

But the French researchers say RATG13, the pathogen first discovered in horseshoe bats in Mojiang, is unlikely to have been used to create Covid.

They said that while it is real, the virus particles were not isolated from animals meaning researchers only have samples of its genetic code, and not physical copies of the virus itself.

‘Therefore, there is no evidence that this sequence corresponds to any real and viable virus or even that all reads are coming from the same virus,’ they wrote in the study.

‘RATG13 has never been isolated as a virus and replicated in cell cultures. It has no physical existence and thus cannot leak from a laboratory.’

But questions still hang over the Mojiang caves. Attempts by Western journalists to visit the caves have been denied and the caves are closely monitored by Chinese authorities.