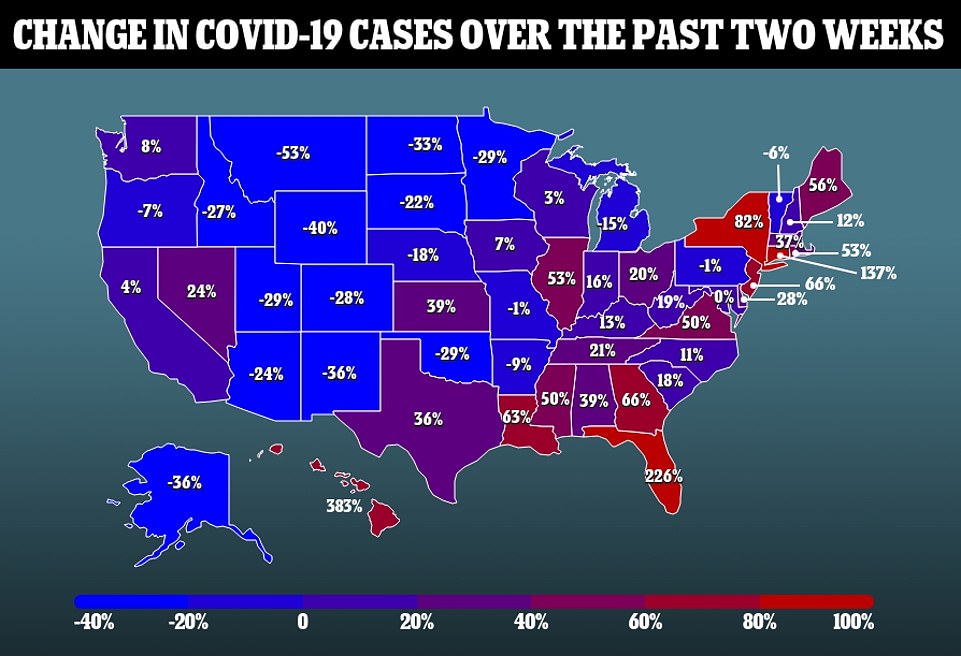 
While Covid cases are continuing to surge in parts of America during this new, Omicron variant-fueled, Covid surge, some areas are finally seeing the end of surges that began in early fall. States like New York and New Jersey in particular are getting slammed by the new variant.

Hawaii is currently the U.S. leader in growth of cases, up 383 percent over the last two weeks. Hospitalizations have not kept pace, though, only growing six percent during that time span, a sign that the 63 percent of the population that is vaccinated has some protection from the virus.

New York and New Jersey are the states believed to have the largest prevalence of the new variant, and both are experiencing an increase in cases as well. Most recent data published by the CDC last Tuesday estimates that a combined 13 percent of cases in the two states are of the Omicron variant – far outpacing the 2.9 percent national rate and every other region.

Both are suffering sharp increases in cases as well, with New York posting an 82 percent increase in cases over the past two weeks, and New Jersey up 66 percent.

The country as a whole is not suffering a Covid surge, though, with the virus even starting to recede in some areas. States in both the Northeast and Great Plains – both regions that experienced a sharp increase in Covid cases in early fall – are now seeing those surges decline. 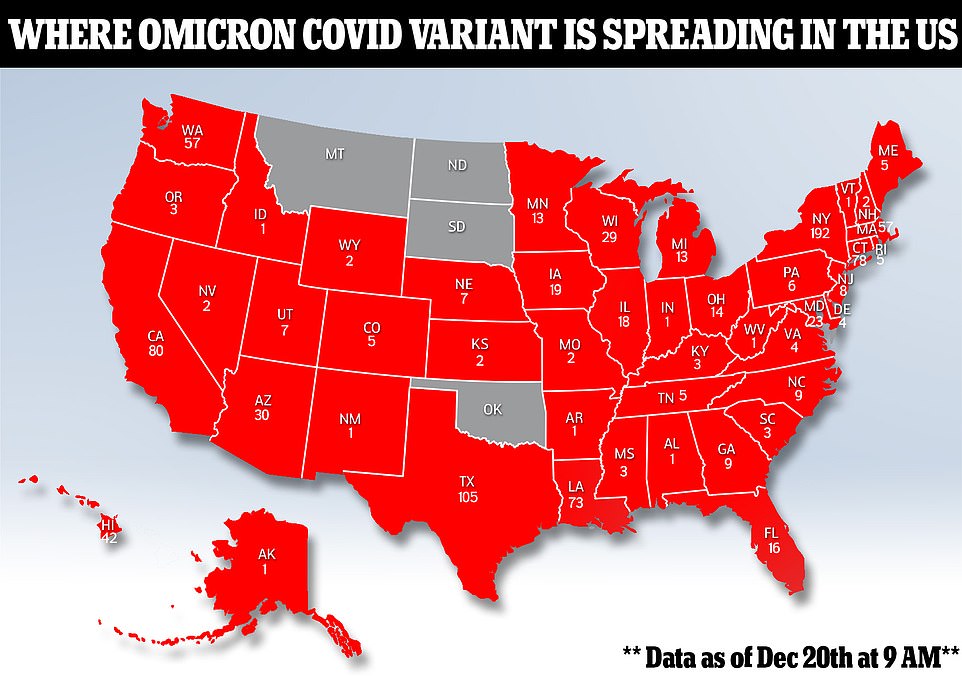 Surges in New Hampshire, Massachusetts and Rhode Island are still ongoing, with cases still rising, but the rate of growth has slowed in recent days, showing the surge could be burning out.

These data match that of South Africa, the nation where the variant was first detected, Covid is beginning to recede, a promising sign that the nation’s Omicron fueled outbreak is running out of steam after a month.

The nation is averaging 20,082 new cases every day, a decrease from last week when over 23,000 cases were being reported every day. While it is still a much larger figure than what the country was reporting only a month ago, it signals that the variant is potentially burning out.

Hospitalizations are on the way down, though, with eleven times fewer South Africans being hospitalized with Covid now than were during the Delta surge over summer – a sign of hope going forward as the U.S. and UK begin their own struggles with the virus.

Currently, states in the Northeast are leading America’s COVID-19 surge, but case growth is starting to settle. Rhode Island, for example, is recording the most new cases per 100,000 residents as on Monday morning, at 101. The state that was once experiencing a doubling of cases over two weeks is now only seeing 53 percent growth, though, as the virus starts to slow down.

New Hampshire is averaging 90 new cases out of every 100,000 residents every day, second in the nation and a 12 percent increase from previous weeks. It appears that its surge is nearing its peak as well, though, as case growth as slowed to a halt in recent days.

Vermont has the highest vaccination rate in America – with Rhode Island and New Hampshire following just behind – with 76 percent of residents fully vaccinated. The state was the site of one of the largest Covid surges in the nation only weeks ago, but now things are trending in the right direction.

The state is still averaging a relatively high 65 out of every 100,000 residents testing positive for the virus every day, tenth in the country, but new cases have shrunk by six percent over the past two weeks. Other states in the region that are starting to see case growth slow, and even Connecticut which currently holds the ‘worst outbreak in America’ honor, should see Vermont as a promising sign for the future. 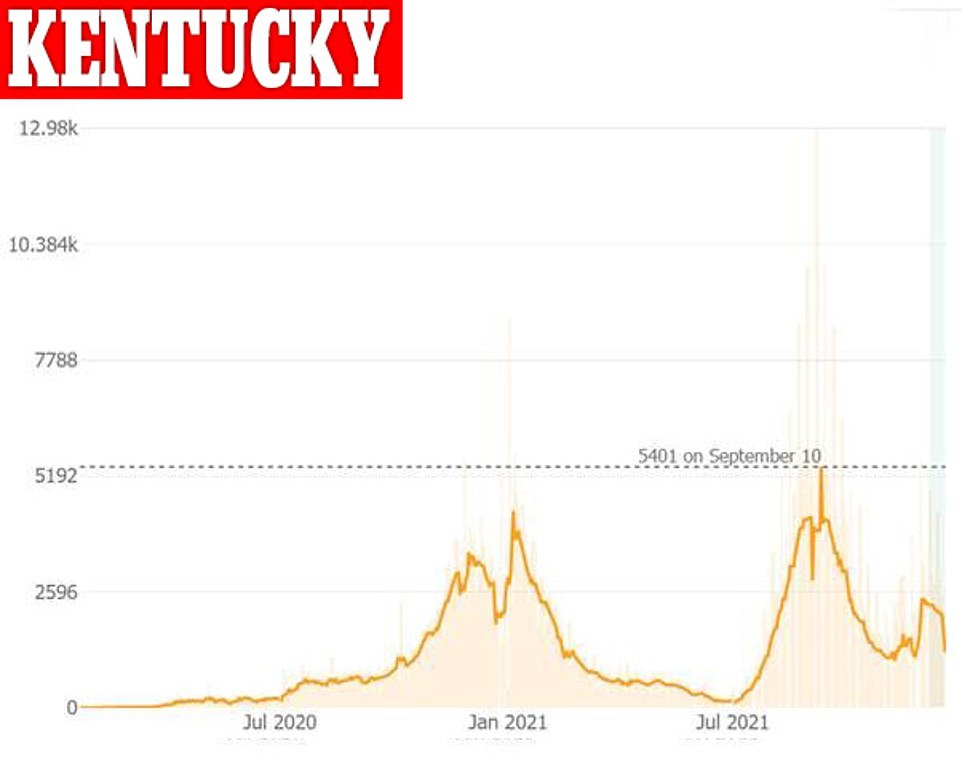 Montana, which has only fully vaccinated 54 percent of its residents, has seen daily cases drop 53 percent, and has one of the lowest infection rates in America with 14 of every 100,000 residents testing positive every day.

Wyoming and Idaho are the two least vaccinated states in America, with 47 percent and 46 percent of their populations jabbed respectively. Both have managed to control the spread of the virus in recent weeks, though, with cases down 40 percent in Wyoming and 18 percent in Idaho.

Both are also recording 18 positive tests every day per 100,000 residents, also among the lowest rate in America.

States in the region were being hammered by Covid only a few months ago. From Washington on the Pacific Northwest coast to Michigan in the eastern time zone, the states up north went through the ringer in October. The virus seems to have burned out in the western half of America, though, quelling some fears that the rise of Omicron would make an already disastrous situation even worse.

Even Michigan, a state that had its hospitals sent into a crisis due to rising case earlier this month, is recording a 15 percent decrease in cases in recent weeks.

Missouri, Arkansas, Oklahoma, New Mexico, Colorado, Utah, Arizona and Oregon – all in the Midwest, plains, southwest or pacific regions of America – have recorded decreases in cases over the past two weeks. Washington and California are reporting minor increases of eight percent and four percent respectively.

This all comes as the Omicron variant lands in the U.S., and was expected to near-instantly cause case surges nationwide. The highly transmissible variant is certainly in America, accounting for three percent of cases two weeks ago and having been confirmed over 1,000 times as of Monday morning.

It has not made the massive impact it was expected to yet, though. The variant was known to in the United States as early as November 19, as a Minnesota man contracted the virus then from another person at an anime convention in New York City.

Now a month since the first recorded transmission of the variant within the U.S., only small select areas are suffering from surges.

America’s Covid situation is not rosy everywhere, though. In addition to New York and New Jersey, some southern states are experiencing surges as well.

Florida has experienced a 226 percent increase in cases over the past two weeks. Georgia (66 percent increase in cases), Louisiana (63 percent), Mississippi (50 percent) and Virginia (50 percent) are posting sharp increases as well. While some of these states are still reporting low cases totals per capita, these upward swings are a worrying sign that they are experiencing the early stages of an Omicron outbreak.

In the Midwest, Illinois may be suffering a large scale outbreak soon as well, with cases up 53 percent over two weeks as the rest of the region sees a decline in case growth.