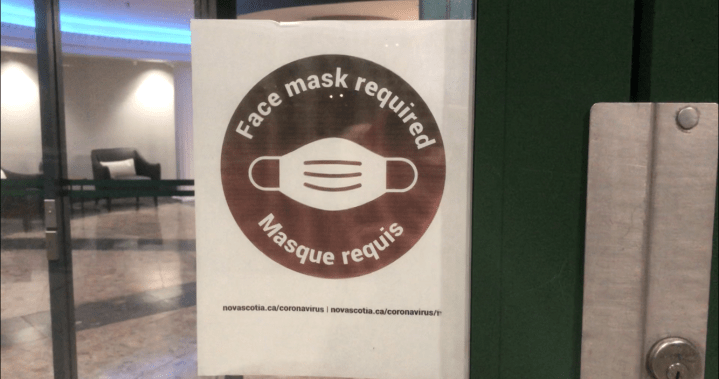 
Across the provinces signs to wear masks in indoor public spaces have become commonplace.

Nova Scotia first implemented mask mandates during the summer of 2020 and they’ve been here to stay, but that’s set to change on Monday.

The province announced last month that all COVID-19 restrictions, including mask mandates, would come to an end on March 21, but concerns are being raised that may be too soon.

“I struggle with this one,” said infectious disease expert Dr. Lisa Barrett.

“If we want to keep transmission of virus at a reasonable level and reasonably protect people who are at risk of getting very sick with COVID until the end of the respiratory season, at least the end of May, then we would not get rid of masking, testing and moderate socialization until the end of that period.”

N.S. to lift all COVID-19 restrictions on March 21, proof of vaccination gone Feb. 28

As of Monday, the province will no longer have group gathering limits, physical distancing will not be required, and businesses will not have capacity limits. Those lifted restrictions are welcome news to many, but the lifting of mask mandates is getting a more mixed reaction.

“Yeah, it’s time to lift some restrictions but in crowded spaces, especially buses and elevators and office towers, it makes common sense to have a mask mandate still in there at least for a couple of weeks,” said Ken Wilson, president of the union representing transit drivers.

“I don’t think anyone thinks COVID disappeared overnight. The main concern that we’re hearing from the majority of operators is that maybe we should pump the brakes on this and do the cautious approach.”

There are similar calls from the teachers’ union in regards to mask mandates being lifted in schools.

“There remain a lot of concerns, there’s a lot of students and staff that remain vulnerable to the harshest harms that COVID presents. A lot of immunocompromised staff and students in schools,” said teachers union president Paul Wozney.

On Thursday a group of eight pediatric doctors with the IWK released an open letter to Nova Scotia parents and students encouraging them to keep wearing masks in schools, even once the mandate is lifted.

“When we’re in periods of higher epidemiology and widespread community transmission and we really are in that type of epidemiology in the province, it is an important way to stop people from transmitting if they are mildly or asymptotic the virus to other people,” said Dr. Jeannette Comeau, a pediatric infectious diseases specialist with the IWK.

“The public health recommendation at least for April is going to be people where they have been required to wear a mask, whether it’s a workplace or public place that they continue to do so by choice,” said Dr. Robert Strang on Thursday.

But those who work in places where the risk of exposure is higher worry that recommendations aren’t enough.

“Encouraged and recommended are weak words, even mandatory for Halifax Transit couldn’t be enforced but the majority would follow those rules because they were rules,” said Wilson.

Wozney said that “what we’ve known in schools is that unless measures are mandatory, they’re not measures at all.”

So why not keep the mask mandate in place? Strang says that’s a decision that’s left to government.

“Recommendations to government are confidential but we’re still in those discussions. What is clear is the recommendation from myself directly to Nova Scotians is to continue to wear masks.”

On Friday afternoon, Premier Tim Houston changed course and announced that masks would remain in schools across the province for a few more weeks.