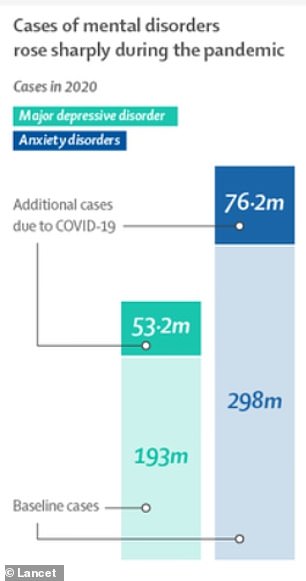 Cases of anxiety and depression spiked globally last year due to the pandemic. Researchers found that Covid caused a 28% growth in depression cases and a 26% growth in anxiety

An Australian research team led by the University of Queensland found incidences of both mental health conditions grew by around 25 percent in 2020.

Young people under the age of 25 and women were struck particularly hard.

The study adds to the growing data showing the negative impact the pandemic had on the world’s collective mental health.

‘Our findings highlight an urgent need to strengthen mental health systems in order to address the growing burden of major depressive disorder and anxiety disorders worldwide,’ said lead author Dr Damian Santomauro, a researcher from the University of Queensland, in a statement.

‘…Even before the pandemic, mental health-care systems in most countries have historically been under-resourced and disorganized in their service delivery. Meeting the added demand for mental health services due to COVID-19 will be challenging, but taking no action should not be an option.’

Researchers, who published their findings on Friday in The Lancet, performed a meta-analysis of 48 studies published during 2020 and in January 2021.

Two-thirds of the additional cases were among women, 35.5 million of the 53.2 million.

Women accounted for two-thirds of the growth in both condition, and bore the brunt of last year’s mental health impact

Young people were struck the hardest mentally, and researchers point to the closure of schools and other factors that caused instability in young people’s lives

The figures for anxiety are similar to those of depression, with 76.2 of 374 million cases being attributable to the pandemic, or a 25.5 percent growth.

And, just like depression, two-thirds of the additional cases of anxiety caused by the pandemic were among women.

‘The COVID-19 pandemic has exacerbated many existing inequalities, and social determinants of mental health,’ said co-author Dr Alize Ferrari, a researcher at the University of Queensland, about the sex disparity.

‘Sadly, for numerous reasons, women were always more likely to be worse affected by the social and economic consequences of the pandemic.

‘Additional caring and household responsibilities tend to fall on women, and because women are more likely to be victims of domestic violence, which increased at various stages of the pandemic.’

Younger people, especially those under age 25, also accounted for a large portion of the cases caused by the pandemic, which Ferrari blames of school closures and their increased likelihood to have lost their jobs during the pandemic – causing instability.

Countries in Latin America like Argentina and Mexico and in the Middle East like Egypt and Iran had the largest increases of anxiety and depression. Pictured: Nations colored darker red have growth rates of anxiety of depression over 36%. The orange and red countries have higher growth rates than those colored green or blue

‘School closures and wider restrictions limiting young people’s ability to learn and interact with their peers, combined with the increased risk of unemployment, also meant that young people were also more heavily impacted by major depressive disorder and anxiety disorders during the pandemic,’ she said.

‘It is crucial that policymakers take underlying factors such as these into account as part of measures to strengthen mental health services.’

The research team also determined that countries in Latin America and those in the Middle East experienced the largest increases in mental health conditions.

Countries including Argentina, Ecuador, Mexico and Peru in Latin America all have increases of both depression and anxiety of 36 percent or more.

Iran and Egypt were the most hard struck in the Middle East, with countries like Afghanistan, Syria and Turkey showing particularly large growth in depression as well.