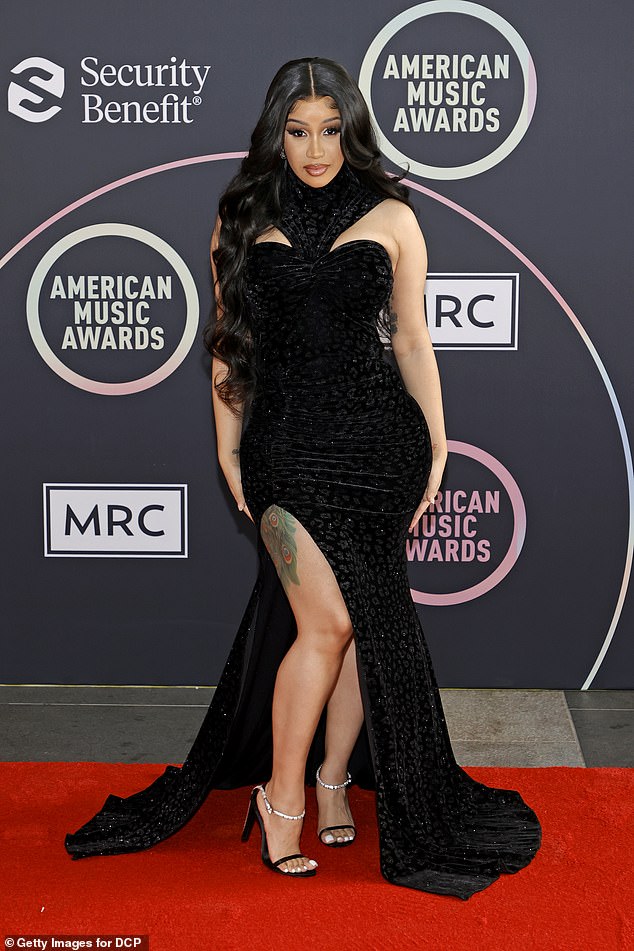 
Rapper Cardi B is helping to pay for the funerals of victims of the high-rise fire that killed 17 people, including eight children, in her native borough of the Bronx earlier this month.

‘I’m extremely proud to be from the Bronx and I have lots of family and friends who live and work there still. So, when I heard about the fire and all of the victims, I knew I needed to do something to help,’ said the Grammy-winning recording artist in a statement released Wednesday through the NYC mayor’s office.

‘I cannot begin to imagine the pain and anguish that the families of the victims are experiencing, but I hope that not having to worry about the costs associated with burying their loved ones will help as they move forward and heal. I send my prayers and condolences to everyone affected by this horrific tragedy.’

The city says the ‘partnership’ with Cardi, real name Belcalis Almanzar, will include the costs of ‘repatriation expenses for some victims buried in The Gambia,’ where many of the 19-story building’s residents are from.

The 17 victims ranged in age from two to 50 and died from smoke inhalation caused by a faulty space heater in a third-floor unit that investigators believe was left running uninterrupted for days.

Cardi B, 29, is stepping up to pay for the funeral costs for the victims of the deadly Bronx blaze that killed 17 people Above, Cardi at the American Music Awards in November The January 9 fire killed 17 people, including eight children, all from smoke inhalation Cardi’s contributions will help cover repatriation costs for residents who will be buried in The Gambia. Above, a makeshift memorial outside the Bronx building on January 13 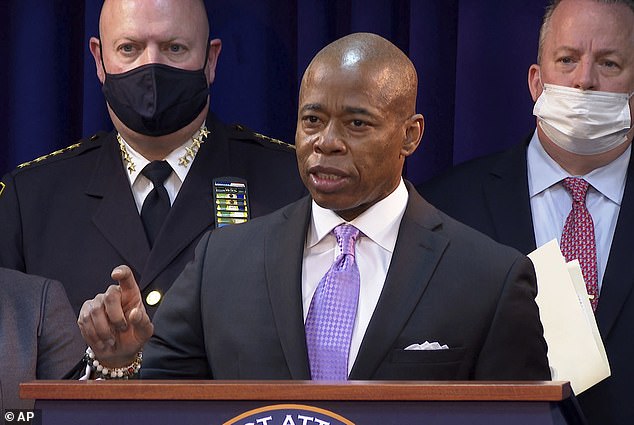 Mayor Eric Adams said: ‘We are grateful for Cardi B, a real superstar on and off the mic, for granting some critical financial relief to families of the victims’

Mayor Eric Adams said: ‘We are grateful for Cardi B, a real superstar on and off the mic, for granting some critical financial relief to families of the victims.

‘The city will be forever thankful to her and also to the grassroots donors and corporate partners who have been able to offer immediate support for our neighbors in need, to reestablish themselves during this difficult time.’

It is unclear how much money she donated to the city’s fund, which has already raised more than $2.5 million. The mayor’s office did not immediately respond to a request for comment from DailyMail.com. 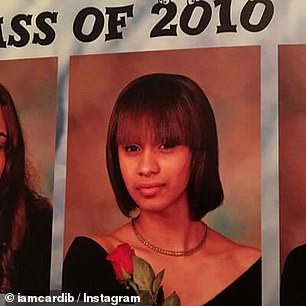 Cardi, 29, was raised in the Highbridge neighborhood and attended Herbert H. Lehman High School in the Bronx

Cardi, 29, was raised in the Highbridge neighborhood and attended Herbert H. Lehman High School in the Bronx.

She often references the borough in her music, like in the 2017 song Bronx Season.

The rapper is known for her extravagant giving. She presented her husband, rapper Offset of Migos, with a $2 million check at his birthday party last month, TMZ reports.

On Sunday, New York Lt. Governor Brian Benjamin announced that the state of New York would be granting $2 million to a fund for the victims.

The fund ‘will provide tenants with case management services, personal property replacement, and relocation and rental assistance to help address critical household needs,’ according to a press release from Governor Kathy Hochul’s office.

Investigators believe the fire began in the Wague family’s third-story unit after a space heater was left running for days. Above, the apartment is seen completely destroyed 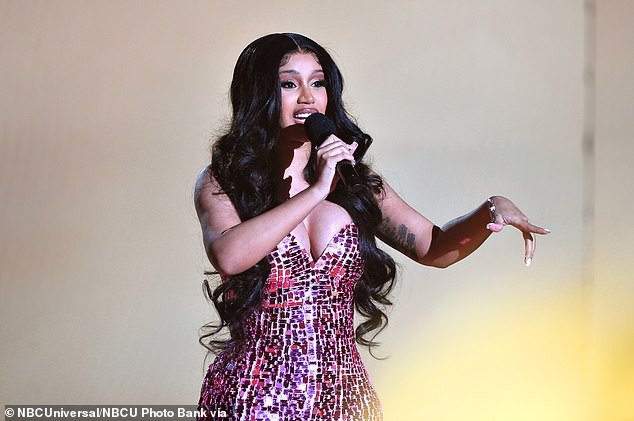 ‘I cannot begin to imagine the pain and anguish that the families of the victims are experiencing, but I hope that not having to worry about the costs associated with burying their loved ones will help as they move forward and heal,’ Cardi said in a statement

Fat Joe, a Bronx native, also started a relief fund for those affected by the fire, and has received contributions from Jay-Z and DJ Khaled.

‘I need all my people world wide to come together for the families devastated by the fire in the Bronx,’ he wrote on Instagram last week. ‘I’m donating and I’m asking everyone that has a Heart to donate. these people are mostly immigrants that have no where to go they lost everything. it’s 10 degrees in the Bronx today!’

Officials blamed a faulty space heater in a third-floor apartment for the blaze, which spewed plumes of suffocating smoke that quickly rose through the stairwell of the 19-story building.

Fire officials also found that the entry door to the unit where the flames ignited failed to automatically close — as it is designed to do — when the family residing inside fled. 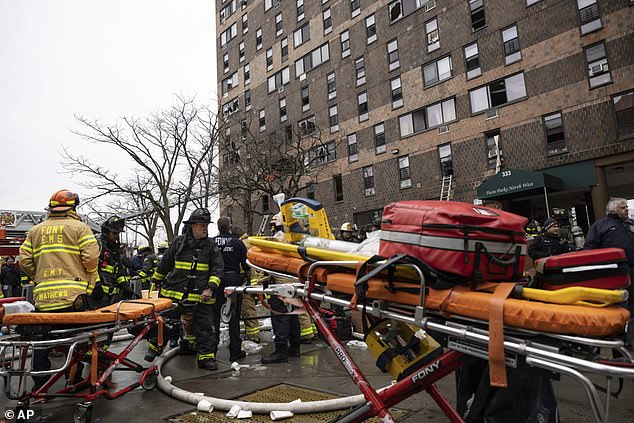 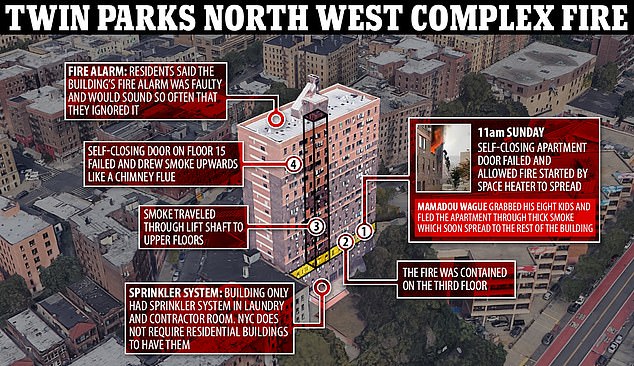 Some residents said space heaters were sometimes needed to supplement the building’s heat and that repairs weren’t always timely.

The fire at the 19-story Twin Parks North West Building was New York City’s deadliest since 1990.

All 17 victims of the horrific January 9 fire have since been named. 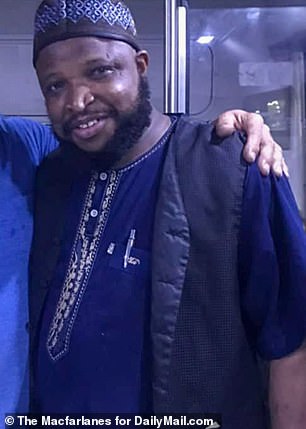 Parents Haja Dukureh, 37, and Haji Dukuray, 49 and their children were killed in the fire 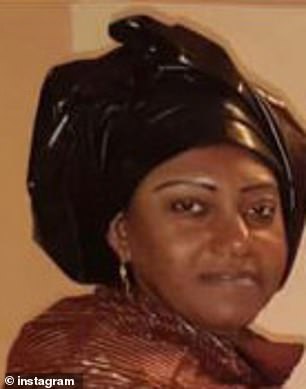 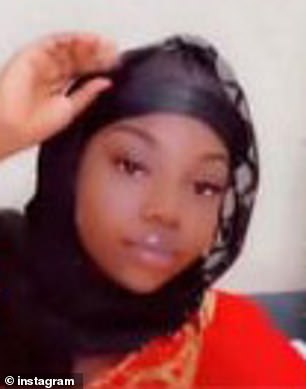 Fatoumata Drammeh (pictured), 50, was killed in the fire, her sister Koumba told DailyMail.com, who said that she and her family were ‘such lovely people’. Her daughter Fatoumata, 21, pictured on the right, also died 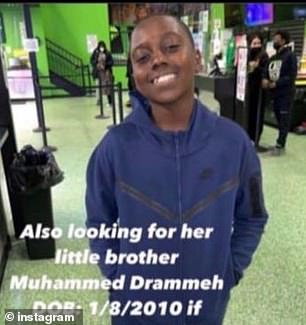 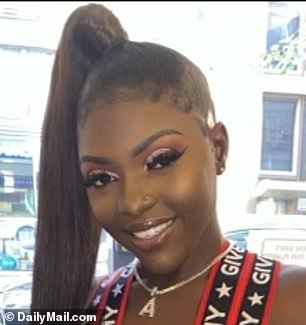 Fatoumata’s 12-year-old son Muhammad was the youngest member of the family to lose his life in the Bronx apartment building fire. Her daughter Aisha, 19, (pictured right) also died 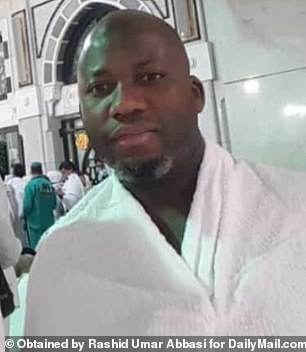 In addition, the fire also left 32 people hospitalized and 63 people in total were injured.

In the wake of the deaths, a coalition of officials, including federal, state and city lawmakers announced a legislative agenda they hoped would stiffen fire codes and building standards to prevent similar tragedies from happening.

A long line of black hearses began lining up outside the Islamic Cultural Center in Fordham Heights just after 10 am, according to the New York Times, and the men soon gathered around the caskets to transport the remains of their friends and family into the front of the prayer hall.

Hundreds of mourners were gathered inside to pay their final respects to 15 of the 17 victims of a Bronx apartment building fire, with women on the second floor consoling each other as the men prayed below.

Many hundreds more sat in tents lining East 166th Street in the Concourse section of the Bronx where they peeked through windows or watched the funeral service via livestream. 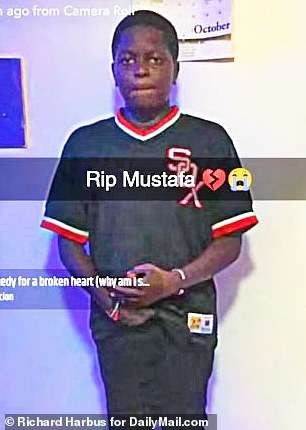 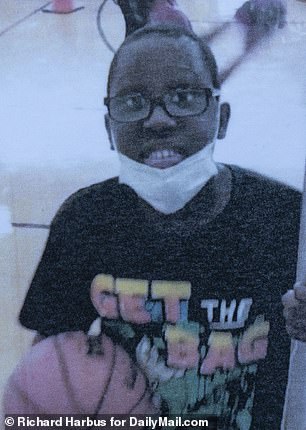 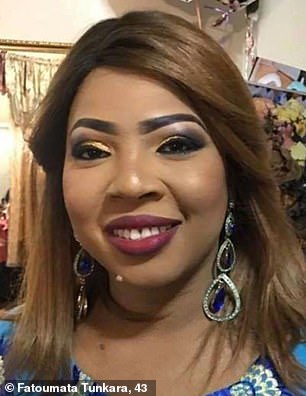 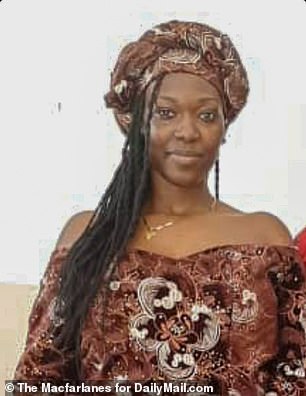 The services were beamed onto jumbo screens outside and in other rooms of the mosque.

At one point, two ambulances were arrived outside of the Islamic Center, with security officials telling crowds to disperse as EMS personnel carried an apparently unconscious woman from the building.

Fire officials told DailyMail.com they received reports of an ill person at the service at around 11.50am and two people were transported to a local hospital. Their identities and the condition they are in have not yet been released. 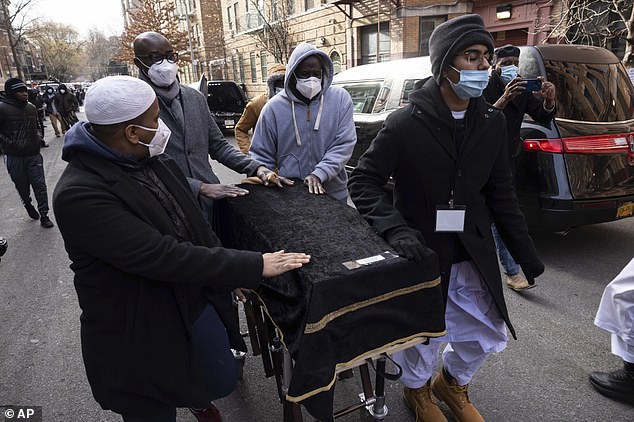 Mourners in the Gambian community of the Bronx wheeled the casket of Ousmane Konteh, 2, to the hearse following the funeral service for 15 of the 17 victims of an apartment building fire 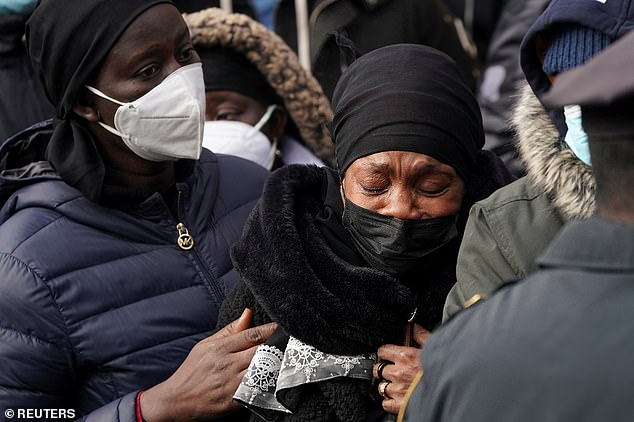 The mass funeral capped a week of prayers and mourning within a close-knit community hailing from West Africa, most with connections to the tiny country of Gambia.

‘This is a sad situation. But everything comes from God. Tragedies always happen, we just thank Allah that we can all come together,’ said Haji Dukuray, the uncle of Haja Dukuray, who died with three of her children and her husband.

‘One week they were with us … now they’re gone,’ said Musa Kabba, the imam at the Masjid-Ur-Rahmah mosque, where many of the deceased had prayed. 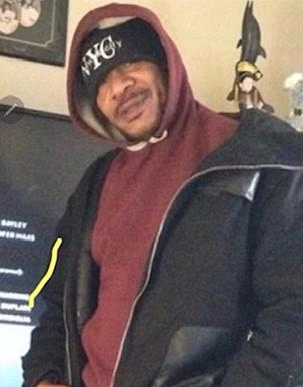 Bronx fire victim Felix Martinez is currently clinging to life on a ventilator. A class action lawsuit filed on his behalf seeks $3 billion from the building’s owners

Meanwhile, the owners of the Bronx apartment building are being sued for $3 billion by at least 22 people who suffered ‘pain, shock and mental anguish’ in the horrific fire, according to a new filing.

Rosa Reyes and Felix Martinez, who are married, were first to be represented in a class-action suit against the owners of 333 East 181 Street, where a space heater sparked the city’s deadliest fire in decades on Sunday.

Martinez is currently clinging to life on a ventilator after getting lost in a darkened stairwell and being overcome by smoke, his lawyer said.

As of last week, 20 others had joined the lawsuit after a preliminary investigation revealed a ‘maintenance issue’ might have prevented the fire from being contained to the original third-floor unit.

City inspectors cited the Bronx high-rise at least six times for failing to maintain self-closing doors in the complex.

Residents of 333 East 181st Street have complained of lack of heat and malfunctions with their self-closing doors, which fire investigators said contributed to the spread of toxic smoke throughout complex.

City inspectors cited the Bronx high-rise at least six times between 2013 and 2019 for failing to maintain self-closing doors in the complex. There was also a self-closing door complaint issued on Dec. 6, 2021 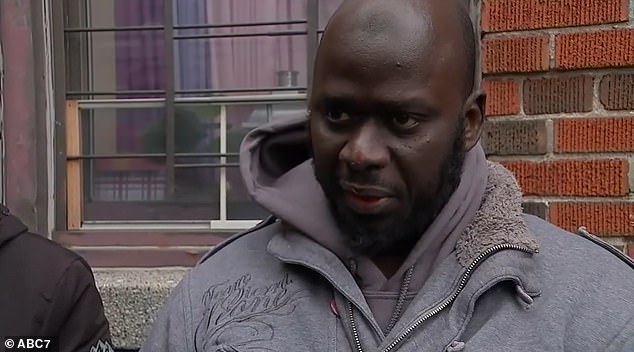 Mamadou Wague (pictured), who rushed to flee with his wife and eight kids after a fire broke out in his duplex apartment on Sunday, said the doors in his unit – which are designed to close automatically – get stuck if pushed open too far

Mamadou Wague, who rushed to flee with his wife and eight kids after a fire broke out in his third-floor duplex apartment on Sunday, said the doors in his unit – which are designed to close automatically – get stuck if pushed open too far.

‘When you push the door all the way to the edge, it didn’t close by itself,’ the West African immigrant father-of-eight told the Post. ‘I actually thought later that the door had shut, but the fire department people told me it had stayed open.’

One list of complaints against the property from the last month detailed how residents complained about not having any heat.

Although building officials state the complex was heated, the minimum temperature requirement in NYC is only 68 degrees Fahrenheit, which some residents claims is too cold.