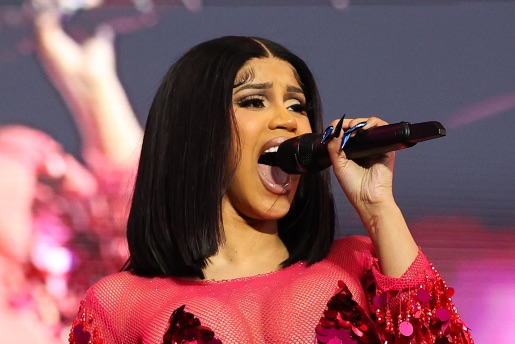 
Cardi B served up two major silver-centric looks on her Instagram yesterday. The rapper showed off her dance moves and posed for the cameras, dressed in black and daring denim, which she paired with two unmistakeable pairs of designer boots.

Cardi brought the Bronx to her home in Atlanta, the “Up” songstress swaying and mouthing the words to the beat of a song in the background dressed in a full-coverage black bodysuit. The one-piece was dripped out, the New York native clad in multiple layered diamond chains, diamond studs and bracelets that reflected light in an appealing way.

Much like her outfit, Cardi’s hair was also a sight to behold, featuring white roots transitioning into gray curled ends that offered a stark contrast.  Cardi’s shiny digs were coupled with sparkling silver Givenchy Shark Lock boots in a reflective chrome, the 29-year-old shining right down to her toes.

The star’s second look saw the performer dressed in a risky black distressed crop top and high-waisted dark wash denim shorts that were also weathered with holes and rugged hems. Cardi carried a silver chain Balenciaga Cagole bag and popped on chunky reflective shades that took up most of the mom of two’s features. The Reebok brand ambassador accessorized once again with stacked silver chains and wore longer ombre locks with black ends, the style deeply parted to one side.

The lyricist coordinated her Balenciaga pieces, stepping into Cagole boots in a lustrous hue fitted with pointed toes, silver studs and tassels that gave the knee-high boots dimension and visual interest. Seen on the likes of Kim Kardashian and Dua Lipa, these Balenciaga boots have had their moment in the sun, and for good reason. The sleek style comes in alternative shades and boasts that sought-after Y2K, punk-rock style.

PHOTOS: Take a look at Cardi B’s most impressive shoe styles over the years.