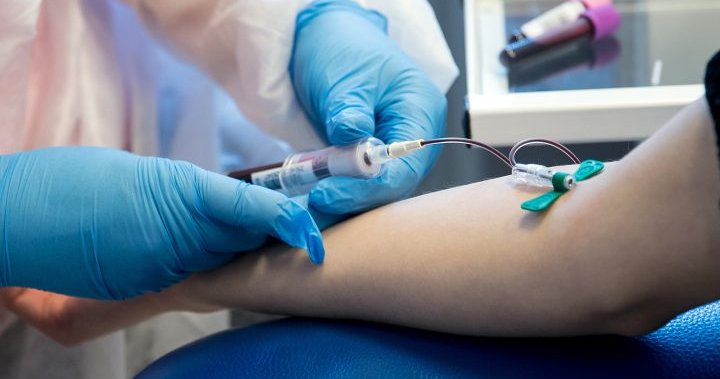 
Canadian Blood Services (CBS) has expanded the eligibility for some men who have sex with men to donate plasma at its Calgary and London, Ont., donation clinics.

In these two cities, gay, bisexual and other men who have sex with men can donate plasma — the yellowish liquid in which blood cells are suspended — if they have not had a new sexual partner in the last three months, and their current sexual partner has not had sex with anyone else in that time, CBS said in a release Tuesday.

Read more:
Agency to request end to blood donation ban for men who have sex with men this year

This is slightly more permissive than the current guidelines for blood donation. Under those, men are only able to donate blood if their last sexual contact with a man was more than three months previously.

The locations were chosen because they can accept plasma donations, which not all clinics do, and because of existing relationships between Canadian Blood Services and local LGBTQ2 organizations in those regions, a CBS spokesperson told Global News.

Canadian Blood Services describes this as “a step forward” toward more inclusive donations. The organization has previously promised that they will request that Health Canada remove the waiting period for men who have sex with men and move to behaviour-based screening for all donors by the end of the year.

The new plasma donation process for this group of donors isn’t straightforward. Canadian Blood Services says it is required by Health Canada to impose a 60-day hold on all plasma donations from men who have sex with men.

What this means is that a new donor who passes screening will leave a plasma donation at the clinic. This sample will be tested for a variety of blood-borne diseases including syphilis, Hepatitis B and C, and HIV. Then, at least 60 days later, he may return to provide a second donation. At that time, if the second donation also tests negative, both plasma samples will be sent along for processing and to be turned into products that can be used by hospitals.

Each subsequent donation by this man will then be subject to a 60-day hold before being released for use, Canadian Blood Services spokesperson Catherine Lewis told Global News.

Plasma was specifically chosen for this program because it’s easier to expand donor eligibility under the current rules, she said.

“Source plasma is used to make medications,” she wrote in an emailed statement. “The manufacturing process for these medications involves complex steps that are applied to a large pool of plasma donations, and in this process potential pathogens in the plasma are eliminated.

“This added safety process and our ability to freeze and hold plasma for up to a year makes it possible to expand plasma donation eligibility sooner than we can for other blood products.”

However, she said, Canadian Blood Services does not view this program as a pilot project, since it hopes that the donation rules will soon change so that this process becomes unnecessary. First, the organization has to prove that this is safe.

Canada’s blood donation eligibility continues to remain a contentious issue, with critics and opposition members pressing the government to deliver on its longstanding promise of reversing the restrictions.

The deferral period has been shortened three times over the past eight years. Prior to 2013, there was a lifetime ban.

Nathan Lachowsky, associate professor at the School of Public Health and Social Policy at the University of Victoria, welcomed the change but said more work needs to be done to move towards a “gender-neutral approach”.

“Although the change … is positive and promising, it still continues to perpetuate a system that treats men who have sex with men differently than the rest of the population,” he told Global News.

According to the most recent data from Health Canada, gay, bisexual and other men who have sex with men represented 49.5 per cent of all new HIV infections in 2018, despite representing approximately three-to-four per cent of the Canadian adult male population.

Allowing men who have sex with men in Calgary and London to donate plasma gives CBS an opportunity to collect data on these new donors that can help affirm future changes, Lachowsky said.

“What we know from decades of HIV research is what specific behaviours are most likely to pass HIV and we know that the majority of gay men will not acquire HIV,” he added.

“So this is a step towards allowing more safe donors to participate in the blood system. “

Various countries have dropped or changed their screening criteria for blood donation in recent years, including Italy, Portugal and Mexico.

In June, the United Kingdom implemented a behaviour-based policy that will allow gay, bisexual and MSM to be able to donate blood, plasma and platelets without a deferral period.

Instead, the policy in the U.K. sees all donors, regardless of sexual orientation, asked if they had sex and, if so, about recent sexual behaviours. People who have had the same sexual partner for at least three months are able to donate, no matter their orientation.

Canadian Blood Services would not say what precisely their new screening criteria will be, but is promising to make their submission by the end of the year.

“Our goal is to remove the current waiting period specific to men who have sex with men and use sexual behaviour-based screening for all donors, in all our locations and for all blood products,” Lewis said.