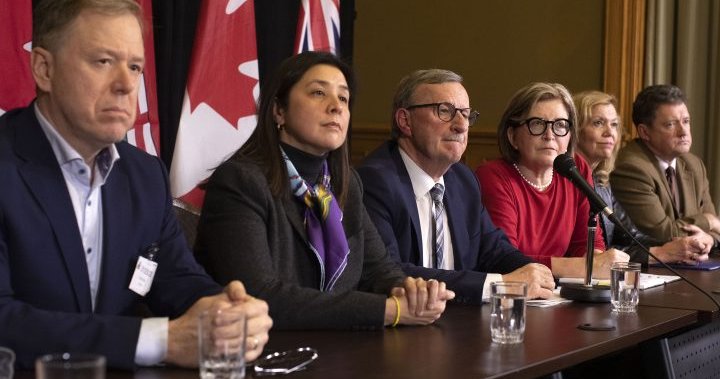 
It was two years ago today, on Jan. 25, 2020, that Canada’s first “presumptive” case of what would later be called COVID-19 was reported in Toronto.

It involved a man in his 50s who had recently travelled to Wuhan, China — the epicentre of the outbreak at the time.

The man was being treated at Toronto’s Sunnybrook Hospital and his condition was reported to be stable, officials said.

The case was later confirmed through secondary testing and it marked the beginning of an unprecedented period in Ontario and Canada as a whole.

News of the first “presumptive” case broke late on a Saturday afternoon.

A hastily organized press conference with health officials was held not long after at Queen’s Park in downtown Toronto.

The officials sat crammed together as they said that the risk to the public as a whole was low.

“Ontarians can rest assured that the province’s integrated health-care system today is far more prepared to respond to any potential health risks than in the past,” Elliott said at the time.

Yaffe said that the virus was not easily transmitted between individuals.

“While we now have one presumptive confirmed case, our health officials are clear that the risk to residents continues to remain low,” Toronto Mayor John Tory said in a statement.

Of course, since then science has evolved and so too has the understanding of the virus.

Ontario’s first lockdown didn’t come until March 2020, when it became clear that the virus was spreading in the community and at a time when regions around the world imposed sweeping, unprecedented measures in a bid to contain its spread.

The province’s health-care system has come under immense strain several times since then.

On Monday, Ontario surpassed the grim milestone of more than 11,000 COVID-related deaths, with thousands of those victims in long-term care.

There have also been more than one million lab-confirmed cases of the virus in the province, though that is an underestimation due to limits on testing.

In Canada as a whole, there have been nearly three million confirmed COVID-19 cases and more than 32,700 virus-related deaths.

Worldwide, there have been more than 355,000,000 confirmed cases and more than 5.6 million COVID-related deaths, according to Johns Hopkins University.

“The first Toronto case of a largely unknown and deadly virus was reported in Toronto exactly two years ago today,” Tory said at a press conference Tuesday.

“Since that day two years ago, every element of what has come to be known as Team Toronto, led by the people of Toronto themselves, that team has worked non-stop together and effectively, and including together with the other governments, to handle an often rapidly changing health crisis as well as anywhere in the world, much as we know there is lots left for us to do. Top of the list: Team Toronto has worked non-stop to help residents get vaccinated.”

The vaccine rollout has no doubt saved countless lives and prevented severe illness throughout the world even as new variants emerged.

5:19
Ontario’s Omicron wave may have peaked, according to experts

Ontario’s Omicron wave may have peaked, according to experts

Even with that, however, COVID continues to pose challenges and it’s not clear when this will all come to an end and when life will fully get back to what it was like pre-2020.

“We are in a much better position to fight the spread of COVID-19 than we were two years ago,” she said.

“We have safe and effective vaccines. We know that measures like masking, physical distancing, increasing ventilation, reducing our contacts and staying home when we’re sick all help to reduce the transmission of COVID-19.”

De Villa also noted that despite record case counts in recent weeks, “we are seeing less severe outcomes, especially amongst those who’ve had three doses of COVID-19 vaccine.”