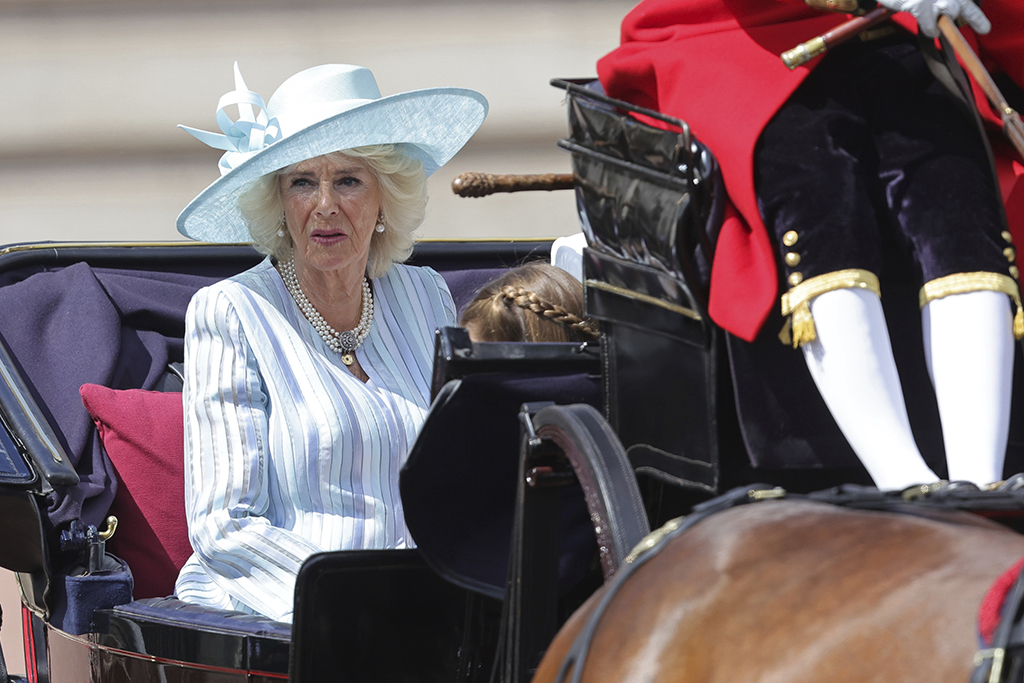 Camilla made an elegant arrival at the Trooping the Color in London today. The Duchess of Cornwall is kicking off the first of a four-day celebration to mark the Platinum Jubilee, which celebrates Queen Elizabeth II 70 years of service to the people of the United Kingdom, the Realms and the Commonwealth.

Camilla appeared on a horse-drawn carriage alongside Kate Middleton and her three children: Prince George, Princess Charlotte and Prince Louis. The 74-year-old royal looked sophisticated and refined by stepping out in a blue striped ensemble. The top of her outfit featured long sleeves and structured shoulder pads.

Camilla exuded glamour by completing her look with a light blue hat that featured a wide brim and was decorated with a bow on the side. She continued to accessorize with an array of pearls including, layered necklaces and earrings. The angle of the photos didn’t allow for a peak at her footwear choice, but it would be no surprise if she slipped into a pair of pointed-toe pumps. The wife of Charles, Prince of Wales, tends to gravitate towards a variety of pointy silhouettes.

The Queen’s Platinum Jubilee celebrates Queen Elizabeth II’s unprecedented 70-year reign over the United Kingdom and associated Commonwealths. The Queen is the first British Monarch to achieve a Platinum Jubilee following seven decades of service to the throne, longer than any other British royal in history. The Platinum Jubilee, which runs from June 2 to June 5, is a four-day bank holiday that will include celebrations all over the U.K., including parades, performances, and other public gatherings.