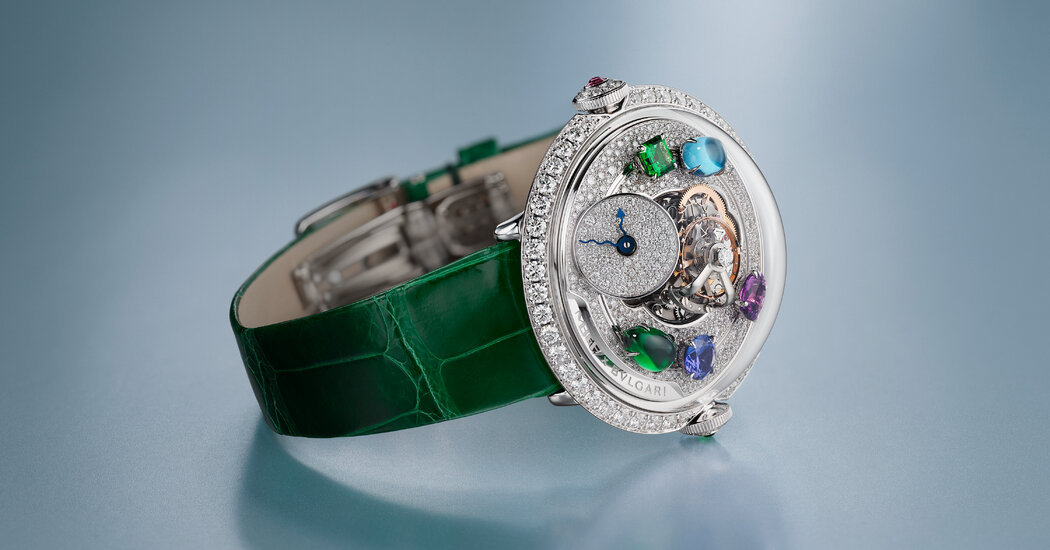 
Watch fans feeling jaded by the avalanche of recent design collaborations may be intrigued by a new women’s watch, the product of an unusual pairing.

Created in 2019, the Legacy Machine FlyingT featured a vertically stacked, tower-like movement, and came with a dial inclined at 50 degrees, topped with a tourbillon and domed crystal glass.

The movement of the MB&F watch is 17 millimeters, or about 0.7 inches, deep. At Bulgari, “we don’t have this kind of thickness in terms of movement,” he said. “So putting huge stones inside was a dream.”

From his own house’s collection, he was inspired by the Allegra, which features oversize faceted and cabochon gems, including diamonds, citrines and amethysts, which appear to have been placed at random on the bezel.

None of the watch’s mechanics were changed, said Maximilian Büsser, MB&F’s founder and creative director. But to place five colored stones — from about 0.39 carats to 0.70 carats each — on the movement, everything else was: Mr. Buonamassa Stigliani’s specs included a redesigned baseplate capable of accommodating the gems, and a dial for the diamonds.

But it was the reconfigured lugs — which had to be shortened and almost hidden beneath the redesigned case — that resonated most with Mr. Büsser.

“We had lugs which were much longer and were integrated into a case,” he said. “Fabrizio wanted bigger stones on the bezel, so basically redesigned completely the case.”

Mr. Buonamassa Stigliani, who called the final design a “jewelry spaceship,” said, “I didn’t want to see the lugs because the watch had to look like it was suspended on your wrist — that all you see is the stones turning around this amazing movement.”

It was Mr. Buonamassa Stigliani, Mr. Büsser said, who “created the idea of planets circulating around, and from the side it looks like a spaceship. I didn’t know if he did it on purpose, but Fabrizio came into our world.”

(Mr. Büsser said he had long admired the Italian house and, in the 1990s when he was working for Jaeger-LeCoultre, he owned the Bulgari Eccentrica Pen, wore the house perfume and became obsessed with the fashionable Bulgari Diagono Scuba watch. “I was the Bulgari fan boy,” he recalled.)

The Legacy Machine FlyingT Allegra comes in white and red gold versions, each limited to 20 pieces ($185,000).