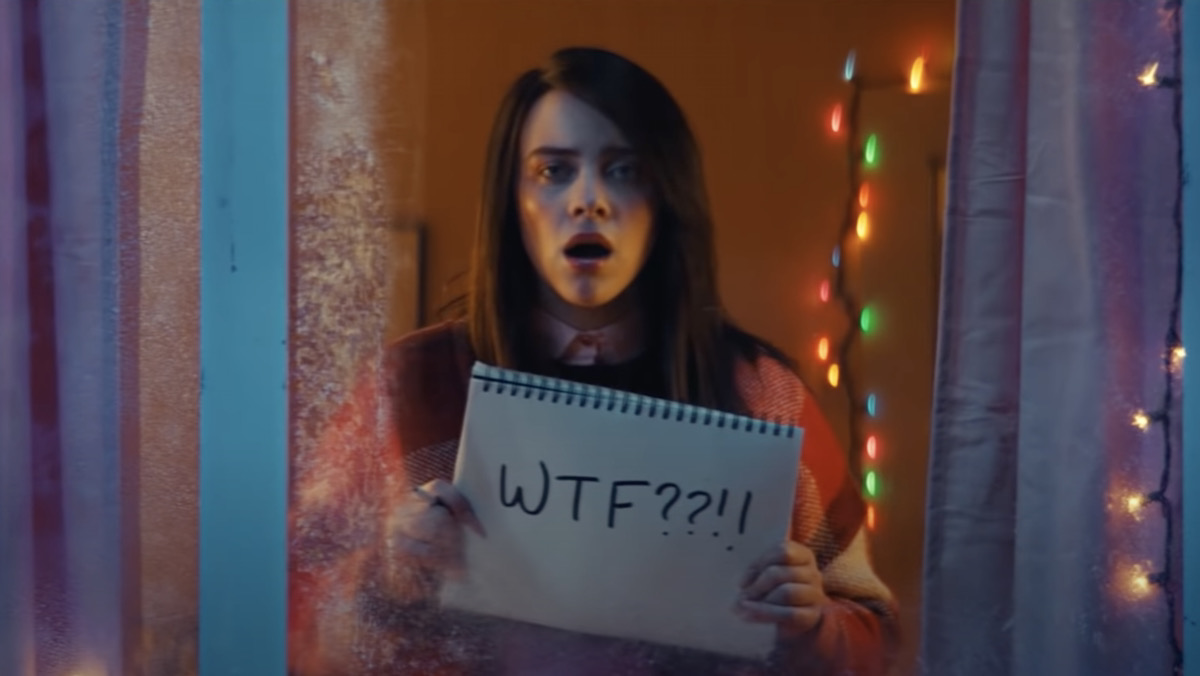 Billie Eilish went through a minor but impressive pop-culture rite of passage this weekend on Saturday Night Live: After appearing as musical guest in September 2019, she returned to the show for double duty, hosting and serving as musical guest. This isn’t exclusively the specialty of young, female pop stars—Justin Timberlake has famously done it, as have Mick Jagger, Paul Simon, and a bunch of others—but it does feel like a particular proving ground for that demo, especially in the past decade-plus. Double-duty gals have included Taylor Swift, Britney Spears, Lady Gaga, Ariana Grande, and Miley Cyrus, who (like Britney) has done a double-double, with two separate host/guest stints. (Cyrus must have been on hand to advise Eilish; she actually appeared in a sketch before Eilish herself did.)

Though Eilish is undeniably popular, she approached the SNL gig from a somewhat different vantage than Cyrus or Grande or Swift, whose images very much project a desire for J.Lo-style multihyphenation. Eilish, by contrast, jokingly noted in her monologue that she was not encouraged to act, despite her family’s interest in it. So how did this rawer, more confessional movie star fare in her sketch-comedy debut? Here are some of her best performances from this week’s episode—musical and otherwise.

This season, SNL has quietly been working with its hosts to craft more personal and less gimmicky monologues, where the non-comedian hosts (which is to say, the majority of them) can crack a few Friar’s Club Roast Lite jokes amidst a quick look at who they actually are as people—something a little more polished than a chat-show anecdote but a little looser and funnier than other press ops, without the pressure of asking them to sing, or field questions from the audience. Eilish was a good fit for that format, coming out an a dress that she likened to “Mrs. Claus going to the club” or someone “getting married in an anime,” and explaining that her trademark baggy outfits were the result of her being “two kids stacked on top of each other trying to sneak into an R-rated movie.” She mixed in some Fun Facts (her birthday is in a week! Other members of her family enjoy acting!) and pivoted into an earnest speech about self-acceptance.

Many of this season’s more memorable SNL sketches have emphasized relatability (think of that tour-de-force about the pain of canceling cable)—sometimes in an elbow-in-the-ribs sort of way. This anthology of quick-hit characters populating a couple’s fridge full of holiday cards leaned a little too heavily on that quasi-familiarity, but it was a chance for a bunch of the cast to do zippy commentaries on certain personality types. This was also where Miley Cyrus appeared before Eilish, who was a little halting as a former high school mean girl who… actually pretty much is still a high school mean girl. Not a particularly auspicious performance, but a spirited one.

Following the similarly quick-hit Christmas cards bit, this rapid-fire scroll through a bunch of TikTok parodies felt like something out of the at-home episodes from Spring 2020—in a good way. Eilish was again eased into the show, appearing a few seconds at a time in a running gag as a nurse doing coordinated dances and possibly neglecting her patients. Of the evening’s two sketches that assigned Eilish primarily to gyrate, this was funnier than the Hip-Hop Nativity bit.