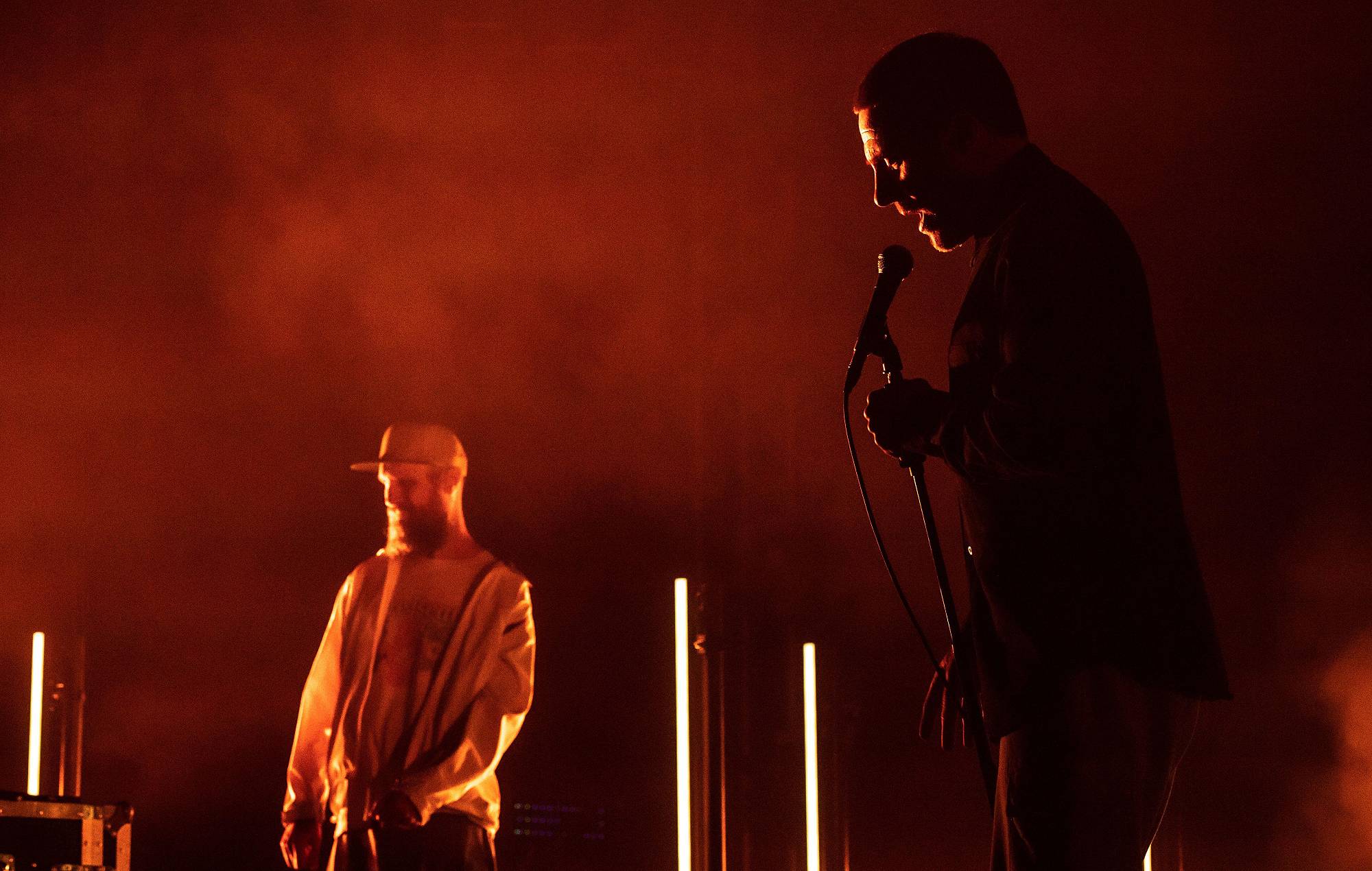 
“Are you enjoying it, Notts?” barks Sleaford Mods frontman Jason Williamson to a hollering hometown crowd. “Not gonna come up to me next week and say it was shit? You better not. I’m pretty hard these days.”

You’ve been warned. Don’t mess about. They may be an area band now, but the Mods are still the same no-holds-barred, no-nonsense affair who first played under this guise in a tiny arts cafe around the corner near the train station back in 2007. Through their 11 albums – culminating in 2021’s utterly triumphant ‘Spare Ribs‘ – Williamson and producer/multi-instrumentalist Andrew Fearn’s assault of hip-hop beats and gutter poetry has seen then become one of the UK’s most revered cult offerings, but even the most devout fan would have spat their Tyskie out if you’d said they’d ever be playing a room of this size.

The sense of occasion and scale isn’t lost on the duo. “It’s like a fucking aircraft hanger innit?” snarls Williamson at one point. It is, but they manage to make tonight feel like the dank and rowdy punk basement show you’d expect from them. The lights dim and they duo arrive to open with the subtle electro of ‘Fishcakes’, a fittingly tender ode to making the most of humble beginnings as Williamson chimes: “And when it mattered, and it always did, at least we lived”. After that – it’s all-out war.

‘Shortcummings’ follows, erupting far more on stage than it does on record as the crowd rave along in their shared rage against the Prime Minister’s former advisor, Dominic Cummings. “Who gives a shit about you now, you slap-headed cunt?” spits Williamson, as much the master of ceremonies as he is angry man down the pub. You can tell he feels at home, stomping his ground and twirling his mic stand to fill the stage. Credit is also of course due to Fearn, whose joy is infectious as he skips and dad-dances throughout – losing himself in the cyborg dance-punk world he’s created and the sight of thousands of locals totally having it.

It’s a set without relent, but the highlights come with the snotty and bilious ‘I Don’t Rate You’, the new-wave dystopian rave of ‘Kebab Spider’, the runaway rant of ‘Jolly Fucker’ and the daft abandon of ‘TCR’. Then come the words we never thought we’d hear Williamson say: “This is a song by a band called Yazoo. This is ‘Don’t Go’.” Yes, really – and it’s far more fun than we’d care to admit.

There are some guest turns too. Support act and collaborator Billy Nomates gets a hero’s welcome when she returns to the stage to add some more Midlands cool to ‘Mork N Mindy’, and there’s a surprise appearance from Aussie punk Amyl & The Sniffers’ Amy Taylor, who tears Nottingham a new one as she invites everyone to “GET ROWDY!” with her on ‘Nudge It’. Naturally, the anthemic ‘Tied Up In Nottz’ resonates the most, bringing the room together with all of its R-rated honesty (“The smell of piss is so strong / It smells like decent bacon”), and the feral reaction for closers ‘Jobseeker’ and ‘Tweet Tweet Tweet’ is what arenas were built for – from a band supposedly not built for arenas.

The Mods’ live show is a bewildering joy from start finish, and the key factor is that you’ve never seen anything like it. Don’t waste time trying to compare it to anything else. “Life’s too fucking short,” ends Williamson. “We are the Sleaford Mods”. It is what it is: real life, loud, made in Nottingham.