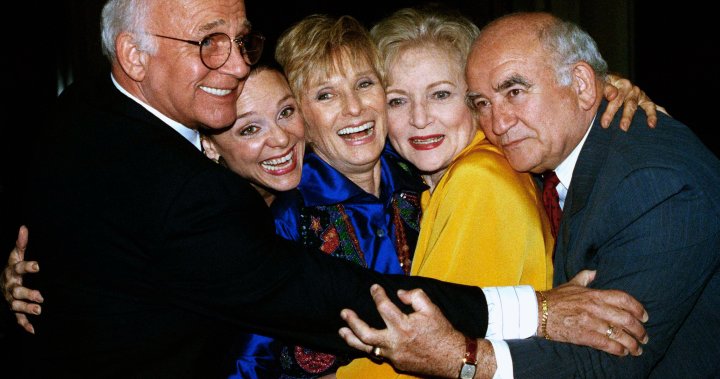 
Celebrity reactions poured in after beloved Hollywood star Betty White died on Friday at age 99, weeks away from her 100th birthday.

Comedians old and young remembered the Golden Girls star, having worked alongside her or been inspired by her pioneering comedy.

Comedian Steve Martin remembers a time in 1974 when he bumped into White before doing an opening set at a club in Los Angeles, only to find out she was there to see him, not the main act, Linda Ronstadt.

Comedian Seth Myers recalled that White was the only Saturday Night Live host he ever saw receive a standing ovation at the show’s afterparty.

“A party at which she ordered a vodka and a hotdog and stayed till the bitter end,” he tweeted.

RIP Betty White, the only SNL host I ever saw get a standing ovation at the after party. A party at which she ordered a vodka and a hotdog and stayed til the bitter end.

White hosted SNL on May 8, 2010, with musical guest Jay-Z. At 88, she was the oldest actress to ever host the show at the time.

“The world looks different now,” he said. “She was great at defying expectation. She managed to grow very old and somehow, not old enough.”

The world looks different now. She was great at defying expectation. She managed to grow very old and somehow, not old enough. We’ll miss you, Betty. Now you know the secret. pic.twitter.com/uevwerjobS

Reynolds had been exchanging jokes with White only a day earlier. The two co-starred in the 2009 comedy The Proposal and over a decade later, told People magazine that he still “can’t get over his thing for me.”

A small but growing memorial at Hollywood’s Walk of Fame has already begun to form at White’s star, one reporter tweeted.

Comedian Kathy Griffin remembered how supportive White was when she met her.

“She treated me like we were in the same club or something,” she tweeted. “She actually treated me like an equal in the comedy gurrrl world … there will only be one Betty White.”

7) …and no matter how long this world continues to spin, there will be only one Betty White.

Comedian Andy Richter had come into contact with White in 2010 when she was a guest on the game show Pyramid, which he hosted.

“The only thing she asked for all day was two bean and cheese burritos from Taco Bell,” he tweeted.

I hosted one of the many attempted reboots of the Pyramid game show in 2010 and Betty was a celebrity guest. The only thing she asked for all day was two bean and cheese burritos from Taco Bell. https://t.co/VZTcT2BQCm

White influenced many in the entertainment business, especially women, through her television career that spanned more than 60 years.

Writer Nancy Meyers, known for romantic comedies such as the film Something’s Got to Give, said on Instagram that White “changed her life.”

“She was the first person who made me believe I could be a writer,” she wrote. “What an enormous thing to do for another person. I bet there’s hundreds of us who she helped over the years.”

Actress Reese Witherspoon is another who was inspired by White, tweeting that she “loved watching her characters that brought so much joy.”

“Thank you, Betty, for making us all laugh!”

So sad to hear about Betty White passing. I loved watching her characters that brought so much joy. Thank you, Betty, for making us all laugh! https://t.co/iOkmHLrW21