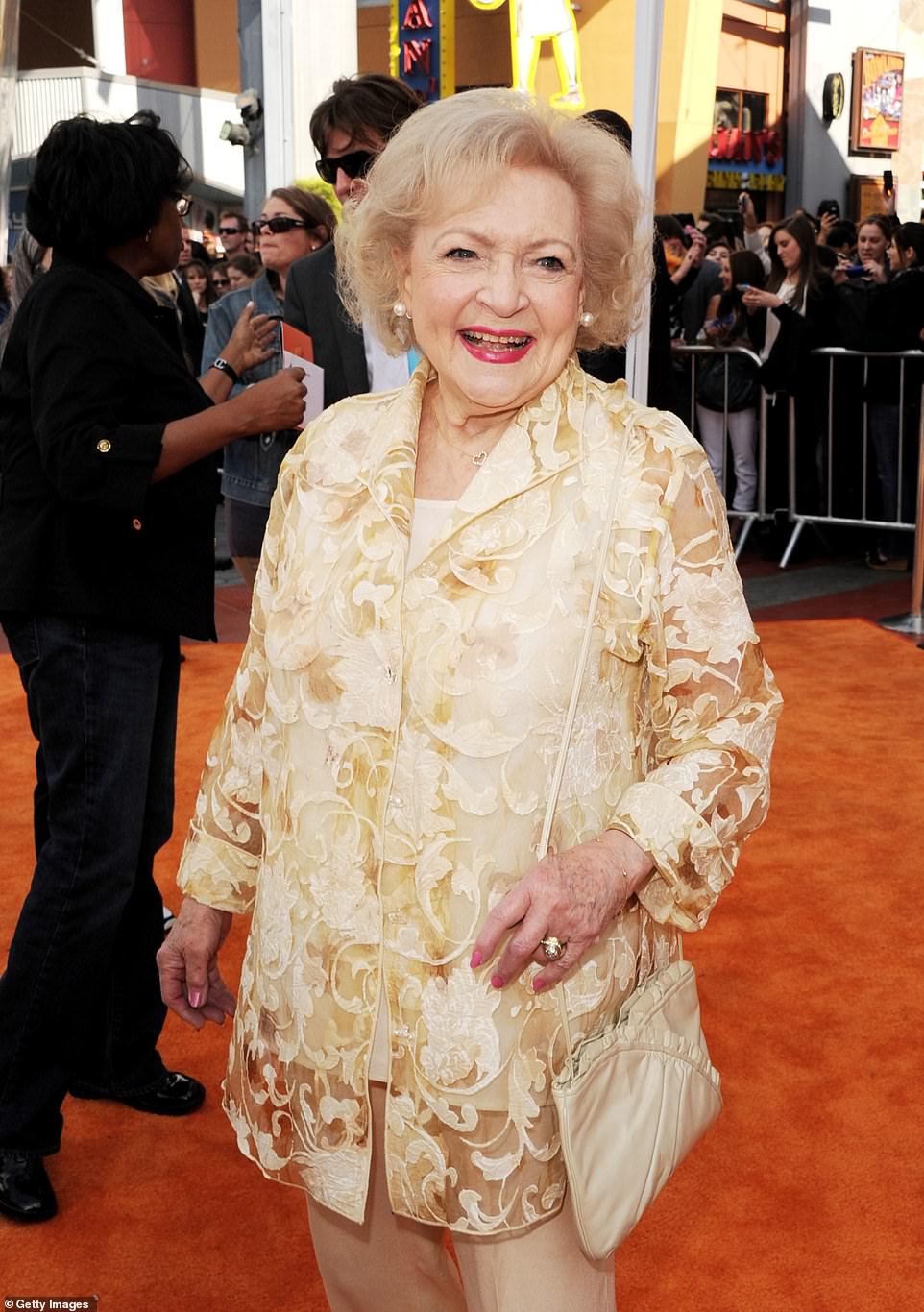 
Beloved Golden Girls star Betty White has passed away at the age of 99, just three weeks before her milestone 100th birthday.

White, who capped a career of more than 80 years by becoming America’s sweetheart after Emmy-winning roles on television sitcoms, is said to have passed away of natural causes at her home on Friday morning, law enforcement confirmed.

She was not battling an particular ailments and did not have a sudden illness, a source close to the star told TMZ.

In fact, just a few days ago – in an interview about her upcoming centennial year – White said she was ‘so lucky to be in such good health and feel so good at this age’.

White was last seen in public running errands with her driver just the day before her birthday 98th birthday. She was seen sporting a turquoise floral blouse, matching pants and tiny black heels and flashed a smile for the camera as she wore a bold red lip.

Shortly after, she began limiting contact with others to avoid contracting COVID-19. Last year, when the virus first surged, she said she was ‘relaxing through her quarantine’ at her residence in Los Angeles.

The star’s essential errands, like groceries, were being taken care of for her so she wouldn’t have to leave her house. Additionally, she was ‘only coming in contact with people being equally cautious of the virus’ and respected her state’s stay-at-home orders.

She leaves behind a massive legacy as a comedienne, actress, author, animal rights activist and one of the first female pioneers in television.

‘Even though Betty was about to be 100, I thought she would live forever,’ her agent and close friend Jeff Witjas said in a statement issued to People.

‘I will miss her terribly and so will the animal world that she loved so much. I don’t think Betty ever feared passing because she always wanted to be with her most beloved husband Allen Ludden. She believed she would be with him again.’

White was known for her optimism and positivity. On her 96th birthday she credited ‘vodka and hot dogs’ for her longevity and added that trips up and down the stairs of her two-story house kept her in shape. Most importantly, she said: ‘It’s your outlook on life that counts. If you take yourself lightly and don’t take yourself too seriously, pretty soon you can find the humor in our everyday lives.’

When she was awarded the Guinness World Record for longest TV career for a female entertainer in 2014, she said: ‘I have no regrets at all. None. I consider myself to be the luckiest old broad on two feet.’

White was born in Oak Park, Illinois on January 17, 1922. Her legal name, ‘Betty’ is not a shortened version of ‘Elizabeth’ because her parents did not want their daughter saddled by any derivatives and nicknames like Beth, Liza and Ellie.

White was an only child and liked it that way, she remembers her blissfully happy childhood as ‘spoiled rotten, but taught to appreciate it.’

Her family moved to Los Angeles in 1923 when she was just over a year old. She attended Beverly Hills High School and though she was interested in theater she said, her dream was to become a zookeeper or forest ranger. ‘The problem was, back then a girl wasn’t allowed to be either one,’ she wrote in her autobiography.

She started her entertainment career in radio in the late 1930s and by 1939 had made her TV debut singing on an experimental channel in Los Angeles.

After serving in the American Women’s Voluntary Service, which helped the US effort during World War Two, she was a regular on Hollywood on Television, a daily five-hour live variety show, in 1949. 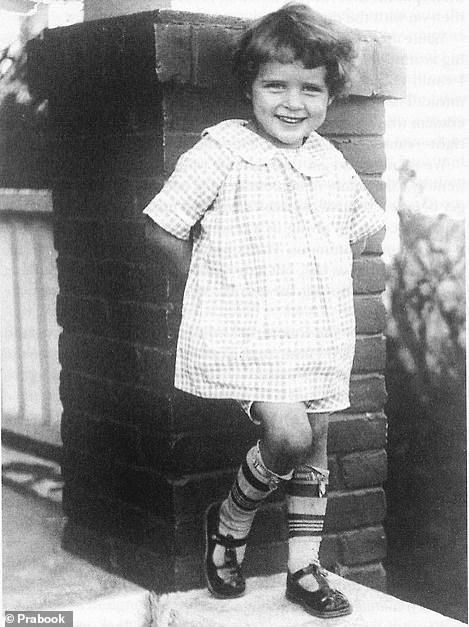 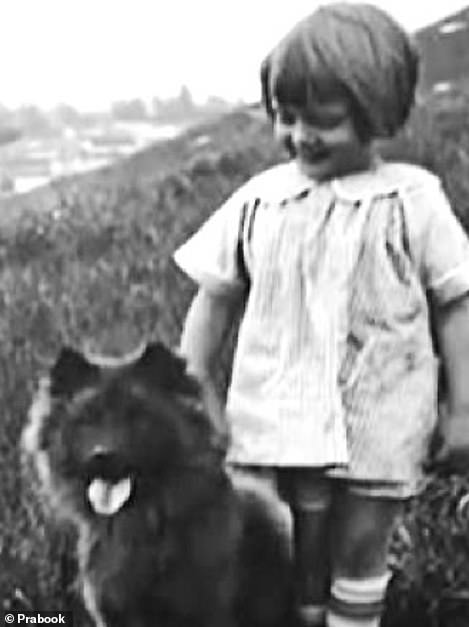 Born as an only child in 1922, Betty White’s family moved to Los Angeles when she was just an infant. Her passion for animals began as a child when her father built radios during the Great Depression to make extra money. Nobody had money for the radios so he would often trade them for other goods, including dogs. At one point, the Whites owned up to 15 ‘well-loved’ dogs. Above, Betty poses with her beloved Chow 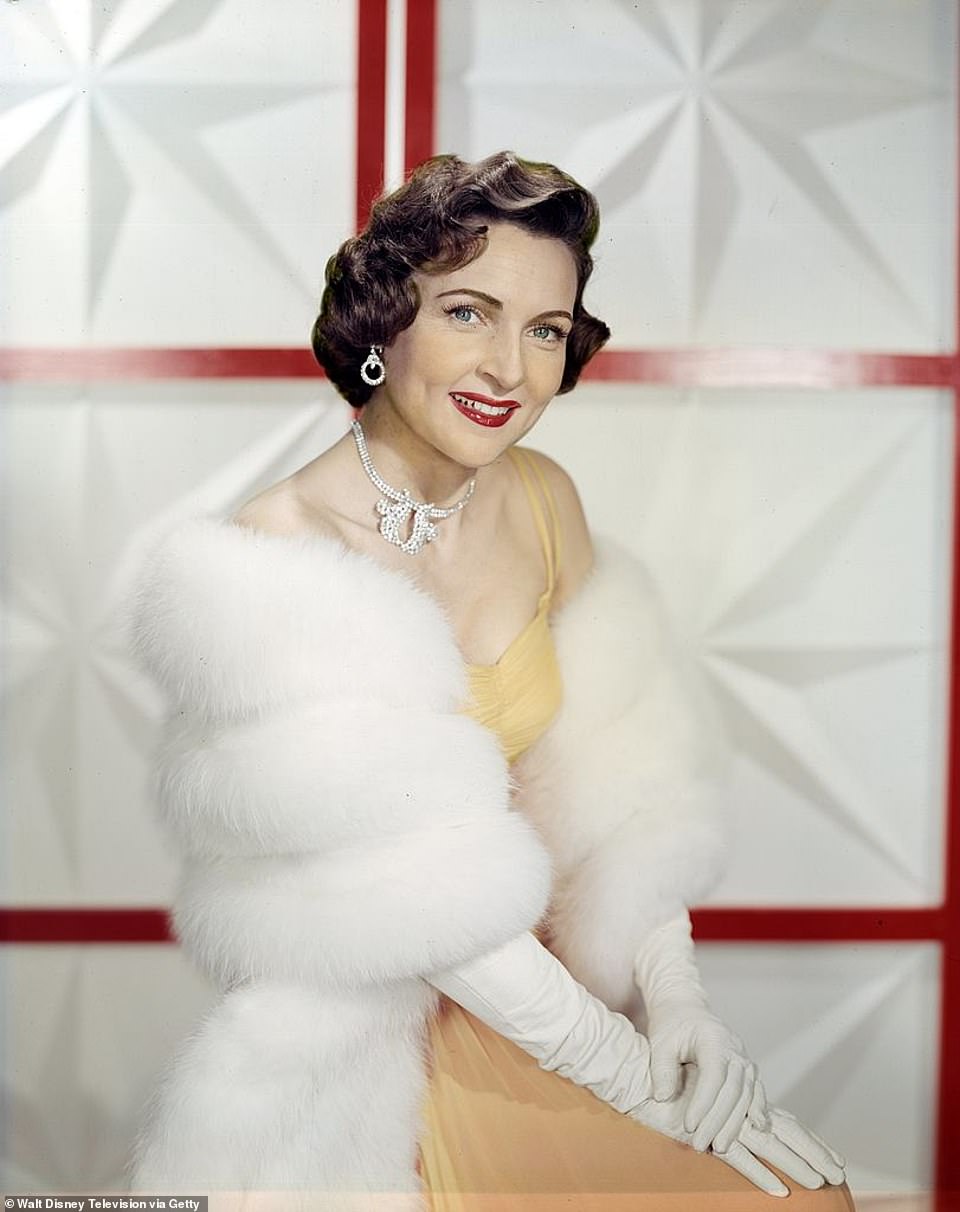 A promotional photo from Betty White’s 1957 sitcom, Date With the Angels. After graduating high school, White made her rounds at movie studios but was told that she was too ‘unphotogenic’ for the silver screen. Alternatively, she picked up odd jobs in radio reading commercials, playing bit parts and sometimes as a background ‘noisemaker’ in the crowd

A few years later she became a pioneering woman in television by co-founding a production company and serving as a co-creator, producer and star of the 1950s sitcom Life With Elizabeth.

Through the 1960s and early ’70s White was seen regularly on television, hosting coverage of the annual Tournament of Rose Parade and appearing on game shows such as Match Game and Password. She married Password host Allen Ludden, her third and final husband, in 1963. 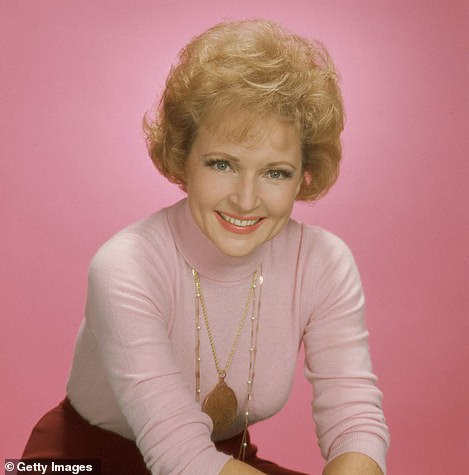 Betty White poses in a publicity portrait for her part in The Mary Tyler Moore Show. She wrote in her autobiography: ”For me, humor is about rhythm. It’s like an ear for music. It’s hard to explain’

White reached a new level of success on The Mary Tyler Moore Show, playing the host of a home-making television show, the snide, lusty Sue Ann Nivens, whose credo was ‘a woman who does a good job in the kitchen is sure to reap her rewards in other parts of the house.’ White won best-supporting actress Emmys for the role in 1975 and 1976.

She won another Emmy in 1986 for The Golden Girls, a sitcom about four older women living together in Miami that featured an age demographic rarely highlighted on American television.

White also was nominated for an Emmy six other times for her portrayal of the widowed Rose Nylund, a sweet, naive and ditzy Midwesterner, on the show, which ran from 1985 to 1992 and was one of the top-rated series of its time.

After a less successful sequel to The Golden Girls came a series of small movie parts, talk-show appearances and one-off television roles, including one that won her an Emmy for a guest appearance on The John Larroquette Show.

By 2009 she was becoming ubiquitous with more frequent television appearances and a role in the Sandra Bullock film The Proposal. She starred in a popular Snickers candy commercial that aired during the Super Bowl, taking a brutal hit in a mud puddle in a football game. 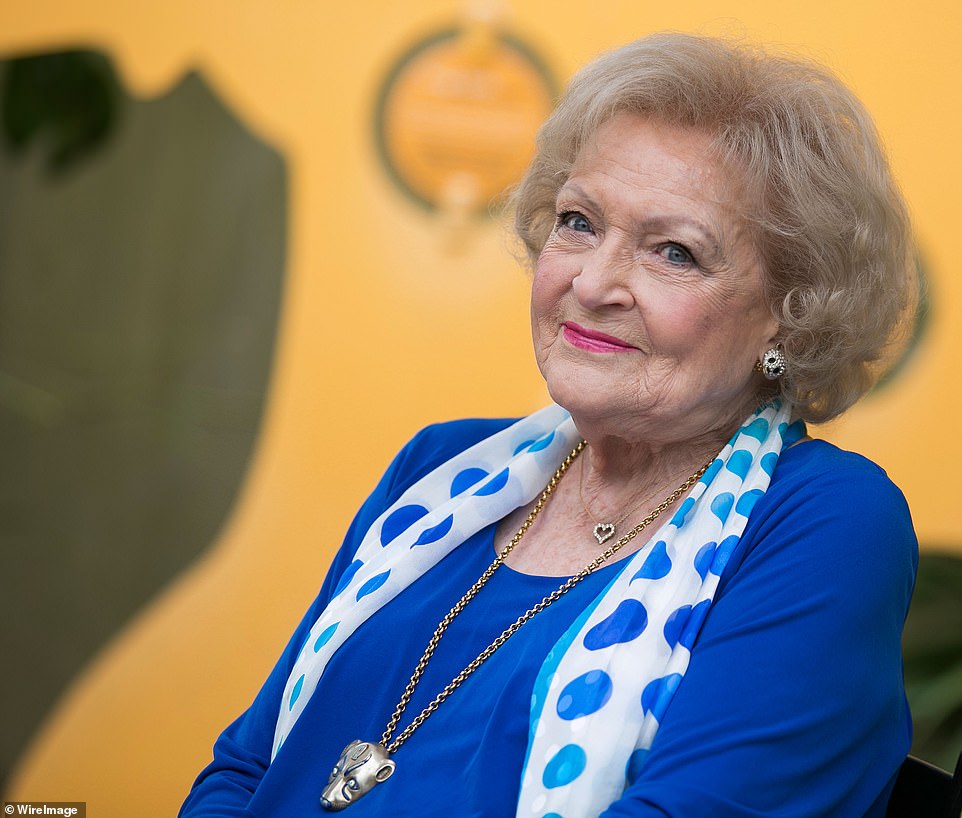 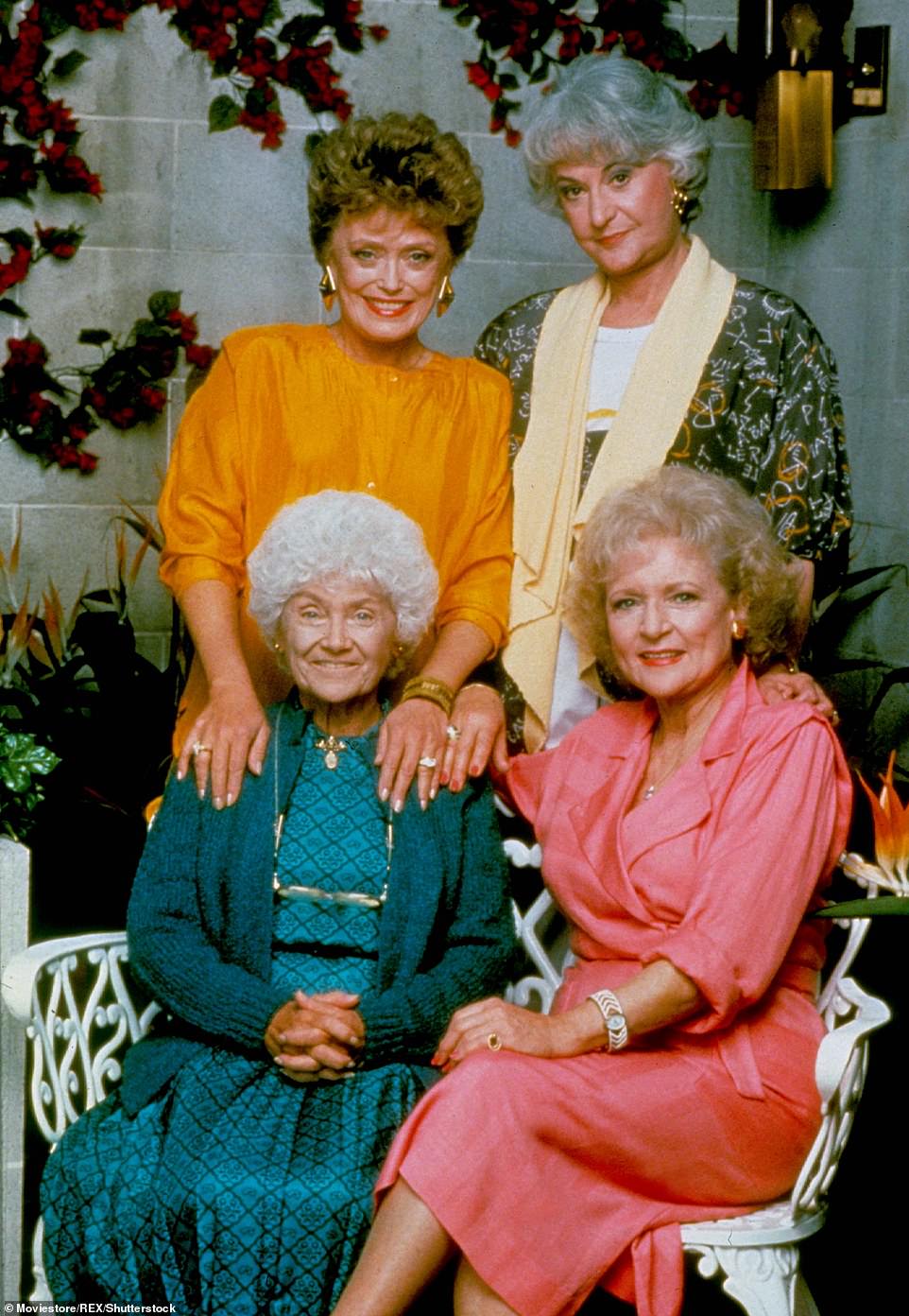 She won another Emmy in 1986 for The Golden Girls, a sitcom about four older women living together in Miami that featured an age demographic rarely highlighted on American television (Pictured: Rue Mcclanahan, Estelle Getty, Betty White, Bea Arthur)

A young fan started a Facebook campaign to have White host ‘Saturday Night Live’ and she ended up appearing in every sketch on the show and winning still another Emmy for it.

The Associated Press voted her entertainer of the year in 2010 and a 2011 Reuters/Ipsos poll found that White, then 89, was the most popular and trusted celebrity in America with an 86 percent favorability rating.

White’s witty and brassy demeanor came in handy as host of ‘Betty White’s Off Their Rockers,’ a hidden-camera show in which elderly actors pulled pranks on younger people.

‘Who would ever dream that I would not only be this healthy, but still be invited to work?’ White said in a 2015 interview with Oprah Winfrey.

‘That’s the privilege … to still have jobs to do is such a privilege.’

White, who had no children, worked for animal causes. She once turned down a role in the movie As Good as It Gets because of a scene in which a dog was thrown in a garbage chute.