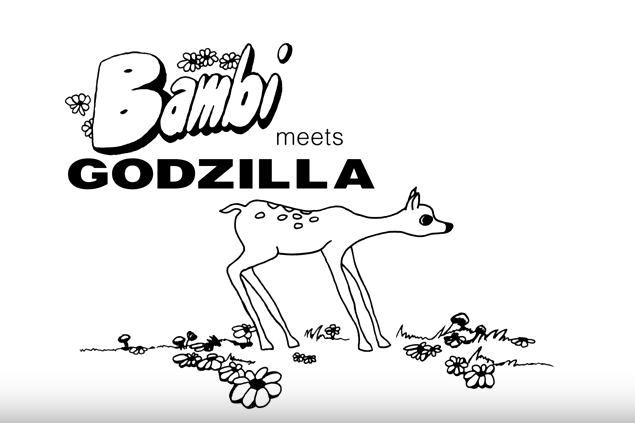 
In 1994, Jerry Beck edited the book, The 50 Greatest Cartoons: As Selected by 1,000 Animation Professionals, which challenged experts to create a ranking of the best short, cel animated cartoons ever made. To no one’s surprise, the experts chose 10 Warner Bros. animations crafted by Chuck Jones. They also gave a nod to Fleischer Studios’ original Superman cartoon, Disney’s first animation with Mickey Mouse (1928’s “Steamboat Willie”), and the Donald Duck-starring WWII propaganda film,“Der Fuehrer’s Face.”

Yes, the big animation studios (Warner Bros., Disney, etc.) dominate the list. But a few “indies” manage to squeak in there. Take for example Winsor Mccay’s seminal 1914 creation “Gertie the Dinosaur.” Or Bambi Meets Godzilla. A student film created by Marv Newland in 1969, Bambi Meets Godzilla (above) runs only 90 seconds. Of which, 48 seconds are devoted to the opening credits, and 27 seconds to the closing credits, leaving only 12 seconds of “action,” which is mostly stillness. The timing is the funny.

The short film circulated in theaters across the U.S., shown before screenings of Philippe de Broca’s feature film King of Hearts. Over the years the publicly-available versions of Bambi Meets Godzilla became worn and faded. So, in 2013, Coda Gardner produced a frame-for-frame HD re-creation. You can watch it below.

Note: An earlier version of this post appeared on our site in 2016.

Would you like to support the mission of Open Culture? Please consider making a donation to our site. It’s hard to rely 100% on ads, and your contributions will help us continue providing the best free cultural and educational materials to learners everywhere. You can contribute through PayPal, Patreon, Venmo (@openculture) and Crypto. Thanks!

Watch the Trippy 1970s Animated Film Quasi at the Quackadero: Voted One of the 50 Greatest Cartoons of All Time

Watch the Oscar-Winning “Gerald McBoing-Boing” (1950): It’s Ranked as the 9th Greatest Cartoon of All Time