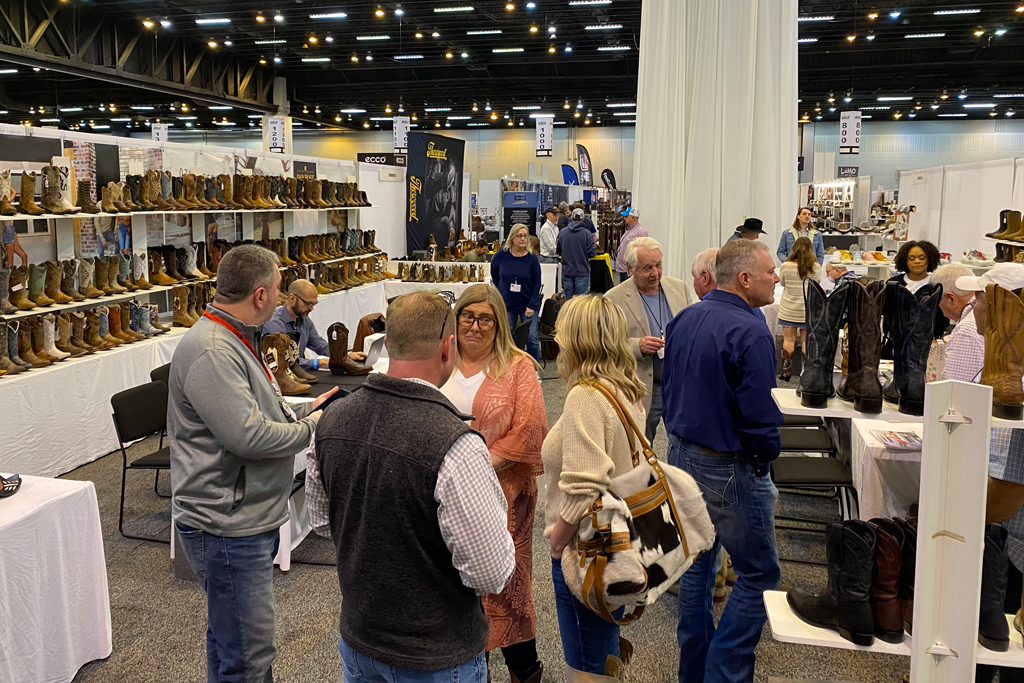 
The Atlanta Shoe Market wrapped up its February edition today, and the twice-annual trade show attracted large crowds, with more than 1,500 brands represented and 2,000 registered retailers.

Laura Conwell-O’Brien, executive director of the Atlanta Shoe Market, told FN that the event exceeded its pre-pandemic levels from February 2020. She noted that the show also attracted a larger selection of international vendors from Portugal, Spain, Brazil and elsewhere. And a greater number of non-U.S. retailers were in attendance, as were buyers from major companies including Rack Room, Famous Footwear and HSN.

Both brands and store buyers were all smiles at the show, grateful to be back in person and to be feeling the boon of a strong holiday season and continued consumer spending in January.

Garrett Breton, president of Comfort One Shoes, said that his chain of stores has experienced huge gains in its e-commerce business over the past two years, which has helped offset some slowdowns at its locations in Washington, D.C.’s office districts.

As for comfort-fashion brand Ara, it capitalized on recent sales momentum by debuting its first men’s line for fall ’22. The made-in-Italy collection consists of roughly 37 styles, ranging from dress looks to Gore-Tex performance hikers, retailing for $200-$240. According to EVP Bruce Kaplan, many better independents have already placed orders for the line, including Comfort One, Benjamin Lovell Shoes, Hanig’s Footwear, Littles Shoes and Lucky Shoes.

Kaplan noted that Ara decided to launch the collection after hearing that its retail partners were struggling to find inventory amid the ongoing supply chain slowdown.

Indeed, product delays were a constant subject of discussion at the Atlanta Shoe Market. Brands reported that production out of China has returned to a more normal timeline, but Vietnam is still working through its backlog after factories were closed for months last year. Meanwhile, shipping capacity out of Asia is still limited and increasingly expensive, and delays at U.S. ports remain a major headache.

Companies such as Pajar and Rieker said they have been less impacted by the slowdown, thanks to their diversified manufacturing operations, which includes production hubs in Europe.

At the show, Montreal-based Pajar was touting its new fashion collaboration with designer Anna Sui that debuted on the runway at New York Fashion Week this month. The series of fuzzy boots are made with faux fur and will launch this fall in better department stores in the U.S. and abroad, such as Selfridges, Le Bon Marche and Ssense.

Rieker, meanwhile, was presenting the second season of its new Revolution brand, which debuted for spring ’22. It features lifestyle sneakers for men and women, retailing for $130-$160.

Mark Denkler, president of the National Shoe Retailers Association, told FN the supply chain issues prompted many NSRA members to shop the show for new and alternative products. “There are certain brands that you can’t get. So [retailers] are here looking for different people to fill those spots,” he said.

Denkler noted that independent retailers have also been forced to make changes in their assortments as more brands mimic Nike and Crocs and scale back their wholesale partnerships in favor of direct-to-consumer channels. “But one good thing about being an independent store is you can more easily adapt and go somewhere else,” he said.