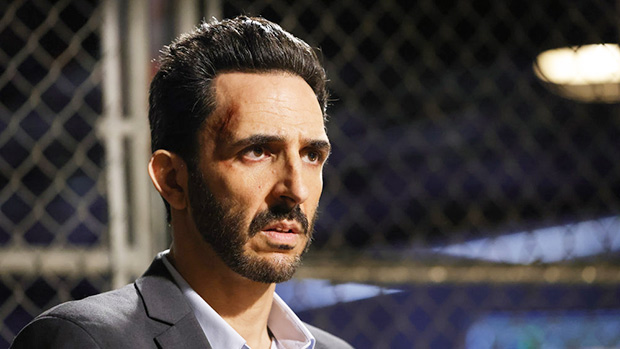 
Alina stops by Aram’s office while he’s in the process of evaluating each team member’s performance. She asks Aram if he’s done her performance review yet. She seems a bit agitated when asking Aram about it.

“Because if you haven’t I was hoping to talk to you first. You know, give you an update about my condition before you report it to Main Justice,” Alina says in this EXCLUSIVE preview of the April 29 episode of The Blacklist.

‘The Blacklist’: Photos Of The Hit NBC Series

Alina tries to explain where she’s coming from and not make Aram feel like he’s lying in the review. “Look, I love this job. You know how much I love being in the field. I’m afraid if they see it they’ll sit me down, and I can’t handle that,” Alina admits to Aram. Aram is definitely conflicted about Alina’s request.

“I’m not sure I can leave it out entirely, but I guess I need to think about it. But I will think about it,” Aram tells Alina. That’s all Aram can give Alina for now. Alina thanks Aram and leaves. Being the new leader of the Task Force comes with some hard decisions, that’s for sure.

Hai Giang: 5 Things To Know About The ‘Survivor’ Season 42 Contestant

Earlier in the season, Alina helped Ressler cheat his drug test so he wouldn’t lose his job. Ressler became addicted to drugs after Liz’s death. Alina got to a point where she was “done helping” Ressler until he started helping himself.

The synopsis for April 29 episode — titled “Laszlo Jankovics” — reads: “Red questions the whereabouts of a former associate. The Task Force hunts down a criminal dealing in illegal psychedelics.” The Blacklist season 9 airs Fridays at 8 p.m. on NBC.