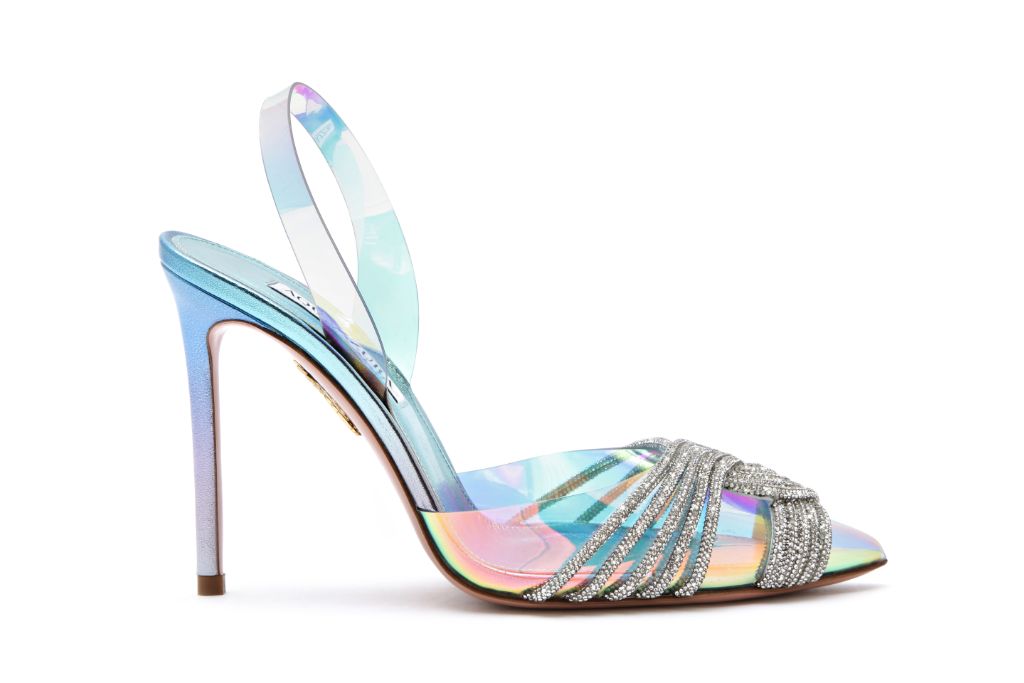 
In its ten years on the footwear scene, Aquazzura has firmly established itself as purveyor of some of the sexiest, most glamorous shoes out there. Fans have always flocked to founder and creative director Edgardo Osorio’s statement heels, but lately the brand has ventured into even larger pop cultural moments, with a few blockbuster film credits (on Ana de Armas in the James Bond film “No Time To Die,” on Lady Gaga in “House of Gucci”) joining a steady stream of A-list red carpet cameos: Meghan Markle, Kate Middleton, Taylor Swift to name a few. Aquazzura heels have even been spotted on the shoe queen herself, Sarah Jessica Parker, in the “Sex and the City” reboot, “And Just Like That”.

It was a really great moment,” Osorio told FN at his fall ’22 presentation during Milan Fashion Week, referring to some key styles that made an appearance in the HBO Max series, including his Sundance Plateau metallic platform and similar styles, plus the bestselling, red carpet staple, the crystal-studded Tequila sandal. “Her stylist (costume designer Molly Rogers) came into the store, she liked the shoes and bought a bunch them — and then kept coming back for more. We didn’t reach out. It was just a nice beautiful coincidence.”

The same went for “House of Gucci,” with the designer only finding out about the shoe cameos while watching the film in the theater. “I was in New York at the Chelsea cinema and I was screaming, ‘Oh my God! That’s another shoe!’ Because I didn’t know until I saw the movie,” said Osorio.

The brand’s fall ’22 collection is just as cinematic. Osorio is well versed in the statement jewelry shoe, and this time around it came in a few iterations with clever updates. Standouts include a series of colorful heels in jewel tones such as peridot and fuchsia, featuring satin straps decorated in baguette crystals along with oversized emerald-cut Swarovski crystals imbedded into a stacked heel. “It’s using crystals, but in a more graphic way,” he said of the Swarovski collaboration.

There were also black and metallic heels with a cascading crystal ankle detail that mimicked vintage chandelier earrings and an expansion on his disco ball heel series. Boots also made up about half of the collection, done mostly in sleek suedes and velvets, including a black velvet ankle and knee boot with crystal lacing all the way from the collar to the toe.

But fall ’22’s glitzy shoes are just one of the new collections that Osorio will debut for the brand’s ten-year anniversary in 2022. The designer is also set to unveil a collection of tabletop items at the Salone di Mobile in June, the latest from a series of home and interiors focused projects that he has been working on for the past few years. After a 2017 collaboration with De Gournay that may have singlehandedly help to reignite a passion for wallpaper in home decor trends, Osorio also partnered with Officine Gullo for a kitchen collaboration last year, in which the designer used his own new digs in Venice as the canvas with which to explore a new medium of creation.

“It’s like a new life. I always love entertaining and I think when you invite somebody to your house, it’s really personal, really intimate,” said Osorio. “(Venice has) really had a post pandemic boom. It’s a wonderful place to go and sketch and work. I always like to escape to somewhere by the sea to sketch.

The tabletop collection will be Osorio’s alone, and it suggests an expansion for the brand years in the making. “It was a project of love, but it’s also a moment where brands are doing well when they expand,” he said.