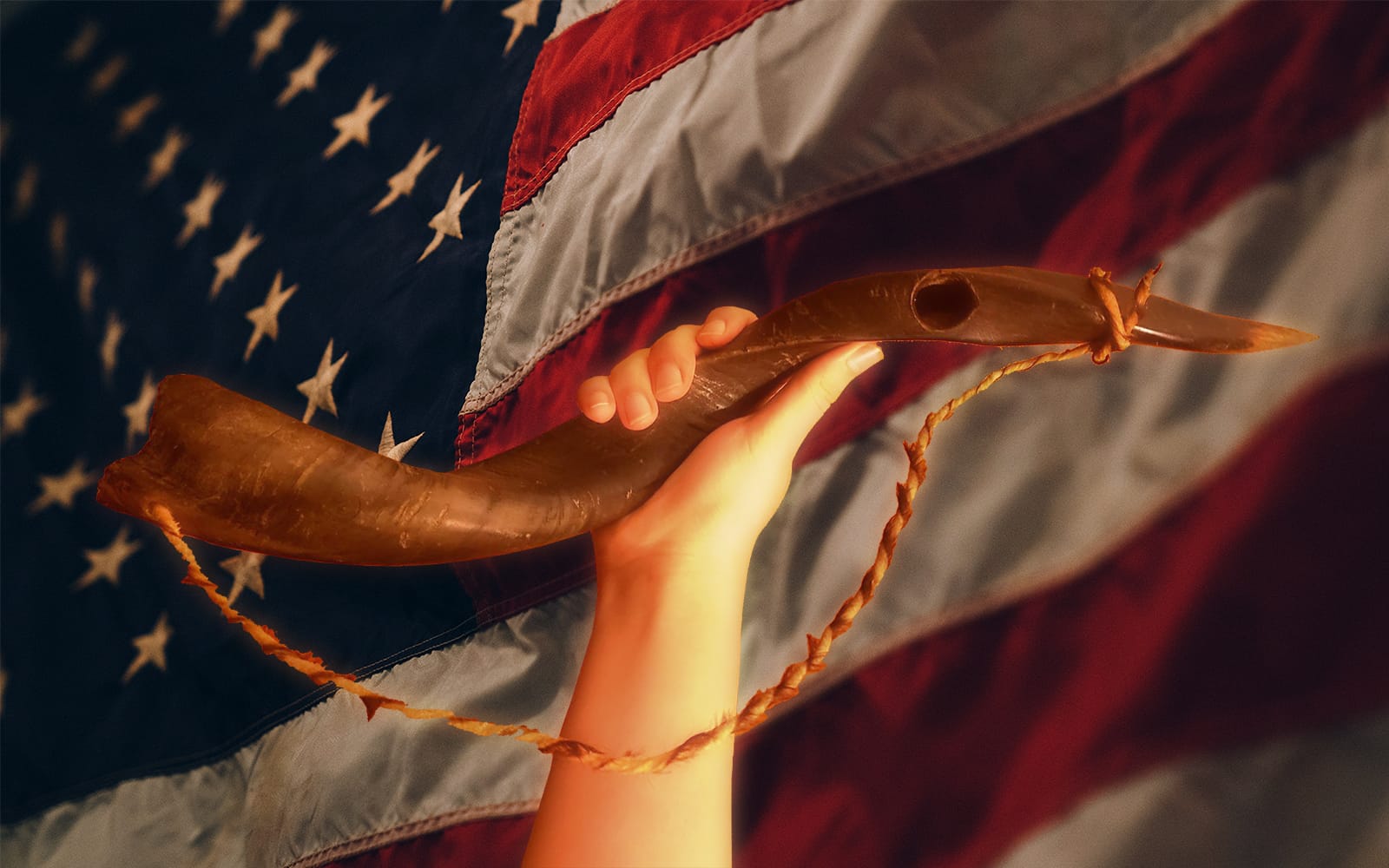 
The prayer conference began with a trio of men taking their places center stage and blowing shofars (ceremonial ram’s horns). One shouted, “Our worship is our warfare!” The crowd erupted in raucous applause, with cries of “Yes, Jesus!” exploding like firecrackers around the room. A group of modestly dressed female praise dancers came out twirling tallitot (Jewish prayer shawls) over their heads as the worship team played a set of popular Messianic Jewish worship songs.

Most of the event’s attendees cheered this display as an expression of their philosemitism. I understood what conference organizers were trying to communicate with their opening act: They wanted to demonstrate their unshakeable support for the modern State of Israel while, at the same time, baptize their event with symbols and rituals drawn from Jewish practice as a visible expression of their longing for both personal spiritual power and corporate spiritual revival in America.

All of this activity should have left me feeling affirmed since I’m a Jewish follower of Jesus. But I felt uncomfortable as I saw the shofars and tallitot used as cosplay accessories without any context or explanation. Event organizers may have felt they were honoring the Jewish people with these displays, but it read to me like cringe-inducing religious cultural appropriation.

The Cambridge Dictionary defines cultural appropriation as “the act of taking or using things from a culture that is not your own, especially without showing that you understand or respect this culture.” Well-meaning ignorance may be behind some forms of religious cultural appropriation, but in many other cases—such as the conference I just described—the appropriation is rooted in a mashup of political and religious apocalyptic triumphalism that seizes what it wants from another tradition and uses that to suit its own purposes.

Discussions of cultural appropriation are now mainstream, as evidenced by the recent apology by Asian American actor/comedian Awkwafina for her past use of African American Vernacular English. But while writers in the Jewish community and some mainline church circles have addressed religious cultural appropriation, this uncomfortable conversation has been painfully slow to take hold in the Evangelical world. It’s time for that to change.

I identify as a Jew who loves Jesus, but appropriation of Jewish symbols and rituals is a question with which I’ve had to wrestle in my own life, in part because most in the Jewish community call me a “convert” or believe my faith has made me a traitor to my people. I understand (and grieve) that my very existence is viewed as appropriation by many in the Jewish community, and as a baffling puzzle by some in the Church.

I write often on Jewish-Christian themes, and devoted half of my 2016 book, Moments & Days: How Our Holy Celebrations Shape Our Faith, to unpacking the meaning, history, and practice of the Jewish calendar in order to educate Christians about the roots of their faith. For years, whenever we’ve had the opportunity, my husband and I have offered educational Passover Seder presentations to church groups. In doing so, we communicate that, when he instituted communion, Jesus himself appropriated familiar symbols used to recount the story of God’s deliverance of the Jewish people from their slavery in Egypt.

There is no single boundary marker that codifies what religious cultural appropriation is and isn’t. For example, when it comes to Christ-focused Passover Seders, a few rabbis are supportive of Seders for Gentile Christians as an educational and bridge-building tool, some choose not to engage the debate directly, and many others call it appropriation. But even those in the Jewish community who accept Christianized Seders draw the line when it comes to Passover-based outreach and education efforts like the Christ in the Passover presentations offered by missions organization Jews for Jesus. Evangelism is viewed as an existential threat and the most noxious form of appropriation by the majority of the Jewish community.

I’m grateful that someone reached out to me and introduced me to my Messiah more than four decades ago. Because Jesus and his first wave of followers were all Jewish, I’ve never viewed myself as a “convert” in the Church. That said, while the Church has not always been an easy place for me to live out my identity as a Jewish follower of Jesus, I believe I have a responsibility to urge my Gentile brothers and sisters to begin with the pages of their Bibles and respect the foundational ways in which the story of the Jewish people has shaped their own faith and practice.

That has meant stepping into sometimes-uncomfortable conversations in the Church, while taking every opportunity presented to me to educate. But in the last few years, I’ve also had to stand against some (including some Messianic Jews) who’ve chosen religious cultural appropriation in order to advance a particular political point of view.

The National Day of Prayer events in DC have featured a handful of tallit-wearing Messianic Jewish leaders blowing shofars, as did the Jericho March events. In fact, the morning of January 6, 2021, hours before the insurrection unfolded, writer Yonat Shimron penned a piece about the use of shofars as a call to rally the faithful to political action, explaining:

Shofar blowing has become commonplace in many evangelical gatherings and political demonstrations far removed from any Jewish or Israel-related themes. Most recently, they’ve been used at worship leader Sean Feucht’s open-air concerts defying COVID-19 restrictions, at counter protests opposing Black Lives Matter and in various Stop the Steal events, such as the one that took place on the steps of the Supreme Court on Dec. 12, and, of course, at the Jericho March this week. In these protests, the shofar is typically plastered with images of the American flag or red, white and blue colors.

The presence of some Messianic leaders wearing prayer shawls and blowing shofars at these events may imply to a politically conservative audience that the broader Jewish community is honored by this kind of activity. While it may be true that some in the Jewish community have cautiously welcomed support for Israel from zealous Christian Zionists, precious few are rejoicing at appropriation in the name of Christian nationalism.

These displays aren’t read as pro-Israel by most of the Jewish community. One scholar called it “inverted anti-Semitism,” according to an October 2020 profile of the trend in Forward magazine. Blogger Pesach Lattin took his concerns about appropriation one step further: “Christians aren’t praising our faith, they are slaughtering it, and taking the leftover skin to wear in defiance like some Hannibal-inspired villain.” It’s important for shofar-blowing Evangelicals to know that some in the Jewish community view the whole of Christianity as an appropriation of Jewish faith and practice. And it’s even more critical to remember that two millenia of anti-Semitism by those who’ve worn the label “Christian” are an essential point in any conversation about religious cultural appropriation.

Like the Church, the Jewish community contains a broad range of convictions among its adherents, and a spectrum of opinion regarding religious cultural appropriation. Thus, there are no tidy formulas or easy answers. But the questions demand some serious reflection, and a willingness to consider other voices besides those in our own spiritual echo chambers.

I would like to see my siblings in faith in the Evangelical and Charismatic communities do some honest wrestling with why they’re doing what they’re doing when they nab and use symbols from other faiths and cultures. Does that mean churches need to lay aside any practice tinged with even a hint of appropriation? Frankly, in some cases, the answer will be “Yes.” Full stop. In other cases, the answer may be a solid “Maybe,” with the questions leading to deeper engagement and respectful dialogue with people from those faiths and cultures.

As a result, some practices may disappear from the platform of public worship and political rallies, instead becoming a part of the education and formation component of Church life. Some Christians may discover that they need to lay down the shofars at their prayer meetings in order to better hear the concerns of those outside of their own church circles, precisely because they are the neighbors Jesus is asking us to love in the same way we love him.