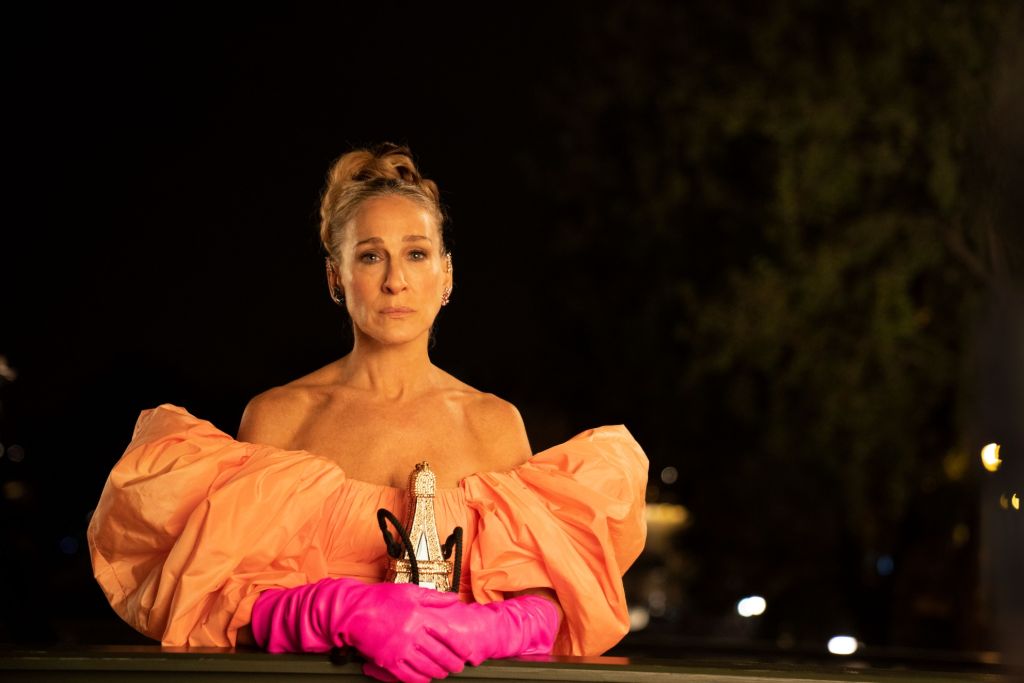 
The series finale of “And Just Like That” brought Carrie Bradshaw back to the bridge in Paris where the original “Sex and the City” left her at its series finale: with Mr. Big.

It was a wistful, sweet ending with a nod to the original 2004 scene that was both definitive in its story arc for Carrie, with her happily-ever-after with Big (at least then) and a fashion moment that not only went full circle on Carrie’s opening credits tutu look but forever cemented the character as one of the most stylish TV or film characters of all time. (It is also reportedly one of actress Sarah Jessica Parker’s favorite looks from the show and a dress that Vanessa Bryant now owns).

The series went on to add two movies — and a slew of criticism on everything from anti-feminist messaging to lack of diversity and a lack of general reality. Still, many were willing to throw all of that aside and just enjoy the fashion.

But for any “Sex and the City” diehards hoping some of that fashion “zsa zsa zshu” from the original series would make its way into the reboot, it wasn’t so straightforward or as fulfilling as the OG.

Just as the new series received a healthy dose of criticism for its clunky approach to diversity and inclusion, the fumble of Mr. Big (and actor Chris Noth as a real-life controversy met the moment) and puzzling story lines, fans also questioned the fashion choices: Are the opera gloves actually a symbol of Carrie’s post-pandemic OCD or just another accessory? Were the new characters able to replicate the statement fashion that Samantha carried so well? And why so many hats?

In spite of all that, there were still some genuine fashion sparkles. Herewith, a look at the good, the bad and the ugly of the “Sex and the City” reboot “And Just Like That.”

“And Just Like That” returned to its characters in their mid-fifties and with a wardrobe to match. 55-year-old Carrie knows that she can’t run around in a revealing tutu (not without a specific reason, at least) or crop tops or the infamous naked dress. It was refreshing to see the absence of that old chestnut of an older woman trying to look younger. And while Miranda may have decided to dye her hair back to red at the finale, she spent most of the season wearing her grays loud and proud. And don’t get us started on the fabulousness of the carefree and cat-suited Seema Patel.

The cameo of Carrie’s Fendi Baguette might square nicely with the Y2K fashion revival, but it’s also a beloved item for loyal SATC fans. Seeing the sparkly, sequined bag make its return was a shot of pure fashion adrenaline — even if it did come attached to one of Carrie’s more lackluster ensembles.

It wasn’t just the Fendi Baguette that Carrie brought back out. She also slipped on her old Versace tulle ballgown (the one she wore while waiting for Aleksander Petrovsky in a fancy hotel suite). It wasn’t exactly the first time the character would rewear a look — remember the Christian Dior newsprint dress that she almost got ride of in the first movie? A bona fide fashion girl like Carrie promoting the recycling of garments goes a long way in messaging.

From Rock’s Oscar de la Renta floral gown with Converse and owl hat (and a major “they-mitzvah” hot pink suit) to Che’s sleek genderless all-black looks, there was a fresh view on fashion from the series’ newer characters, a welcome addition to the girls’ cisgender personal style.

It’s so bad it’s good. When Carrie finally makes it to Paris, to the bridge where Mr. Big reunited with her in the original series finale, where she will scatter his ashes, she is once again dressed to the nines, in an impossibly voluminous peach gown with fuchsia opera gloves, square-toed Roger Vivier heels and a Judith Leiber crystal bag in the shape of the Eiffel Tower. The bag is from the same brand that created the cupcake bag that held Carrie’s phone (which a toddler Lily mistakenly answers just before Carrie and Big’s wedding, setting off the twist in the first “Sex and the City” movie). But that wasn’t the first Judith Leiber appearance — Mr. Big’s first gift to Carrie wasn’t a piece of jewelry but a crystal-encrusted bag in the shape of a swan. How fitting that Carrie’s send-off to Big would be in a bag that directly alludes to that first gift.

Heels at all cost

While everyone in real life took the pandemic as an opportunity to discover the wonders of Birkenstock (if they hadn’t already), Carrie clearly did not. Upon an upcoming hip surgery (due to a congenital birth defect and not a hip replacement, which would be the more realistic procedure for someone who walked the entirety of the island of Manhattan in the highest platforms heels that Aquazzura sells), Carrie proclaims that the only time she bought flats was a pair of Tom’s in 2007. When she is finally forced to wear Birks, she styles them in the worst way possible, with white athletic ankle socks (and not the good ones) self-proclaiming that she looks like a “Vermont art teacher.” Someone needs to clue Carrie in to let her know that Birkenstocks have hit the runways, many times over now.

They just kept coming. From a plate-like disk for Mr. Big’s memorial service to an origami shape paired with a ratty flannel while unpacking boxes in her storage unit, Carrie’s hats seem to reflect her stages of grief, from severe compartmentalized to floppy and messy. It’s a striking visual metaphor, but also a cringeworthy task for the viewer to take in. The lowest was undoubtedly a flopper from episode 6, a glaring contrast to Carrie’s new shiny apartment, equal parts “Blossom,” 1980s Gunne Sax ads and “Anne of Green Gables.”

The death of the Manolo Blahnik Hangisi

We can accept Mr. Big’s death, but the water-stained satin Manolos? One of the most popular shoes of all time deserved better than its shower-soaked ending in the first episode. Plus, a more realistic (and true New Yorker) storyline would have had Carrie taking those pumps to Jim’s Shoe Repair on East 59th, begging them to save her engagement heels. Forget Mr. Big’s ring going down the drain — save the shoes!

The outfit may have been a comic foil to the chic jewelry designer neighbor that Carrie was trying to impress, but the look is now part of the full “Sex and the City” fashion canon, and not necessarily with said context. Carrie has had so many major fashion moments through the franchise. Unfortunately, this one is now catalogued there forever, housecoat, latex gloves and all.