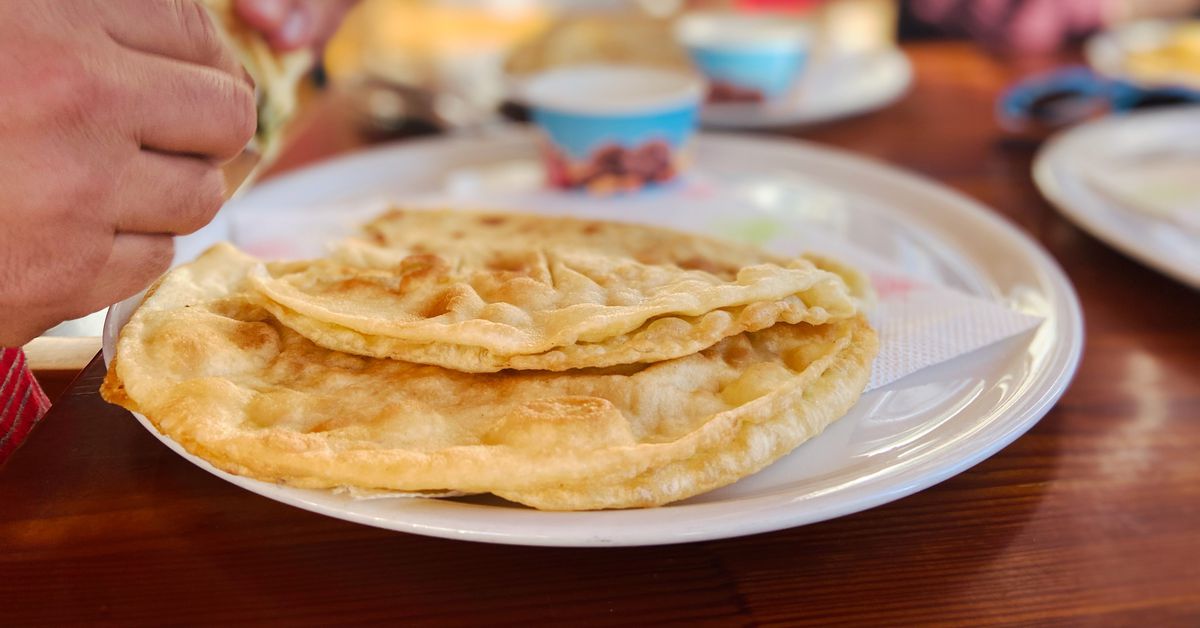 
There are no signs or boards to help find the Kabul-Shengjin Cafe. The small Afghan restaurant is tucked away at the south end of a five-kilometer stretch of the Shengjin Beach, in a quiet little coastal town by the Adriatic Sea in Albania. Anyone looking need only follow the aroma of fried dough and spices, and listen for the Bollywood music. This winter, when many of its neighbors were closed, the brightly lit cafe bustled with energy and life. A hand-scribbled whiteboard outside proudly declares its modest but much sought-after delicacies: bolani (stuffed fried bread), dogh (savory yogurt drink), and samosas (stuffed fried pastries).

Even with a small menu, lack of tourists, and a definite rising chill in the air, this new cafe was packed with customers dining in or waiting for their pick-up orders when I visited in December. Its success emerges from the shared tragedy of a community escaping persecution; a majority of “regular” diners at the Kabul-Shengjin Cafe, much like its proprietor, 22-year-old Walwala Jalalzay, are refugees who were evacuated from Afghanistan after the Taliban seized power in August last year.

“I hadn’t even dreamed that such a thing would happen to me, that I would lose my home, my country, separated from my family,” Jalalzay said. A recent psychology graduate and an employee with the American Council, Jalalzay became a high-value Taliban target when the insurgent group took over the Afghan capital in August. The Taliban have a history of suppressing women’s rights and restricting freedoms. Since the takeover, the group has beaten, tortured, and imprisoned many Afghans, particularly women like Jalalzay, who have worked with the Americans and other international allies.

With the help of her employers, Jalalzay was put on an early evacuation flight leaving Kabul, but as a single young woman, she was not allowed to bring any dependents. “They only counted spouses and children as dependents, not parents and siblings. I cried so much when I realized I had to leave my family,” she said. Jalalzay was brought to Albania, which is hosting nearly 3,000 Afghan refugees, of which about 1,200 are staying in Shengjin. “I still cry when I think about all that happened. I miss my mother.”

Not wanting to sit and wallow, Jalalzay was determined to make the best of her opportunity. She volunteered part-time at the refugee center, providing literacy and English-language training as well as driving lessons to fellow refugees. But that wasn’t enough; she wanted to do more with her time. “One day, I was walking by the beach and I noticed these empty shops that were closed for the season. I wondered if I could perhaps lease the space and do something with it. I know many of us here miss our Afghan food, and I thought it might be nice to book the place for a couple of days and just cook for the community here,” she said.

The owner of the space, an Albanian woman who did not wish to be named, was reluctant when Jalalzay and her business partner, Maryam Aslami, first approached her. She warned them that the cold weather would keep customers away, but Jalalzay and Aslami’s plan of serving Afghan food to the displaced Afghan community moved her. Along with giving them the space for free for four months, their benefactor also covered their utility bills. She explained to them that as someone from a country that experienced similar conflict and displacement in the 1990s, she could relate to the suffering and loss of Afghans. Jalalzay remembers her saying: “Our story is the same and I can feel your pain. I admire your resolve and want to do something for you.” And so, the cafe opened in November last year, and has been a lifeline for the Afghan refugees in the area since.

The Kabul-Shengjin Cafe, named after the two cities Jalalzay has called home, offers a glimpse of a life back in Afghanistan that feels further away than ever. It is decorated with the few little things that the young refugee businesswomen were able to bring along with them in exile. An Afghan flag hangs prominently on one of the walls overlooking the sea. At any given time, the cafe is serving a mixed bag of Afghans seeking culinary nostalgia, and an occasional few Albanians or tourists who’ve stumbled upon the cafe while exploring the beach.

Jalalzay purposefully kept the menu choices slim. “We wanted to keep items that are easiest to make and also affordable in terms of our investment and for customers, since we are all refugees and have very little spending power,” the young entrepreneur explained.

The bolani, a popular Afghan street food of fried bread stuffed with things like potatoes and chives, is the star offering. The cafe also has samosas and parathas, which require similar ingredients, and which can all be served with the restaurant’s tangy tomato chutney. “And, of course, dogh, since no serving of bolani is complete without a glass of dogh,” says Jalalzay. The cafe sometimes offers sheer chai (milk tea) too, since the weather often calls for something warmer.

The cooking is supervised by Aslami’s mother; she created the recipes and drops in for a bit each day to make sure the kitchen is running smoothly. “We had to customize some of the recipes to the ingredients available here, and experiment with a few techniques to make sure that the food was authentic to what you might get in Afghanistan,” she shared. When they couldn’t find gandana (chives) for the bolani, they swapped in green onions. “But because green onions can be a bit more pungent to taste, we steam it for a few minutes before we use it to remove the harshness,” she explained.

Their customers aren’t complaining about any workarounds. The cafe consistently gets about 50 customers a day, and some even visit twice a day. “It also depends on what meals are being served at the refugee center. Sometimes when the food there isn’t great, we get a spike in customers,” Jalalzay said. While the restaurant may not be turning huge profits, Aslami and Jalalzay are able to cover the costs. “But it was never about money for me,” Jalalzay said. “It was about being independent and doing something that I can be proud of. I can see how happy the Afghans get when they come for bolani or dogh.” she said. “It gives me so much joy to see them happy.”

Along with building her restaurant, Jalalzay is rebuilding her own life left in disarray by the crisis. As she waits for her asylum case to the United States to be processed, she has learned that she has an aptitude for business and might want to continue to pursue it when she gets to the U.S. “Operating this business has also taught me so much and the experience has made me more keen on wanting to work on [a] business, particularly in the food and restaurant industry. I am really enjoying doing this, and I think I may have the caliber for it,” she said. “Perhaps I can make the bolani business into an international operation and open a branch in the U.S. too. If KFC can have branches all over the world, why can’t a bolani restaurant?”

The Kabul-Shengjin Cafe also serves another purpose: It fulfills Jalalzay’s commitment to serving her people, even in exile. “In my country, girls are being undermined, they are prevented from going to school, or to work. I want to show what Afghan girls are capable of.”

Since the takeover, the Taliban prevented the reopening of girls’ high schools and universities for many months. Many Afghan women professionals across sectors also lost their jobs as the Taliban imposed restrictions on women’s movements. “It took us years of hard work to get this education, develop our skills… and they destroyed everything,” she said. “We lost Afghanistan, but Afghanistan also lost its prized talent; doctors, teachers, lawyers, and even business owners were forced to flee the Taliban.”

Jalalzay seeks inspiration from the Afghan women who continue to resist the Taliban. “This tragedy has also brought me new perspective on my people. I realize how committed Afghans are to our values, especially the women. I witnessed first-hand these last few months how Afghan women have overcome so much and yet remain so brave in the face of tragedy,” she said, adding that Afghans had become adept at rebuilding from tragedies. “We have lost so much in these few months, that even if the Taliban leave today, it will be a lot to undo the damage they have inflicted,” she said. “But I would go back in a heartbeat to rebuild the country if they left.”

But for now, she has a business to run, and an asylum application to wait on. Jalalzay has built the cafe as a safe space for Afghan refugees, including herself, to heal from their grief. “So far from home, and dealing with their trauma, the simple meal seems to relieve their pain and makes them smile.” 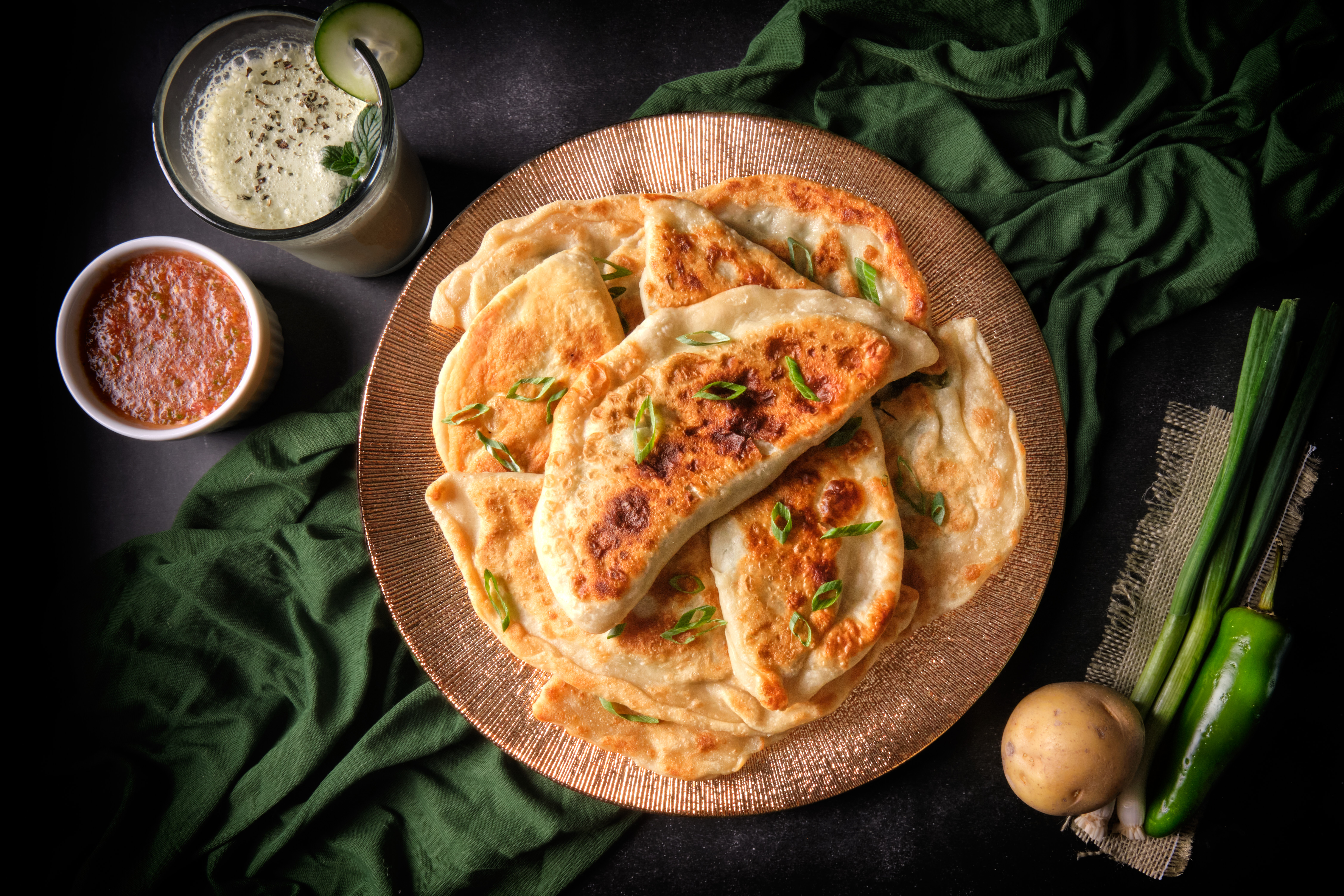 Ruchi Kumar is a journalist who reports on conflict as well as political and cultural stories of India and Aghanistan.