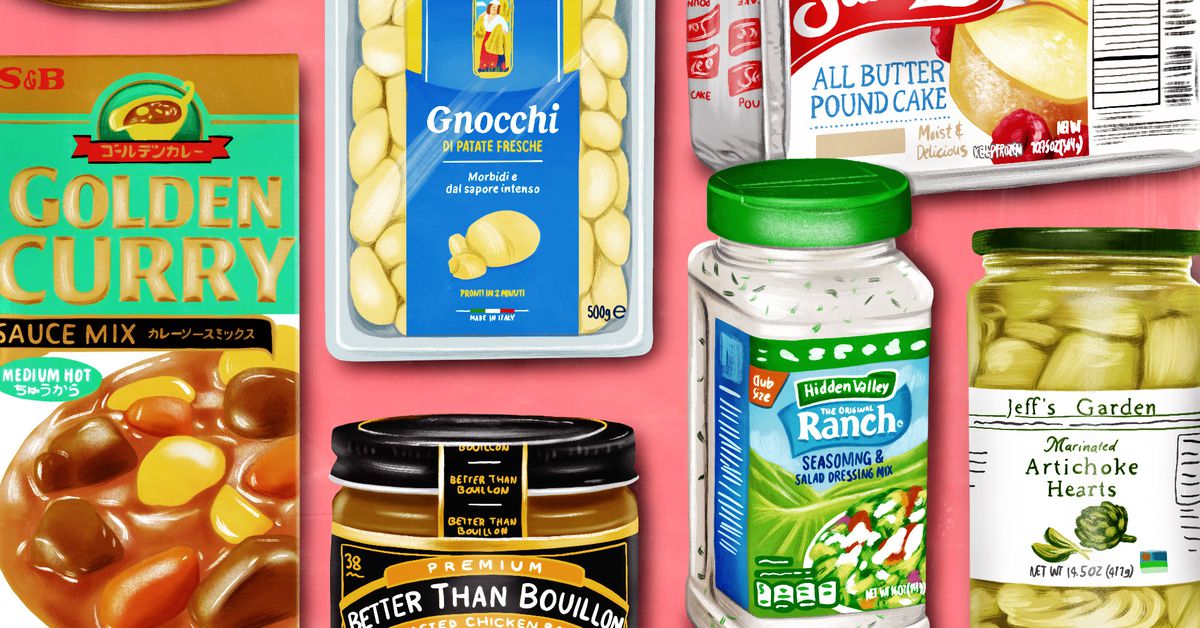 
Cooking from scratch is an art form, but a democratic one whose benefits anyone can enjoy. That said, sometimes you’re low on energy, time, inspiration, you name it, and suddenly store-bought isn’t just an acceptable alternative to cooking from scratch — it’s better. Regardless of what certain home-cooking purists may believe, semi-homemade can be just as good as homemade — particularly given that we happen to be living in a golden age of premade ingredients.

When you’re deciding which premade ingredients to incorporate into your cooking repertoire, it helps to first take a Socratic inventory of your cooking style, habits, needs, annoyances, et al. If there’s a weeknight dish you return to constantly, ask yourself which premade ingredients would be good to have on hand. How much time do you actually want to be cooking? Homemade sauce and fresh pasta, when done right, are incomparable… but maybe you’re too hangry (or busy) for that. The best ready-to-use ingredients are the ones that make things practical.

It’s also a good idea to practice quality control: While premade ingredients are definitely labor-saving, there’s always the possibility of a compromise in standards. Try not to snag the first can or jar that catches your eye — when it’s possible, do some research into the manufacturer to learn more about their processing methods and the raw materials they use.

One more thing to keep in mind: we cooked (and are still cooking) through a whole pandemic. To make practically every single meal for almost two years is a massive undertaking, one that has strained the dedication of even the most enthusiastic home chefs. So give yourself a break. Go ahead, buy that frozen pizza — along with any of the ingredients we recommend here.

Stock cubes walked so that Better Than Bouillon could run. Its ratio of salt to brothy flavor is less than you would get from cubes, meaning you can build flavor while having more control on salinity. It’s great to make roux for rich stews such as gumbo.

“I like having curry cubes on hand because Japanese-style curry is one of my favorite ways to use up odds and ends in my fridge,” says Leanna Rongavilla, an LA-based baker. No one batch of hers is the same, and that — along with convenience — is precisely what she loves. “A single zucchini, a small portion of thinly sliced pork belly, and carrots went into my last,” she says. “Grated apple, dark chocolate, and coffee are twists I’m excited to try out next.”

Marinated artichokes — fully seasoned, quartered, and oh-so-meaty — ruined fresh whole ones for me. I like to toss a couple in salads or on a slice of white pizza. And when I’m craving pasta, Emma Laperruque’s fabulous recipe on Food52 for easy marinated artichoke pasta sauce is my go-to.

I speak not just as a home cook but as a former employee of a frozen-food startup and urban farmer when I say: Frozen produce is fantastic. The best is processed IQF, or individually quick frozen, meaning that each piece is frozen separately as opposed to in whole clumps. Picked, cut, and flash-frozen at peak maturity, frozen fruits and veg can hold more nutrients and flavor than raw produce. They’re super practical for smoothies, stir-fries, and one-pan bakes like the Any Frozen Fruit and Cornmeal Cobbler from Simply Julia. I find Whole Foods has a great affordable selection; Stahlbush Island Farms never fails to stun with their incredible collection, which features boysenberries and diced sweet potatoes.

One box of frozen puff pastry can give you apple turnovers, curry puffs, Vietnamese pate chaud, and chicken pot pie. Having it stocked in your freezer is how you succeed in baking without really trying. Food blogger Sabrina Lour has sworn by Pepperidge Farm sheets for years. “I’m always pleased with the consistency of the dough,” she explains. “It’s dairy-free [hello, lactose-intolerant friends!], puffs up beautifully, and yields a nice golden, flaky crust.”

I never laid eyes on a whole garlic bulb until I went off to college. My Korean mom exclusively buys pre-peeled cloves because many of the traditional dishes she makes require a lot of garlic and with that, more complicated cooking steps to focus on outside of mise en place. Garlic is a just-grab-from-the-fridge thing for her, and it always has been. Dan Pelosi, an avid home cook and recipe developer, has also recently converted in the name of self-care. “I know every trick to easier peeling, but just having some at the ready saves me so much time,” he says.

One note for buying peeled garlic: Make sure it looks fresh. When you peek inside a jar or bag, the cloves should be cream-colored (not yellow) and plump in shape.

Whipping up a homemade cake certainly isn’t an impossibility, what with boxed mixes or one-bowl recipes that can offer a quick fix, but even so, it’s not the speediest process. To that end, store-bought pound cake is a dependable decadence for those days when there’s an hour until your dinner guests arrive and oh shoot, you forgot to prep anything for dessert. Run to the store to grab a loaf, then cut thick slabs onto plates and top with two more grocery store heroes: vanilla ice cream and fruit preserves. It’ll satisfy your guests and make the queen of store-bought compromise herself, Ina Garten, extremely proud.

There will be instances when something homemade and its grocery store counterpart don’t perform quite the same way. But the key is to accept those differences and cook accordingly. Case in point: Ali Slagle’s crispy gnocchi, a dish that calls for putting packaged gnocchi in the broiler, not a boiling pot of water, to accentuate its taut texture by way of searing and browning. Slagle, who developed the recipe for NYTCooking, says that the best store-bought gnocchi is “the one that you see the most at your grocery store, because one of their perks is their immediacy.” For her, that’s De Cecco. “[De Cecco Potato Gnocchi] crisp without disintegrating, unlike some brands, especially refrigerated ones, which tend to be softer,” she explains. On top of that, she adds that they don’t have an intensely sour taste found in others — “that’s the preservatives talking.”

In 2020 alone, Costco sold approximately 101 million rotisserie chickens, which at a fixed cost of $4.99 is a better bargain than a raw bird you’d have to season and cook yourself. If rotisserie chicken hasn’t yet secured a permanent spot on your shopping list, what’s stopping you? From tearing it off the bone or shredding it into Cobb salads, pot pies, and pulled chicken sandwiches, it’s a versatile ingredient I always have on hand. And while I once heard an alarming story about how someone accidentally left out a rotisserie chicken for three months and it didn’t go bad, I’ll take that as a tell-tale sign that one bird can be stretched out for a whole week’s worth of quick meals.

Seasoned grain packs have come a long way from boxed Rice-a-Roni — now you can find a range of nutritious whole grains and pulses that come in numerous flavors. I want to give a shout-out to Maya Kaimal’s Everyday Dal line because it offers plant-based spins on traditional Indian lentil dishes. Whether I opt for a lentil or chickpea dal, I always know it will come together in a solid 90 seconds, taste like it’s been simmering for far longer than that, and please my constant hankering for Dishoom until I can safely travel back to London.

And with that, I share an icon, a legend, a savior for carb-lovers with a low threshold for waiting for slow rice cookers. To piggyback off of Amber Lee, having a couple packs of Hetbahn stocked in your cupboard means you’re never too far from having fluffy white rice to buddy up with eggs and SPAM, the aforementioned Japanese curry, or any number of leftovers for many satiating meals.

As a recipe nerd, I’ve dug through tons of recipes for homemade ranch seasoning and romanticized the notion of actually executing one of them. But until I become the fantasy version of myself who DIYs spice blends, I know I can count on a bottle of Hidden Valley ranch seasoning for that nostalgic flavor without dunking my food into a pool of dairy dressing, which sounds great theoretically, but realistically I can no longer stomach. And in the here and now, that’s the stuff that fantasy is made of.

Justine Lee is a Korean-American freelance food writer and pro-turned-avid home baker based in New York City.
Juliette Toma is an illustrator based in Los Angeles.